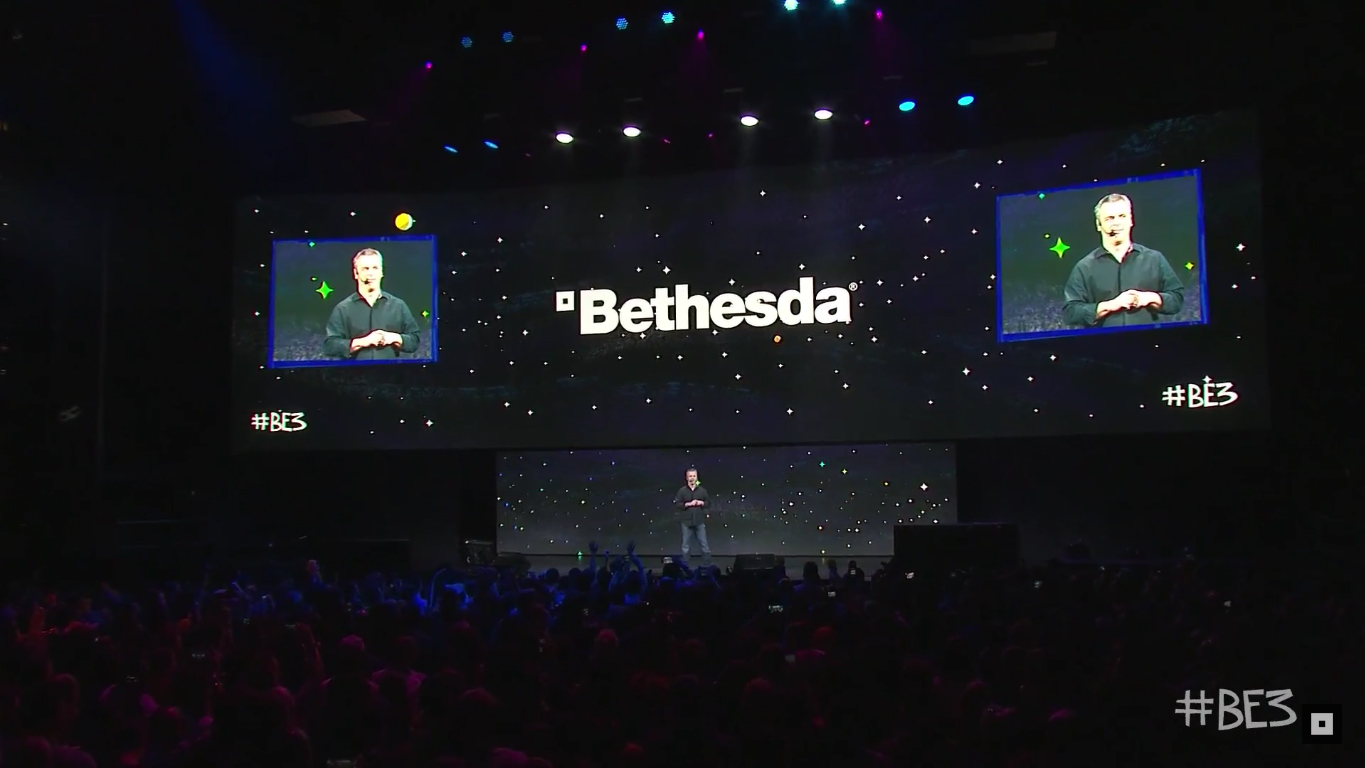 Companies could learn a thing or two from Bethesda’s use of talking heads in their E3 2017 opening reel, relying on actual developers and their kids for some genuine emotions and responses. They did fall back on players and live-streamer reactions afterwards but still, it was nice while it lasted.

As for the show proper, it was arranged as a theme park tour — in the aptly named “Bethesdaland” — exploring various games on multiple platforms. It seems that they’ve also fully embraced the whole retro aesthetic and sound design courtesy of Fallout, which is something we’ll gladly support.

Here are the games showcased, all of which are releasing this year.

Interestingly, Doom VFR seems to retain the fast-paced action the shooter is famos for, and we’re incredibly curious how that translates to a nausea-free virtual reality experience.

Already shown off at E3 2016, Falluot 4 VR is finally set for a release later this year. The gameplay pretty much looks the same except for the shooting segments, since the weapon is no longer fixed to our perspective. It’ll be an interesting shift for Fallout in particular as it needs to blend with the VATS aiming system. If one thing’s for certain, though, it’s that stepping into a suit of Power Armor will now feel so much more awesome.

The Elder Scrolls Online has come a long way with its recent Morrowind update, which has proven to be a much-needed breath of fresh air for the MMORPG. The game has been free-to-play since 2015 so this sounds like a good time as any to hop back in and see what’s new.

Creation Club – A hub for official Skyrim and Fallout 4 content

Coming to PC, PlayStation 4, and Xbox One users this summer, the Creation Club will host add-on content for The Elder Scrolls V: Skyrim and Fallout 4, ranging from items and abilities to brand-new gameplay. Unlike other mod hubs out there, this will be an official collection run by Bethesda, external development partners, and the best community creators to guarantee their compatibility with the base games and other official add-ons.

This is Bethesda’s second attempt at paid modding. They tried it on Steam back in 2015 only to face huge blowback, forcing the company to backpedal and keep its head low. This new approach restricts it to their own Bethesda.net platform and content, utilizing prepaid credits, although it can’t be considered DLC in the traditonal sense as there’s an open call for Creators.

Deckbuilding card game The Elder Scrolls Legends is getting an expansion titled Heroes of Skyrim, which adds more than 150 new cards, new mechanics such as Shout, and new creatures such as – you guessed it – dragons.

Shouts will have three different levels of power, their increase measured by the number of times it’s been used. Bethesda are also teasing cards that can raise the speed of Shout progression for some juicy combo material, with further details coming soon.

Additionally, there’s a note on Companions:

“The Companions are represented by a spin on the Change ability introduced in The Fall of the Dark Brotherhood. Companions will change into their Beast Form when you break a rune. Beast Forms are often more powerful, and bringing the beast out can even trigger abilities.”

Heroes of Skyrim releases on 29 June for PC, Mac OS, iOS, and Android on 29 June.

The Elder Scrolls V: Skyrim generated huge waves for the Nintendo Switch’s early reception, pointing to major third-party support for the new console. Now that the well-deserved fervor behind The Legend of Zelda: Breath of the Wild is starting to slow down, the time ripe for the Dragonborn’s portable experience.

This isn’t a simple cut-and-dry port, of course. Bethesda has implemented support for Amiibo, and tapping one on the device will spawn a treasure chest. In the above trailer we got to see a whole array of Zelda-themed goodies, although just why they didn’t use the game’s stunning soundtrack is beyond us.

Other modifications include motion controller support, utilized for both melee and ranged combat.

The Switch version will come with all official DLC. No specific release date was mentioned, presumably so that Nintendo can drop the news themselves later this week.

Dishonored: Death of the Outsider – A new chapter by Arkane

Billie Lurk reunites with her mentor Daud for what will be “the greatest assassination ever conceived in Dishonored: Death of the Outsider.” For anyone confused by the title, this isn’t DLC – it’s a standalone title developed by series creators Arkane Studios. And as the title plainly puts it, the two characters are out to kill the Outsider.

The game releases on 15 September for PC, PlayStation 4, and Xbox One.

Quake established the idea of esports back in 1996. With Quake Champions, Bethesda and id Software hope to take things to the next level.

Events are aleady in motion. The Quake World Championships will take place on 26 August in Dallas, Texas, id Software’s home turf, and the prize pool is set at a cool US$1 million dollars. It may seem like one of the many forced attempts at generating a competitive scene around a game but Quake has a pedigree and, more importantly, an audience that hasn’t exactly been catered to by the first-person-shooter industry at large.

E3 2017 also set the stage for some new additions to the beta. Wolfenstein‘s B.J. Blazkowicz has been added as Champion alongside three new maps, a new Tri-Bolt weapon, and other new and improved features. While it’s still a closed beta, they’re slowly starting to let more people in (and they have to if they want to generate interest in the championships). Sign up for the game here.

The Evil Within 2 – New horrors on Friday the 13th

It was only towards the end of the press conference that we got to see some brand new reveals (if you haven’t seen the leaks, that is). First in line is The Evil Within 2 with some fantastic visual imagery and snippets of horror. Players now fill the boots of one Detective Sebastian Castellanos, at the lowest point of his life following the loss of his daughter, Lily.

He’s soon presented with the chance of saving her, yet doing so requires diving headfirst into the nightmarish world we see in the trailer above. There’s certainly more of that The Evil Within-brand of horror going on, with just a touch of F.E.A.R. to it. Players may choose to either go stealthy or take the survival-horror approach with limited ammunition.

Interestingly, the trailer makes no mention of Shinji Mikami, the man behind the first game, Resident Evil, and Dino Crisis. You’ll have to visit the official website to get positive confirmation, where you might as well check out the screenshots.

Wolfenstein II: The New Colossus – Best trailer of the show

That is, hands-down, the best trailer coming out of Bethesda’s E3 2017 conference.

Built on the id Tech 6 engine, Wolfenstein II: The New Colossus sends players right into Nazi-controlled America to recruit remaining resistance leaders. There’s an excellent cutscene in a diner with a Nazi commandant, followed by later funny moments, that clearly show a redoubling of efforts on the storytelling front.

And to remind everyone that gameplay hasn’t taken a backseat, the trailer cuts to some glorious, high-fidelity shooting chock-full of impressive lighitng. Oh, it all ends with a guy tripping on acid too.

Wolfenstein II: The New Collossus releases for PC, PlayStation 4, and Xbox One on 27 October.

Short and sweet with games we’ll get to sink our hands into later this year; despite being a new player in the E3 press conference field, Bethesda are definitely coming through with a strong identity of their own. They don’t need the glamor and high-budget distractions or the long-tail hype trains, just a razor-sharp focus on the products coming our way.

Bethesda’s debut VR games will be something to look out for (especially in the wake of their legal battle with Oculus over tech secrets), as well as the public and modding community’s reception to the Creator’s Club. Those aside, the publisher has some exciting games lined up for the near future in the form of Dishonored: Death of the Outsider, The Evil Within 2, and Wolfenstein II, all descendents of highly acclaimed games. They have a good spread across various genres and platforms too, once you factor in their existing titles and the highly-anticipated Skyrim on Switch. All in all, Bethesda have settled in a comfortable, sunny spot for 2017.

Ade thinks there's nothing quite like a good game and a snug headcrab. He grew up with HIDEO KOJIMA's Metal Gear Solid, lives for RPGs, and is waiting for light guns to make their comeback.
Previous post In the Name of the Tsar: A spotlight on the Women’s Battalion of Death
Next post E3 2017: XCOM 2 expansion ‘War of the Chosen’ coming 29 Aug