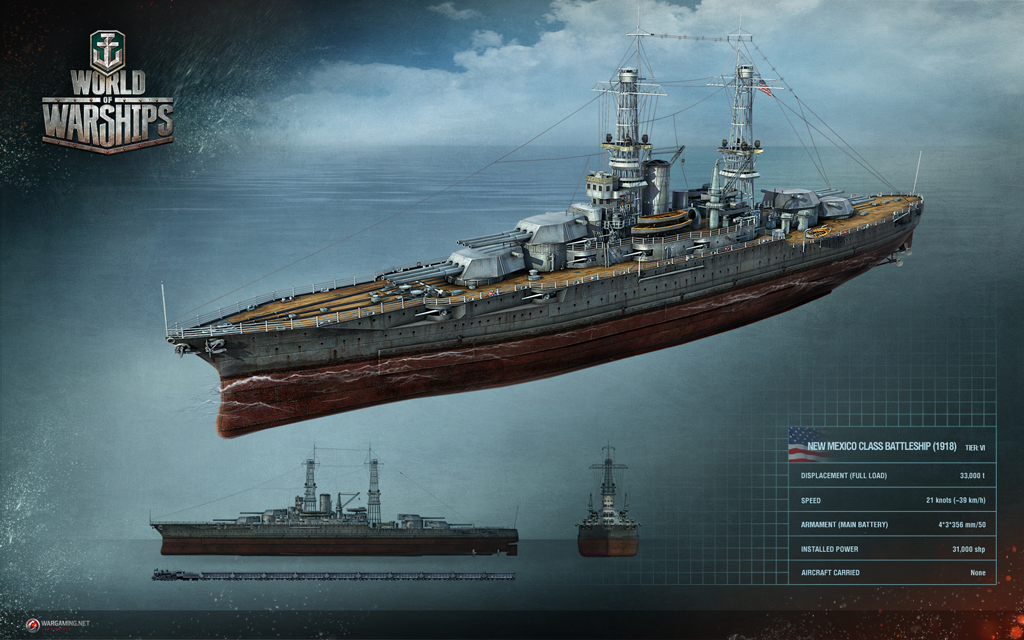 Wargaming’s World of Ships was announced some time ago, and it is only now that we get to see a playable built of the game – albeit a pre-alpha version – behind closed doors at E3 in Los Angeles.

The take on naval combat doesn’t wildly differ from that of similar games of yesteryears. Remember PC DOS classics such as Task Force 1942 and Great Naval Battles series? WWII naval aficionados will love World of Ships and more, if only for the chance to pit a mouth-watering virtual duel between an Iowa-class and the Yamato battleships.

Anyway, let’s not get side-tracked.

In Warships, ships of various classes duke it out over decent-sized maps, vying to either capture a particular area on the map or wipe out the other team. There is enough similarity to make the game feel familiar for Tanks and Warplanes players, but the gameplay has significant differences.

World of Warships will feature U.S. and Japanese ships at launch, with British and German ships planned for later. Like the other games, World of Warships will feature 15-on-15 battles of various scenario types, with one player controlling each ship. Submarines will not feature in the game, as their integration was deemed too problematic to implement. Wargaming felt that a submarine class would create a rather unbalanced game, and in retrospects, there is an element of truth to it. But that’s not to say it won’t happen in the future, it’s just not happening now.

There are four featured classes of ships: aircraft carriers, battleships, cruisers and destroyers. Aircraft carriers are more of a support class, and they are best positioned well away from the fighting. Carriers can launch AI-controlled planes of various types, such as dive bombers, fighter planes and scouts. Kamikaze is not an option, as we found out, due to sensitivity considerations.

Battleships and cruisers are the heavy and medium ships, respectively. These ships bring more firepower with their bigger and more numerous deck guns. Sort of like your heavy tanks in World of Tanks. Their heavier armament and thicker armor comes at the price of reduced speed and maneuverability, thus increasing your desired range from the enemy. Battleships are some of the burliest ships on the seas, but their natural counter is the nimble destroyer and its torpedoes.

Destroyers are the lightest class of ships, are lightly armored and have comparatively little in the way of deck guns. Just like the Light Tanks class in WoT – see the parallels here? However, they are also the fastest ships and have the ability to launch torpedoes. Torpedoes are launched in groups, in a fanned arc. The size of this arc can be expanded or contracted for a better chance of hitting something or to concentrate the firepower. You can see torpedoes as they travel and can avoid them, but slower ships may find that difficult to do.

Controlling planes launched from Carriers is done in a style similar to RTS games, in which you select a group of planes and point them to a particular area on the map. Carriers may have no firepower of their own, but their scouting and support abilities, when used effectively, are crucial assets to the team.

All ships are armed with some measure of flak cannons, which are controlled by the AI and automatically engage nearby enemy aircraft. Battleships, cruisers and destroyers have deck guns that can be fired in sniper mode or volley mode. Sniper mode looks very similar to World of Tanks in that you look out from your ship via a scope parallel to waterline and fire shots directly at your target. Volley mode is more similar to the SPGs in World of Tanks and allows you to lob shots over longer distances and terrain obstructions. You must lead your volley of shots to hit moving ships, but with the reload time, you can fire one volley to determine range and lead time before using subsequent volleys to dial it in.

As ships take damage, their hit points are decreased, but their buoyancy also takes a hit. Ships sink once either bar is depleted, and ships that lose buoyancy become slower and more cumbersome to maneuver. Another interesting feature is that some areas of the map are considered shallow water, where larger ships cannot enter. This serves a strategic purpose, allowing smaller ships, such as destroyers, to traverse the map while larger ships, such as battleships, must go around.

Wargaming has yet to announced a commited release date for World of Warships, although a beta run is scheduled for the first quarter of 2015.

Aaron Yip is an industry veteran with more than 15 years of experience. When not spending time on his gaming PC and consoles, he can be found in Hyrule solving ungodly puzzles and collecting gems.
Previous post E3 2014: Have A Trailer For Dead Island 2
Next post Empty Your Wallets! The Steam Summer Sale Begins