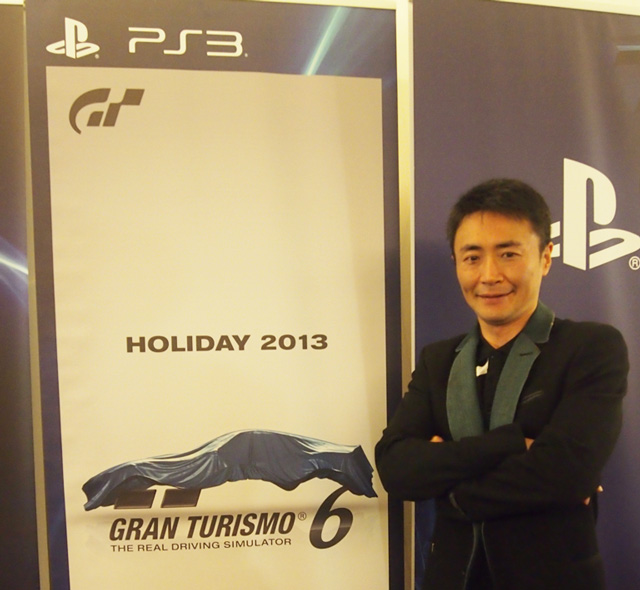 RGB: Yamauchi-san, could you please share with us the game’s development update since the game’s announcement at Silverstone?

Yamauchi: This time during E3 we introduced the new FIA GT3 cars that we’ve added to the game as well as locations such as Willow Springs and the new Gemasolar Solar Power generating facility in Spain. At Silverstone, we introduced the new physics engine and rendering engine. We showed a slight comparison in the trailer at Silverstone but we told everyone then that we will be producing a better representation of what was shown back then. In this trailer that we released in E3, you can see the difference in visual fidelity very clearly.

And in regards to the rendering engine to the game, what we’ve attempted in Gran Turismo 6 for the PS3 is to really bring in the graphics that is equivalent to the PS4. The features like the adaptive tessellation that we introduced in the trailer will be a feature that’s actually a next-generation type of rendering technology but there’s meaning in bringing that into the PS3.

RGB: There were some aspects of social and game sharing in the previous two GT games. Will there be any new or updated social elements added to the upcoming GT6?

Yamauchi: Hmm…it’s something that we can’t really get into much detail yet, but what I can say at this point in time is that there will be more. But, Gran Turismo is not a social game, so we have to be careful in balancing how much social aspects we have in the game. We’ll import what is required for a racing in terms of social interactions.

RGB: Could you please share with us the car roster?

Yamauchi: GT6 will have 200 new cars more than GT5. There are premium cars, but we are not going to differentiate between premium and standard cars anymore when we move on to GT6 because we aim to get rid of all the functional differences between the two. They will now have the same functions. More or less anyway.
RGB: At ChinaJoy last year, you mentioned that you would like to showcase more of the GT series in the China and regional countries. Are there plans to include, say, the Shanghai racing circuit into the game?

Yamauchi: The Hong Kong media asked us of this as well, if the Hong Kong track will return in GT6. But you have to consider the fact that it takes one year for us to create a new track for the game. We can’t commit to a timeframe at this time, although I can share with you that it has been something we would want to do. But we just don’t know when yet.

RGB: Were there any plans to turn GT6 into a PS4 launch title? Because it’s interesting that we’ve seen three GT games (including GT6 now) on the PS3, wouldn’t it makes more sense to develop a GT launch title for the PS4?

Yamauchi: The PS3 already has an install base of 70 million console units around the world, so it makes more sense to release on that platform first and also because there are a lot of users waiting on that platform for the new game. Once the players have actually played the game on the PS3 platform, that would be the timing when the next Gran Turismo would come out. We know we could do more on the PS3 platform and push the limits of the platform to what it is capable of.
RGB: Naturally you are not going to share with us your plans for the PS4

Yamauchi: (Laughs) The PS4 is at the same launch timing as GT6 for the PS3, so obviously we don’t have the time and resources to be making two GT games simultaneously. Of course, we love technology so we are definitely thinking about the PS4. Once our players have played enough of GT6, then we can talk about a GT on the PS4.

Aaron Yip is an industry veteran with more than 15 years of experience. When not spending time on his gaming PC and consoles, he can be found in Hyrule solving ungodly puzzles and collecting gems.
Previous post E3 2013: Hop On The Second Screen Bandwagon!
Next post E3 2013: Closeup Shots of the PlayStation 4