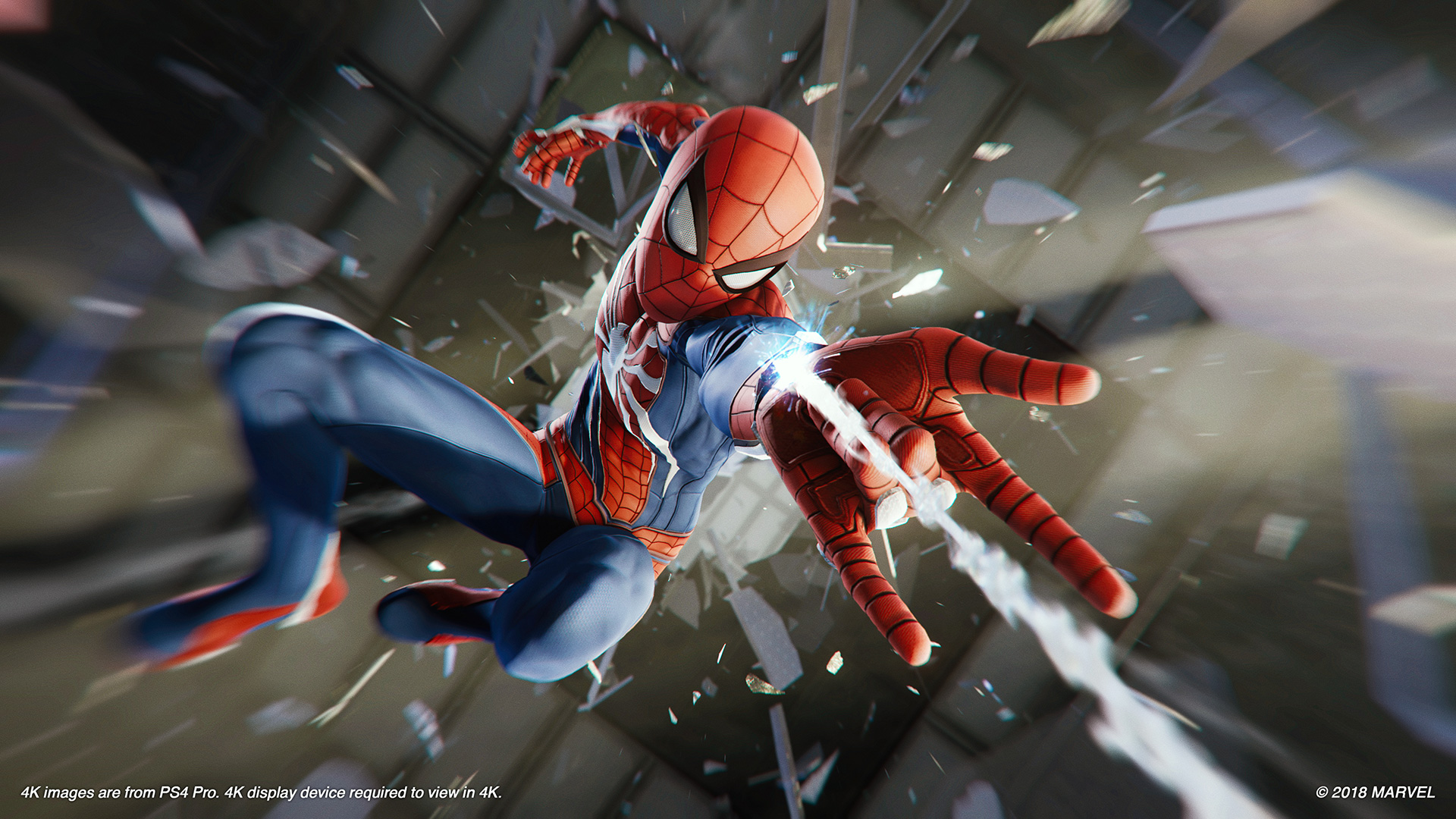 With the phenomenal God of War behind us, PlayStation has been busy setting up Marvel’s Spider-Man as the next must-have exclusive of the year. The spectacular E3 2018 gameplay showcase and handsome limited edition console have already left fans buzzing, but what we still know little about is the game’s story.

Unlike most licensed projects, Insomniac Games have been given relatively free reign with the Spider-Man universe. Rather than rehashing Spidey’s comic origins or squeezing in some connection to the Marvel Cinematic Universe, they’re putting a seasoned 23-year-old hero under the lens — to explore the next big chapter in Peter Parker’s double life as both a budding scientist and veteran crime-fighter.

To tell us more about it and the game at large, GameAxis met Insomniac Games’ community director James Stevenson (@JamesStevenson) at a media preview in Kuala Lumpur, Malaysia. Oh, and we also managed to get an intimate hands-on session with the game.

“We’re trying to build it around the idea of respecting the DNA of the Spider-Man franchise, while also putting our own spin on it. If you’ve ever read the Ultimate Spider-Man comics by former Marvel writer Brian Michael Bendis, you know that those did a really good job of taking the Spider-Man story and giving you something fresh and new out of it and surprising you,” James said.

“A great example is — just right of the bat — the suit. It’s red, it’s blue, the shapes are all normal; the mask looks very Spider-Man-like. You instantly know that’s Spider-Man. But at the same time, it’s got this huge white spider on the front and you’ve never seen that before. Now you instantly know, “Hey, that’s the Insomniac Spider-Man. That’s the PlayStation 4 Spider-Man.”

In many ways, this is Peter’s next coming-of-age story and his journey in becoming a young adult. There are two major themes that Insomniac is using and that the game represents. The first of those is mentorship. As young adults, one of the things that we grasp is to find mentors in work and in life as we try to figure things out, and Peter finally thinks he’s found the perfect one in his career (spoiler here, so we can’t name this mentor). He continues to save New York City as Spider-Man and in Insomniac’s game, he’s been doing that for eight years already. But for the first time in his life, he thinks he might be able to actually help save the world as Peter Parker.

James: “The second theme is partnership and that’s very common in this story. And, you know, when you graduate college, university, when you go and have a job, your friends and your relationships begin to evolve. And we see that through his on-again, off-again girlfriend, Mary-Jane Watson. And through her, Pete begins to learn that it’s okay to lean on others and it’s okay to ask for help.”

How the new Mary-Jane fits into the picture

MJ is a great example of how the studio is twisting and turning things, re-imagining Peter’s most important relationships. In this game she’s not an actress or a club owner like in the comics or past movies — she’s an emerging investigative reporter at The Daily Bugle. In the hands-on that I experienced, I got excited because I didn’t just got to see little cutscenes where I hear from MJ – I actually got to play as her. MJ has her own gameplay and mechanics and it really lets you get into her story a little bit more that way.

Their approach to combat

Combat is really important in the game. Insomniac want players to feel like they are Spider-Man, who really is a master acrobatic improviser. You will get to use a combination of melee, webs, environment interaction, stealth, and gadgets. And you can switch between all those as you go, and you should because using a set of combos will earn you bonus XP that allows you to upgrade skills or unlock new combos. There are opportunities in the game where you have more of a cerebral or strategic — I always like combining those words — approach.

James: “A huge focus was to kind of take advantage of how acrobatic he is. You need to be able to dodge and use webs; juggle enemies up in the air; fight in mid-air; bounce off the wall; web zipping; swinging away; using your webs to pull the environment down on enemies; and using web gadgets. And when you combine all of those things together, you have a real sense of style as you play. And we hope that the good players will really look stylish doing it.”

Why Insomniac is the ideal studio for Spider-Man

“Insomniac has DNA that relates very heavily to Spider-Man. We’ve made a lot of gadgets over the years for Ratchet & Clank, Resistance, and Sunset Overdrive. Peter Parker makes his own gadgets too, so it’s kind of a perfect match,” James added.

“But maybe the single most important thing we had to get right was traversal and web swinging. It has to be utterly exhilarating to swing down the streets of New York. Like our history of making great weapons, we actually have a history of good traversal too. Everyone loved the traversal in Sunset Overdrive so that gave us a real running start when we began working on this open-world game.”

On getting the movement and controls just right

“We wanted something that was easy to pick up and play. To make you feel like you were an experienced Spider-Man, that you’d been doing this for eight years, but also something that had a lot of skill and mastery potential so that you could get very good at it.

“The great players will have an amazing amount of control and speed getting through the city, and later challenges will test their mastery over that. We also expanded the move set so it wasn’t just swinging around. There’s wall running and parkour, launching off of points, and web zipping. We tried to give you a whole toolbox that you can chain together.”

On working with Marvel

Insomniac have been working on this game for over three and a half years with Marvel Games and PlayStation. According to James, they worked very closely with Bill Rosemann, who is a creative director at Marvel Games and has worked at Marvel Comics for a very long time. One of the things he always said to the developer was, “The best Spider-Man stories are when Peter and Spider-Man’s worlds collide.”

So everything that Insomniac have been doing with the game from the beginning has been around that goal, of making it as much about Peter Parker’s story as it is about Spider-Man’s story. From my playthrough, I almost always wanted to root for Peter Parker. Through those themes of mentorship and partnership, I thought the studio did a fine job in delivering a memorable human story just as much as they were striving to deliver a superhero story.

What to expect in the first two hours

James: “You will meet with Spider-Man’s first big bad over the eight years of his career. It’s all led up to this confrontation with the Kingpin, Wilson Fisk, and you’re going to see that right at the beginning. Then you’ll meet the people in Peter’s life, like Martin Li, who is a philanthropist that runs the F.E.A.S.T shelters for the homeless in New York. That’s important because Peter’s dear Aunt May works at those shelters. Peter and MJ will also be thrust back into each other’s lives, as they’ve been broken up for the last six months.

“Between all those narrative missions, you can swing freely around New York. The whole island of Manhattan will be open to you after the first mission. You can check out all the different neighborhoods in the city. You can go see landmarks, like the Empire State Building, Chrysler’s Building, and Grand Central Station. Or maybe want to visit Marvel landmarks like the Sanctum Sanctorum, the Wakandan Embassy, or Avengers Tower. Of course, it wouldn’t be a Spider-Man game if there wasn’t a lot of crime to fight in the streets, so you’ll see those popping up as you play as well. Parting teaser for readers and fans

There are lot more surprises that I didn’t get to see in the build I played on. For instance, according to James, we can expect to see in the final game old acquaintances like Mayor Norman Osborn, who’s running for re-election. Brand new friends, like Miles Morales. Unexpected adversaries, like Mister Negative. Formidable forces, like Silver Sable. And of course, the toughest fight of Spider-Man’s life, the Sinister Six.

Aaron Yip is an industry veteran with more than 15 years of experience. When not spending time on his gaming PC and consoles, he can be found in Hyrule solving ungodly puzzles and collecting gems.
Previous post The Walking Dead’s Negan is coming to Tekken 7
Next post Hyperplay 2018: Interview with Riot Games’ Chris Tran