Home / Features / 10 exclusives to consider for the PlayStation 4 Pro

10 exclusives to consider for the PlayStation 4 Pro 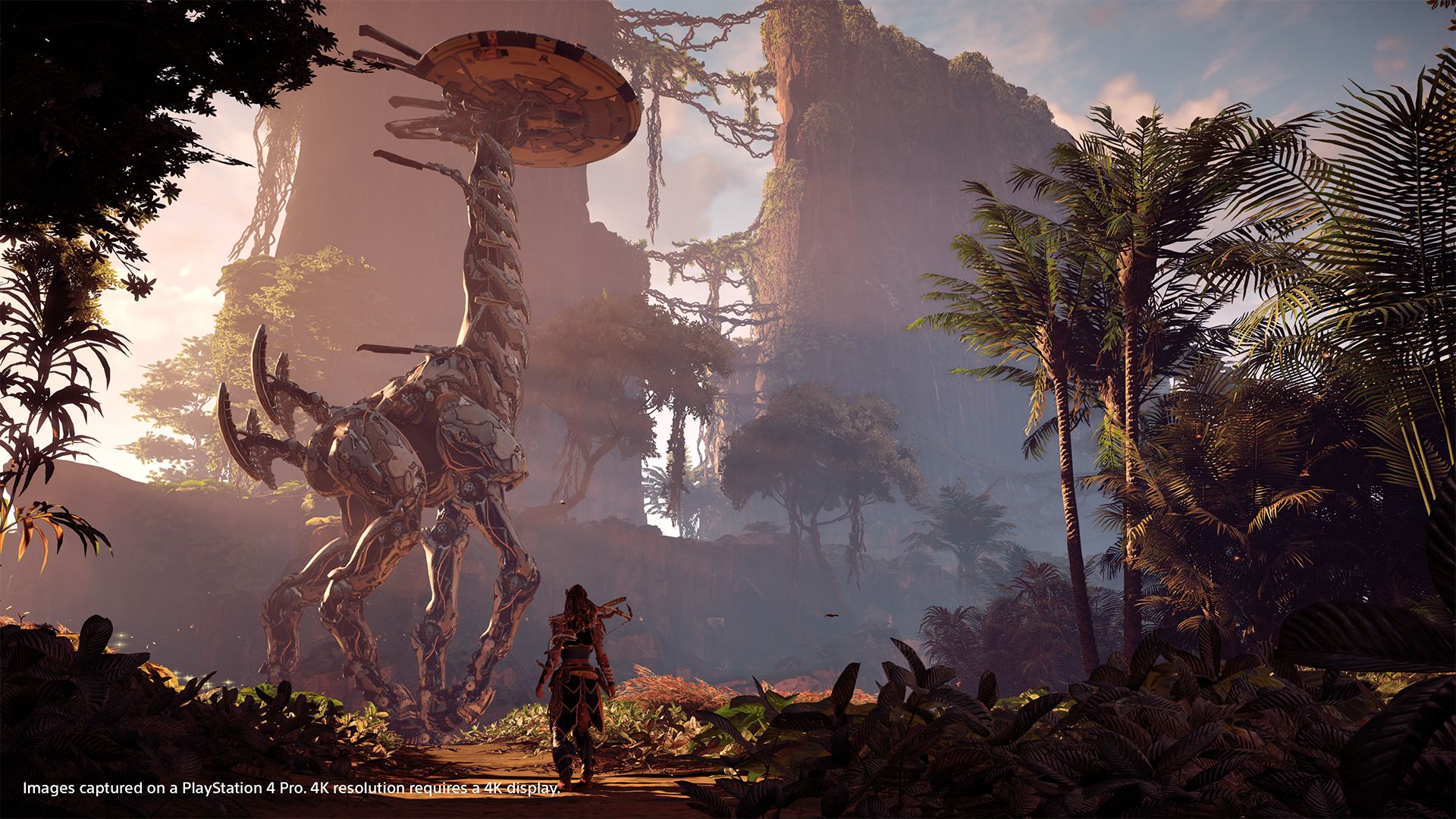 There are more than 53.4 million PlayStation 4 systems out there, a figure recently boosted by the launch of two new models: the smaller, colloquially-titled PS4 Slim and the larger, more powerful PS4 Pro. The latter has been particularly interesting, not least for its position as a mid-generation hardware update – a ‘PS 4.5’, as it were – a first in PlayStation history.

While Sony has declared their commitment to both console versions, it’s reasonable to assume that the Pro is the new benchmark. It’s the system they’ll be using for future in-game footage trailers, and the systems developers have to support in 2017 onwards.

So with that said, let’s take a look at some of the exciting Sony exclusives that take advantage of the Pro’s capabilities. We’re covering both old and new titles in this list, to showcase games that already do a fine job of it, as well as to highlight upcoming releases that plan to do so.

It’s important to remember that there isn’t any Sony mandated standard as to what constitutes a Pro improvement, though the usual suspects are high dynamic range (HDR), increased resolution, and sometimes better frame rates.

Insomniac Games run a tight ship when it comes to videogames. While the studio ditched their 60 FPS standard way back in 2009 (somewhat reluctantly), they’ve managed to keep the Ratchet & Clank series looking absolutely stellar, with enjoyable gameplay to match. For PS4 Pro they’ve added HDR and increased resolution. The technique they’ve employed, called temporal injection, will also be used for the upcoming Spider-Man.

The Last of Us: Remastered

As it stands, The Last of Us was already stunning in the original PS3 version, made to look even better on PS4 with the remastered edition. Somehow, Naughty Dog managed to squeeze even more out of the game through the PS4 Pro, obtaining HDR and higher resolutions. Admittedly it wound up performing worse, though recent patches in Dec. 2016 have ironed out most of the kinks. And you know what? Pro version or not, The Last of Us simply belongs in any PlayStation library.

The final chapter in Nathan Drake’s story, Uncharted 4 was a treat to play in every respect. And now, like a person trying a respectable pair of headphones for the first time, the PS4 Pro is shedding light on details we didn’t even know existed, thanks to the magic of HDR. They’ve also increased resolutions to 1440p and 1080p for the single- and multi-player modes respectively.

The two inFamous games are fairly “old” by current-gen standards but the PS4 Pro’s introduction made revisiting them worthwhile, at little cost to developers Sucker Punch too. At the heart of the update is HDR, which amplifies the work the work that went into creating a realistic portrayal of Seattle, focused on lighting and exposure. The greater range in color translates well for the protagonists’ super powers too, particularly the neon glow of Fetch’s powers in First Light. Wrapping up the package is, naturally, a higher resolution to better appreciate the smaller details in the open-world city.

There’s plenty to love about Gravity Rush 2, be it the art treatment or combat (stay tuned for our review this week). Shifting from portable devices to a more powerful home console was fully deserved for this unique IP, granting director Keiichiro Toyama the legroom for environmental destruction; in a game about gravity-altering superpowers, watching debris fly around and shatter is quite the sight. While the studio hasn’t directly explained what Pro improvements the game has, Eurogamer (and the amazing Digital Foundry folks) reports Gravity Rush 2 upscaling to 4K. Possibly one the most anticipated releases of the year, Nioh promises to take the popular Dark Souls formula in a new, faster direction. Developers Team Ninja have garnered plenty of goodwill by listening and tweaking according to feedback, exemplified from the changes seen in the beta demo versus the alpha. It’ll actually ship with ‘movie’ and ‘action’ graphics settings on the standard PS4; the PS4 Pro version gets options for higher resolutions, 60 FPS, and better anti-aliasing.

After a decade spent working on the Killzone franchise, Guerrilla Games are poised to stir up the industry with Horizon Zero Dawn, arguably the most prolific title on PlayStation’s calendar right now. It’s easy to see why, with its sweeping panoramas, lush flora, and robotic fauna capturing our curiosity and imagination; what little we experienced at E3 2016 managed to set our expectations pretty high. On PS4 Pro we’ll supposedly get better resolutions, better shadow maps and anisotropic filtering, as well as HDR implementation.

It seems appropriate to bring back one of PlayStation’s earliest mascots as we transition into a new phase in gaming history, one of mid-gen upgrades and virtual reality. Crash Bandicoot N Sane Trilogy resurrects the game as a “remaster plus” – rebuilding assets while staying as faithful to the original as possible, along the way adding quality-of-life improvements such as a unifed game save system. No Pro details thus far but word from PlayStation Experience 2016 is that it’ll support 4K resolutions.

PlayStation’s flagship racer hasn’t made its way onto current-gen yet but if Polyphony Digital has anything to say, it’s that the wait is going to be worthwhile. The developer is tapping on both PS4 Pro and PS VR system to bring Gran Turismo Sport to the next level in terms of immersion; for them, it means a target of 4K resolution, 60 FPS, and HDR with wide color support. That final feature is a prospect GT creator Kazunori Yamauchi has been most excited about. We’ll have details as they emerge.

Here’s another exclusive that’s going to need some extra time in the oven, just so they can bring the potential of PS4 Pro and PS VR to bear. Ace Combat 7 is the first new numbered entry in quite a while, the last being AC6 on the Xbox 360 in 2007. Producer Kazutoki Kono told DualShockers in a Dec. 2016 interview that they haven’t optimized it for Pro yet, however they “do intend to do something.” We’ll certainly keep a close watch on further developments.

This isn’t an exclusive but it’d be a disservice to not mention the work that went into Rise of the Tomb Raider’s PS4 Pro update, especially the three preset graphics options it provides: 4K 30 FPS with HDR, 1080p 30 FPS with maxed out quality settings, and 1080p with an unlocked frame rate. Offering console players this amount of choice is exceedingly rare and, frankly, is highly welcome as gamers become more familiar of their personal preferences.

Already tested these games out on a PS4 Pro with a 4K HDR set-up? Let us know what you think!

Ade thinks there's nothing quite like a good game and a snug headcrab. He grew up with HIDEO KOJIMA's Metal Gear Solid, lives for RPGs, and is waiting for light guns to make their comeback.
Previous post Halo Wars 2 Blitz beta dated for Jan. 20–30
Next post Fire Emblem Direct: Announcements for Switch, 3DS, and mobile