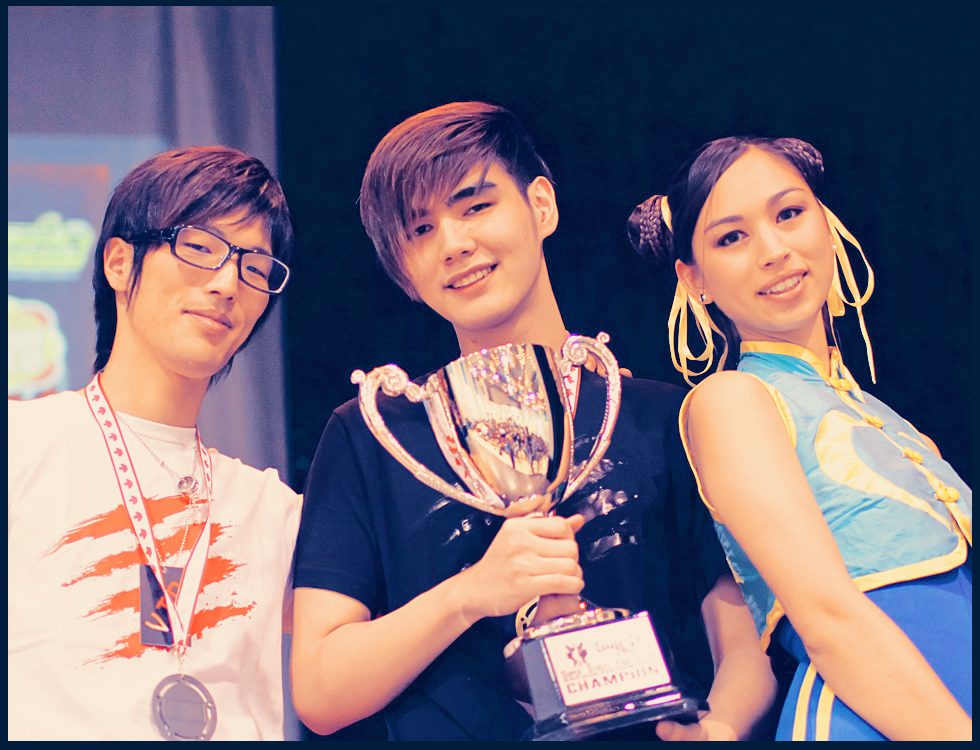 For a few years now, I have accumulated a massive amount of mileage riding on a certain Singaporean’s coattails.  Of course this feat is purely imaginary, as locals find it much too humid to wear coats of any sorts.  My benefactor is none other than a 22 year old video game prodigy, Ho Kun Xian.

Never the one to bask in excessive praise, Xian often downplays his own gaming prowess.  Just as Batman hides behind his alter-ego Bruce Wayne, so too does Xian hide his identity behind his daytime job as manager at Tough Cookie Gaming Cafe where he runs the entire store’s operation, 7 days a week.

But when the lights go out well after 3 am in morning, Tough Cookie transforms into an acoustic Batcave, and the maestro is able to conduct his symphony and develop new combos and techniques.  And while it is certainly a benign Dr. Jekyll who relentlessly experiments in the training modes of fighting games to master his craft and hone his skills, during tournaments the sinister Mr. Hyde rears his ugly face and bares his deft hands.  Perhaps there is no greater show on earth than to see his violent alter ego rip his opponents to piecemeal.

I have had the pleasure of watching Nine Tails assume full control of Naruto Xian.  The first time was 2012’s South East Asia Major, when Team Mad Catz Daigo Umehara, considered the greatest player to ever lay hands on the joystick, graced Singapore with his presence.  In an epic retelling of David versus Goliath, Xian managed to defeat “The Beast” Daigo in a legendary grand finals match.  However remarkable his victory over the Japanese superstar, many felt he benefited from home court advantage with the local raucous crowd cheering loudly behind him.

Canada Cup 2012 nullified all these inherent advantages.  Besides Evolution, Topanga League, Gods Garden, and Shadowloo Showdown, is it considered as one of the most difficult tournaments in the world to win the Super Street Fighter 4 Arcade Edition title with respect to the format and sheer number of dominant international players present.  Ironically, Hell was awaiting Xian in the freezing depths of Calgary.  By luck of the draw, he faced Mad Catz Tokido and Mago, Evil Geniuses Ricky Ortiz, Bonchan and Razer’s Fuudo during his triumphant climb to the top with a character considered mid-tier at best.

Xian often chides me for sitting beside him and giving rudimentary advice useless at the highest levels of international play.  What he does not know is that my farcical coaching is merely an excuse to watch his transcendent play from a distance a fanboy can only dream of.  Imagine courtside seats so near to Lebron James you can see the pores of his skin actually produce globules of fine sweat.  This level of access to a video game superstar is unparalleled in eSports, and I will shamelessly bask in his glory like a cold-blooded reptile heating itself in the sun’s rays until he forcibly ousts me from his side.

Our thespians skills on YouTube may have tricked a few into falsely believing that we are childhood friends when we have only known each other for a couple of years.  I first met Xian 4 years ago when he was coming into adulthood at the age of 18, brazenly wearing his N.S. army fatigues into TKA Bugis Arcade.  His resemblance to Guile stopped short at his appearance, and he quickly dissected me with his top-tier Gouki.

It was not until a few years later in Shadowloo Showdown 2011 that I was once again reunited with Xian.  The Australian dollar was kangaroo kicking every other currency in the groin, and we were brought together under one hotel roof not by some romantic gravitational pull, but by economic necessity.  Melbourne was the stage for Xian’s debut, as he vanquished the legendary Mago 2DGod in a streamed match for all the world to see.

Riding on Xian Airlines has been a turbulent journey of ups and downs.  Korea’s Infiltration has edged him at several tournaments and he has trouble handling Kazunoko’s Yun.  He has still to win a tournament for Ultimate Marvel vs Capcom 3, the hottest game at the moment.  His performance at Evolution, the most prestigious tournament in the fighting game circuit, certainly leaves a lot to be desired.

Despite these glaring flaws, Xian possesses the ultimate gift that cannot be learned nor bought: the benefit of youth.  At a tender 22 years of age, his growth trajectory is exponential and he is far from his maximum potential as fighting game players tend to peak later than their other eSports brethren.  To the envy of his peers, Xian is generously sponsored by Team Desperation Move and has a stable job at Tough Cookie Gaming Cafe.  He has a personal Twitter account manager to interact with his growing legion of fans and admirers worldwide and boasts perfect complexion.

And yet, despite these inherent advantages, accolades, and strong network of supporters, there is a sense that his recognition is not commensurate with his talent.  Mind you, he belongs in a very exclusive club of four that can play multiple fighting game titles at a high level: Justin Wong (30,000), Chris G (6,000), and Tokido (14,000), yet his own Twitter account has yet to pass the 4,000 mark.

The increasingly busy tournament season is an axe that swings both ways.  While it affords players with many more opportunities to compete for cash prizes than years past, the window of time to fully digest tournament replays before the next major event is shrinking faster than a wool sweater placed in a dryer on high heat.  This phenomenon, coupled with a premium placed on live streaming, causes a sudden drop in interest when tournament results are reported and the suspense for the final standings disappears.  “Stream monsters,” a term of endearment to describe diehard viewers of tournaments streamed online, are a ravenous horde that are primarily interested in live game.  The cold, lifeless body of a video replay does not excite their bloodlust.  If you were not watching Canada Cup 2012 live at your computer or at the venue,  you probably don’t care any longer nor have the time to wade through all the footage produced on the circuit.  Indeed, since his victory till the publication of this article, there have been no less than 5 other major fighting game tournaments competing for space in your mental hard drive.

A knee jerk answer to explain Xian’s relatively low obscurity and tournament attendance is to point the finger of blame at Singapore’s small stature, but this facile suspicion overlooks his wide local network, such as this publication, that actively promotes his legacy.  Furthermore, he has the infrastructure at work to stream at any time of the day on the Cross Counter TV’s Twitch channel and reach his fanbase instantaneously.  Rather, the primary culprit to his unwillingness to travel abroad and showcase his gaming prowess is none other than Singapore’s wide array of creature comforts.  Why fly 20 hours and eat unpalatable hamburgers before the tourney when his favorite lamb curry is right around the corner.  With payouts so low for fighting game tournaments compared to other eSports events (Ed’s Note: Valve’s total prize pot for ‘The International’ DOTA competition was US$1.6 million), its difficult to incentivise Xian to attend foreign tournaments where he must bear his own travel costs to face a legion of veteran players he has already played countless times.

As his Alfred, there are moments of sadism that wishes someone would rise from the darkness like Bane and pummel Xian in the same fashion that he once did to me.  This wish is not borne from twisted schadenfreude, but to remind them that there are monstrosities out there in the tournament scene that need to be exorcised and eradicated.  Perhaps Xian too is keenly aware of his own player mortality dictated by the frivolous fan base and he has decided recently to focus his energy in learning Ultimate Marvel vs Capcom 3 (UMVC3), the hottest game in the circuit.  Compared to Street Fighter, the UMVC3 rules afford characters greater aerial movement such as double jumps, triple jumps, mid-air dashes super jumps and flying.  Under this game system, the skies are the limit for a virtuoso player like Ho Kun Xian, even with the added gravity from a sycophant hanging on his coattails for dear life.