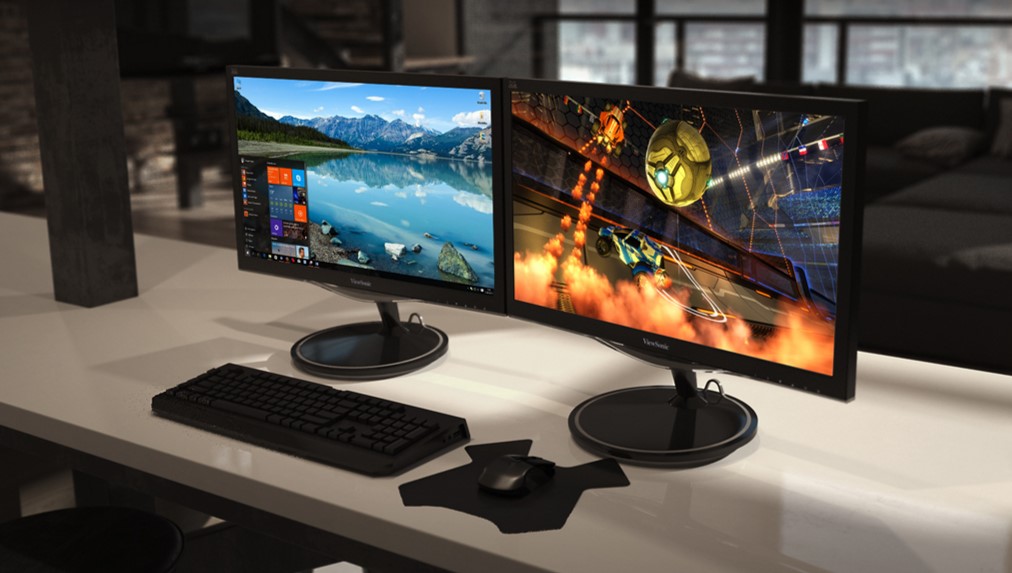 It’s easy to look at a market filled with 4K and curved screens and assume that you must spend hundreds to get a decent panel, but ViewSonic’s VX2457-MHD banishes that notion with an entertainment-friendly brief and a tempting S$269 price.

That gets you a 24-inch 1080p monitor that comes with AMD FreeSync. While the VX2457 is designated as a gaming monitor, that’s not to say it cannot be used for all sorts of entertainment too – which it can. So then, is this screen really the bargain it appears to be?

If Looks could Kill

ViewSonic has picked a TN panel for this monitor. The prime reason for this is TN technology’s relative low cost, but there are also technical advantages to making this choice. You see, for serious gamers, a quick response time is critical, and TN screens allow for rapid response times (1ms for this monitor) cheaply. And equivalent IPS panel would cost much more. But that said, TN screens also have their pitfalls – namely, comparatively poorer viewing angles and colour reproduction.

The ViewSonic’s main extra feature is AMD FreeSync. This gaming technology matches the monitor’s refresh rate to the host GPU’s frame rate, eliminating tearing and juddering, and making games look far smoother as a result. You will need a compatible AMD graphics card to make use of this too. The monitor also has a reasonable list of features elsewhere, but these inclusions sometimes aren’t up to snuff. The inclusion of 2W speakers is one such example. I’m pleased to see speakers included, but they serve up underwhelming bass and a tinny high-end that begins to distort when the volume is turned up. They’re insipid and I don’t recommend using them for games, movies or music. Would it have made more sense for ViewSonic to remove this feature, and sell the monitor at an even lower price point? That could have been even more attractive.

I’m also not a fan of the ViewSonic’s looks. It’s just a personal opinion and there’s nothing inherently wrong with the VX2457-MHD’s design, but the big bezel and use of glossy plastic – rather than the smarter matte use by other brands – can give way to fingerprint smudges, and the occasional hairline scratches from wipes.

Putting this monitor together out of the box is easy, since the stand comes attached to the rear of the screen – I only had to slide the base into position and secure it with a single preinstalled screw.

The simple setup doesn’t make for good build quality, though. The base feels thin and there’s too much give in the screen itself as well as the cover around the back. Even the slightest nudge sends the screen wobbling.

The ViewSonic isn’t particularly flexible in terms of positioning, either – the panel only tilts forward and backwards although it also supports 100mm VESA mounts for mounting to movable arms. But let’s also remember that this is a sub-$300 monitor too. Some things got to give.

The onscreen display isn’t particularly easy to use. The buttons are around the back of the screen and correspond to small symbols on the front of the bezel, but it’s tricky to line up the two unless you’re sitting right in front of the screen. And even then, it takes a little time to get used to.

The VX2457 made a reasonable start in benchmarks. Its contrast level of 1,361:1 is great – only behind a handful of other screens. That result was generated with a reasonable black level of 0.21 nits, which means that darker shades will have plenty of depth and variation.

The VX2457-MHD has decent colour temperature and accuracy, too. Its temperature measurement of 6,679K is closer to the 6,500K ideal, which means its colours will appear well-balanced, not too warm or cold.

A factory brightness level of 286 nits is eye-searingly high, so I retested the screen with the panel reduced to 150 nits – that’s 45/100 on the screen’s OSD. With that more comfortable level chosen, the black level displayed by the VX2457-MHD improved to 0.12 nits and the average Delta E hit 1.84. Both are decent results and both will help games, movies and web pages look better.

Overall, this monitor’s TN panel doesn’t fall behind in any one area: contrast is decent, black levels are good, and colour accuracy and temperature levels are reasonable. It will happily cope with work, web browsing and games, although those who undertake colour-sensitive tasks may want to look for a pricier panel.

The ViewSonic’s various screen options are divided into gaming and non-gaming menus, with the gaming options further split into genre modes. Many of the gaming modes use technology to try to make the screen sharper, and it’s never helpful: it makes edges look jagged and too pixelated. Games will look poorer with this option activated.

Few of the game modes even served to improve screen quality. The default option only made the average Delta E and gamma measurements decline, and the FPS mode dialed back on the overly pixelated edges but made no improvements to benchmark results.

RTS mode ramps up the pixelation and makes the screen darker and more pallid thanks to a murky brightness measurement of 120 nits, and the MOBA mode doesn’t bring anything new to the table – it’s barely any different from the ViewSonic’s factory settings.

There isn’t much to like about the ViewSonic’s more practical modes. The sRGB option drops the brightness to a dark 121 nits – a result that undermines its revised 1.77 Delta E – and the Movie mode sends the average Delta E and gamma measurements way off-piste.

The final screen option, Eco mode, aims to cut power consumption. With this option the ViewSonic consumes only 10W from the mains – but even at factory settings it required only 17W. This is a very frugal screen as it is.

Performance & Lag
This is where the ViewSonic encounters a significant issue. The VX2457-MHD’s backlight lost about 20% of its potency down the entire left-hand side of the screen, with around 10% of the backlight diminishing in the middle of the panel and between 6% and 8% on the right-hand edge.

That left-hand edge is a problem. It’s a big enough difference to be noticeable during darker moments in games and movies, and it’s enough to put me off doing any colour-sensitive work on this screen. It’s not a good result, and the panel was further hindered by slight backlight bleed along both horizontal edges of the screen. It’s also far worse than most rivals.

The ViewSonic’s colour uniformity was better, with only a few percentage points of variation across the screen. Colours were a little warmer on the left and a little cooler on the right – which I expected, given that’s where the backlight becomes brighter – but not enough to be distracting.

The monitor gained some ground in the input lag test, which is no surprise given the VX2457-MHD’s speedy TN panel. It averaged an result of 11.5ms, which is easily good enough for all kinds of games.

My Opinion
ViewSonic’s latest screen is a mixed bag – but, given its low price, this isn’t exactly surprising.

It served up a solid set of benchmark results, with reasonable contrast and colour accuracy. But, not surprisingly, it falls down in several departments. Its speakers are disappointing, the screen modes offer little extra, and the ViewSonic isn’t exactly versatile. Its build quality and uniformity results also failed to impress. The monitor isn’t expensive, but it needn’t have to feel cheap either.

So the ViewSonic VX2457-MHD’s budget status is obvious in several key areas. Its core benchmark results might be reasonable and AMD FreeSync is a game-friendly addition, but its various compromises make it hard to give it a whole-hearted buy recommendation for enthusiast gamers. But I do see it being an ideal if you are looking for a budget 24-inch, either for play/practice eSports games. In particular, the VX2457 seems to have a place in the hearts of many FGC (Fighting Games Community) players – notably “RZR|Infiltration”, a prominent Street Fighter competitive player, has praised the monitor’s response time as key for his match practices.