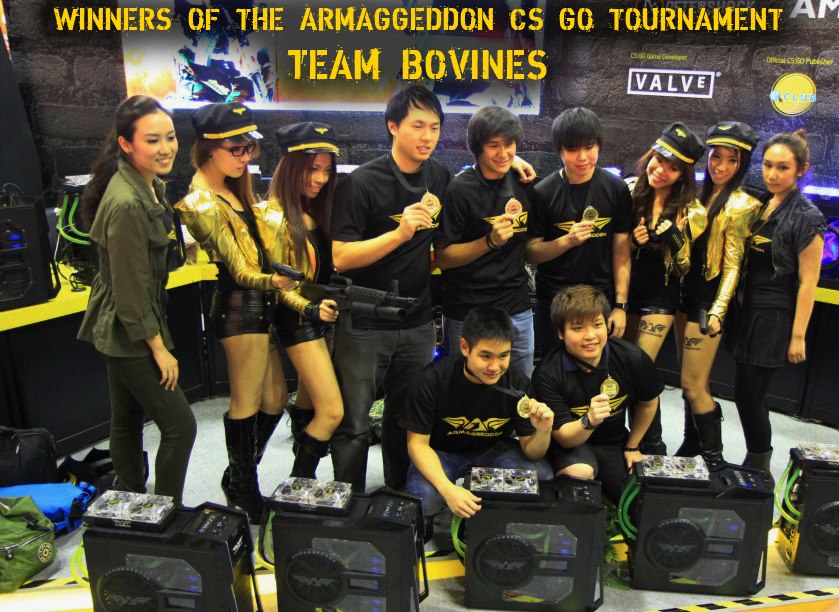 The five-man team, comprised of Goh Yong Liang, 22, Alexandre Sallé, 23, Benjamin Kou, 20, Theodore Tan, 19, and Leslie Chin, 20. Each walked away with an Armaggeddon gaming PC worth S$2,500, along with S$1,000 in cash, gaming peripherals, and the exact models of the Armaggeddon mouse mats they got to use during the tournament.

“We’re very happy (we won) because we actually put in a lot of effort, especially Alex and I because we are still schooling,” said Yong Liang, who is studying Electrical Engineering in the National University of Singapore.

The team was formed about a year and a half years ago, after Yong Liang concluded his National Service stint. He introduced long-time friend Benjamin to Alexandre, and they decided to play together for good following several competitions.

When asked about the tournament, Yong Liang said he thought it was very well organised.

“Apart from the first day where there were a lot of time delays and other issues, I think Armaggeddon has handled it very well. Overall, they’ve done a very good job,” he said.

This is the first large-scale CounterStrike: Global Offensive tournament conducted in Singapore since the game’s launch a couple of weeks ago. A total of 27 teams participated in the qualifiers, which were held across two weekends at Aftershock PC outlet in Serangoon Road. Five teams re-registered for the second round of games, bringing the total number of participating teams to 32.

The impressive number of teams signals one thing: the CounterStrike community is certainly seeing a revival here.

“This game reignited my passion for CounterStrike again,” said Yong Liang. We’re sure many FPS gamers – such as the Armaggeddon tournament’s qualifying team 7 Old Legends – feel the same.