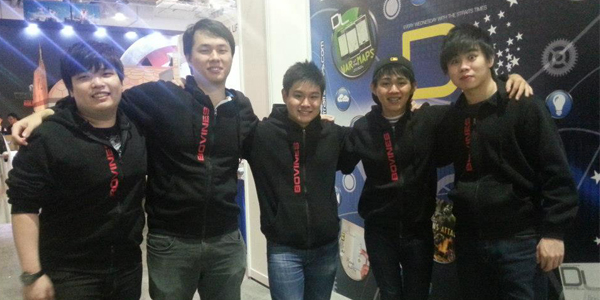 Amateur eSports team Bovines have made quite a name for themselves in the local Counter-Strike community. Winning several tournaments across the game’s three iterations — CS: Source, CS: Online and CS: Global Offensive — it isn’t hard to imagine them as Singapore’s best. Seems like others think so too, as the team recently announced their acquisition by flux Gaming.

Sponsorship and the road ahead

flux Gaming is a new eSports organisation set up by Azom, a self-funded PC company that can be thought of as India’s budding Alienware equivalent. Currently there’s only an Indian League of Legends team and our former Bovines, but the sponsor is providing everything a professional eSports team would expect.

“At this juncture, we are not receiving a salary as we have made it clear that our players’ first priority is their education and obligations to [National Service],” explains team manager Christoper “Churai” Tang. They’ll get the usual peripherals and jerseys but, more importantly, will have funds to either attend or host international tournaments.

The team is now preparing for the NUS Cybergames Competition and the Asian Cyber Games, both taking place in June. After that they’ll be looking at competing in some Indian tournaments to build a fan base in their main sponsor’s home country.

“I think the most important thing for us right now is short term goals leading up to big ones,” says Christopher. “Our first hurdle would be to dominate the Asian CS:GO scene. This won’t be an easy task as [it means] competing against former world champions TyLoo from China and Lunatic-hai from South Korea. However, as you know, this is a new game and I’m confident in my boys.”

We’ve seen a strong growth in eSports lately thanks to the efforts of organisers and sponsors. Our MOBA teams and FGC players have competed internationally while StarCraft II is enjoying a resurgent interest. When it comes to FPS, though, we’re a little divided.

Competitive shooters these days include the likes of Battlefield 3, Call of Duty: Black Ops II and Halo 4. Step into any LAN cybercafé and chances are you’ll see Blackshot plastered on a few screens. Fact is that Counter-Strike has seen better days, despite being an officially supported game at major eSports events.

Christopher notes that Singaporeans have lots of talent but is sad to see it go wasted. He hopes that his team’s performance will develop to, or even exceed, the levels of legendary Team TitaNs and Singapore Swords. With any luck, being on the international stage will help draw the local FPS scene back to Counter-Strike.

He ends with this: “Singapore is a small country and we can’t view eSports the same way as China, South Korea or Sweden does. Every top-level community from every game needs to support each other. Hopefully, down the road flux Gaming will be able to do something about this.”

Ade thinks there's nothing quite like a good game and a snug headcrab. He grew up with HIDEO KOJIMA's Metal Gear Solid, lives for RPGs, and is waiting for light guns to make their comeback.
Previous post Meet Dusty Revenge
Next post Celebrate 2K Games Day with St. Games Cafe