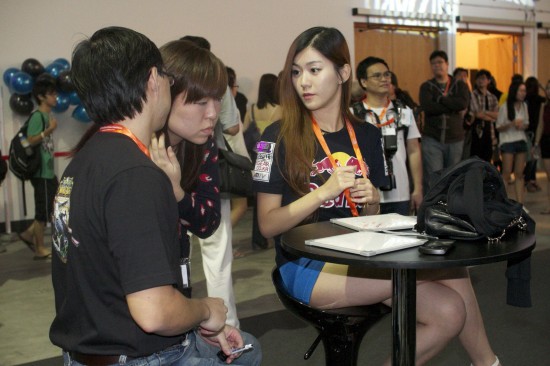 Korean team StarTale’s Aphrodite was recently in town, and we got the chance to speak to her about pro-gaming and gamer girls. Find out what she had to say.

RGB: When you were a little girl, what did you dream of growing up and becoming?

Aphrodite: I wanted to be an air stewardess when I was younger. It’s totally different now though.

RGB: How did you get started as a pro gamer?

Aphrodite: I started with one-on-one play, but as I progressed I got a chance to play on stream, and I got a lot of fans from there. That’s when I entered the StarCraft II gaming community.

RGB: How have you been performing? We saw that you recently won the Zowie Divinia competition against your teammate, MisS.

Aphrodite: I actually haven’t had that many chances to practice against MisS because she plays on the China server. We don’t meet online. But there are differences. The guys are better at multitasking and have better reflexes and responses. That’s one of the biggest differences.

RGB: Do you think girls have a natural disadvantage against guys when it comes to e-Sports?

Aphrodite: Yes. Even if we were to practice for the same amount of time, there are physical constraints on girls. Guys can practice in team houses, and girls can’t because that’s not a very female-friendly environment. That’s the biggest difference.

RGB: So do you think you’re ever going to be able to play as well as a male player?

Aphrodite: I feel it’s more difficult to match up against male Korean players because they are really good. But on a global stage, I might be able to compete against international male players.

RGB: Are there any female players you’ve found interesting or challenging to play against?

Aphrodite: I feel there still aren’t enough female players and this is an area that needs developing. It’ll be good if more female players could step up.

RGB: Do you then think that all-female tournaments are important?

Aphrodite: There are not a lot of female-only tournaments but I feel it’s important that they do exist.

RGB: Are there any female players that you’d like to meet again in competition?

RGB: Where do you think you rank now against other pro-gamers, both male and female?

Aphrodite: I still have shortcomings compared to male players but judging on my previous performances apart from those where I’ve had to face Scarlett, I’ve been able to do really well. I think I’m not too bad.

Aphrodite: I know how to get the best results in every situation and I have a really good understanding of the game itself. But on the flipside, my multitasking still has some way to go.

RGB: What is the next career step for you?

Aphrodite:  Firstly, I’m going to join all the female-only competitions coming up. I’m also going to work really hard so I can compete on equal footing with other players.

RGB: Do you live in the StarTale team house? What is a typical day of training with StarTale like?

Aphrodite: I don’t live in the team house, and I don’t train with StarTale. I train alone.

RGB: What do you like doing apart from playing StarCraft II?

Aphrodite: I don’t have a lot of interests outside of gaming but I like to swim.

RGB: Were you playing StarCraft II before or after you met Rainbow?

RGB: So how would you say Rainbow has affected your performance as a pro-gamer?

Aphrodite: If not for Rainbow, I wouldn’t be the pro-gamer that I am today.

RGB: If you and Rainbow have a kid, are you going to teach him or her to play StarCraft II?

Aphrodite: I’ll have to think about it. It’s a situation that’s really far from me right now.

RGB: What advice would you give girls who want to be pro-gamers?

Aphrodite: It’s important to play the game a lot, but it’s even more important to have a good understanding of the game. By increasing your game knowledge, your skills will improve as well.