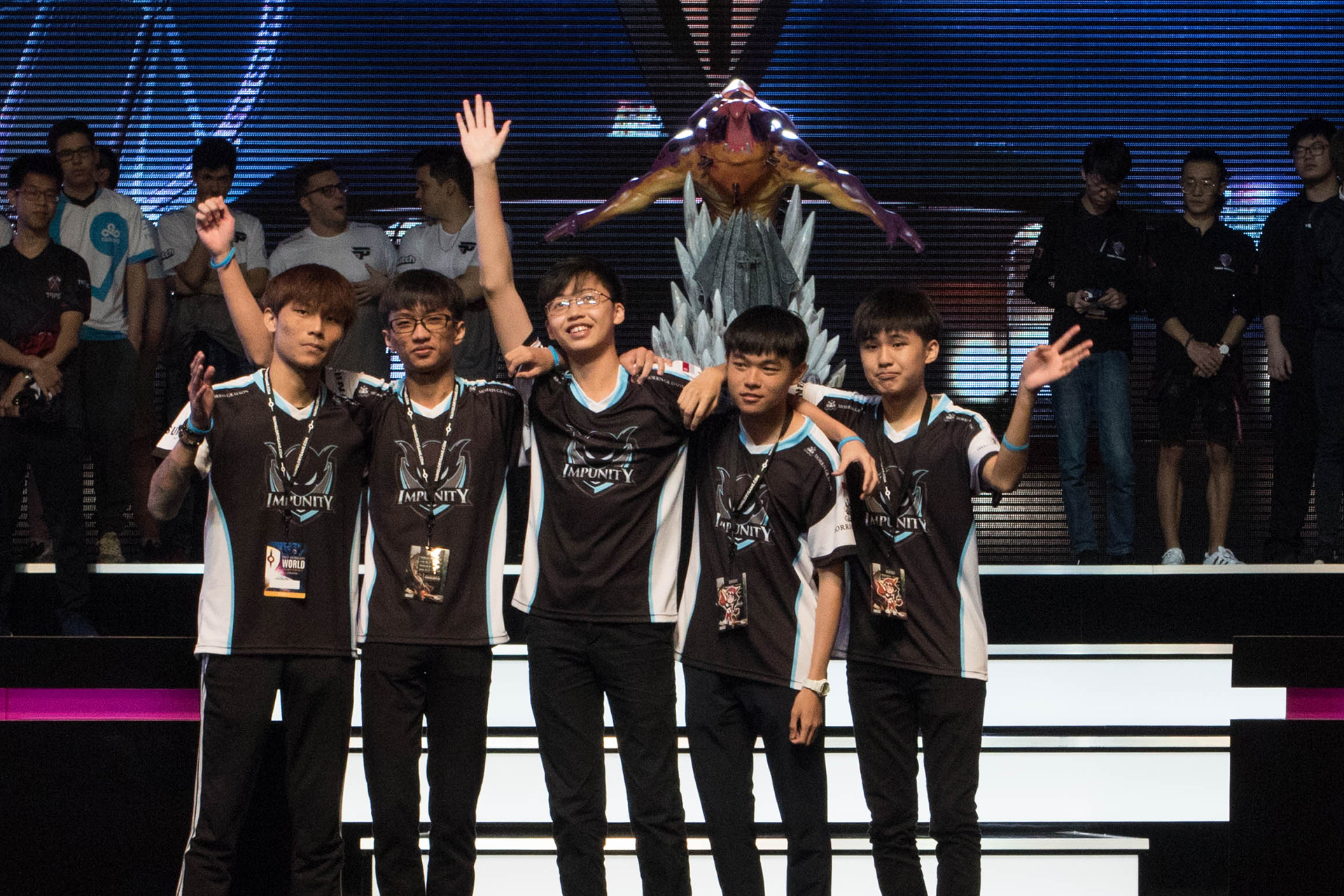 Singapore’s Team Impunity has earned a fourth-place finish at the Vainglory World Championship 2017, putting on a valiant and highly entertaining performance against some of the top teams from around the globe.

From 14-17 December, fans online and on-site at the Kallang Theatre witnessed Team Impunity’s classic rise as the homeground underdog. Their astounding performance saw a swell in support from the predominantly teenage local crowd, whose cheers, chants, and thunderstick-assisted applause deafened the 1,744-seater auditorium.

It’s no surprise why. During the Day 1 group stages, Team Impunity successfully held their ground against former world champion ROX Armada (South Korea) and high-fliers Tribe (North America), drawing both games and securing a slot at the Day 2 quarterfinals. There, they proved that their performances were anything but a fluke, winning 3–1 against Team Kraken (China) and blowing through to the semi-finals, igniting hopes for a Top 3 finish.

South Korea’s ACE Gaming proved to be their match in Day 3, extinguishing hopes for a grand finals showdown. Nonetheless, Team Impunity didn’t go down without a fight, in what is likely to be a series that will go down in Vainglory history.

The first match of that best-of-five easily went to ACE Gaming, whose immaculate understanding of Vainglory‘s map and timings saw the complete dismantling of Team Impunity. Things were set to repeat itself in match two, before the latter demonstrated just why they’re the representatives for Southeast Asia.

With daring and near-suicidal aggression, Team Impunity lashed out at their opponents with a series of crowd-pleasing brawls, exhibiting world-class counters and reactions as they shut down ACE Gaming’s attempts at progress. However, the match wasn’t about to end in a tie — in a stunning last-minute upset, the Koreans utilized their better map awareness to sneak around the back and strike directly at their opponent’s Vain Crystal, raising the score 2–0.

By the third match, Team Impunity had refined their approach. Capitalizing on their strengths, they went with a proven hero composition — Fortress, Catherine, and Vox — placing all of their offensive capabilities in the hands of Nicholas “QuiCi” Wong. Backed up by teammates Tan “deftQ” Jing Yu and fan-favorite Amos “Quatervois” Ker, it was a decision that paid off handsomely as the Singaporeans made their well-deserved comeback. 2–1.

That momentum carried through to match four, where we got to see Team Impunity striking an early lead for the first time in the series. For all intents and purposes, it seemed that we would have yet another strong showcase from Team Impunity, and a high-stakes battle in the form of match five. Under the mounting pressure, cracks began to surface; a late-game fumble saw ACE Gaming taking the Kraken for an unexpected push, sending the local players into disarray.

Not yet — putting on a spectacular, nail-biting defense, their Vain Crystal utterly defenseless and teetering on the edge, Team Impunity rallied for a counter-push. This was supposed to be the encounter that would bring victory, if not putting them that much closer to it. As everyone watched, with hearts in their mouths, the South Koreans did it again. A second backdoor invasion, YoungJoo “YoungJoo” Jang phasing his Lyra phase base defenses and landing the decisive blow.

Day 4 against North America’s Cloud9 didn’t fare so well for the Singaporean team, losing the entire set in a 3–0 outcome. Perhaps the shock of defeat still weighed heavily on their hearts and minds, or fatigue had finally reared its head.

Either way, fourth place is nothing to balk at. When it came down to it, Team Impunity showed they had the skill and talent, putting them on equal footing against the world’s best teams. They’re set to take home a chunk of that US$140,000 prize pool (approximately S$188,824) as well as a lifelong memory, but more importantly, they’ve gained even more valuable experience.

After all, things are just getting started now that Vainglory is transitioning to the 5v5 standard instead of 3v3. Mobile is an entirely feasible new platform for esports, and helping to prove its competitive merits both internationally and at home are the early professionals such as Team Impunity. You’ll definitely want to keep tabs on them in 2018 and beyond.

Ade thinks there's nothing quite like a good game and a snug headcrab. He grew up with HIDEO KOJIMA's Metal Gear Solid, lives for RPGs, and is waiting for light guns to make their comeback.
Previous post Star Wars Battlefront II now updated with The Last Jedi content
Next post Vainglory unveils its long-awaited 5v5 mode