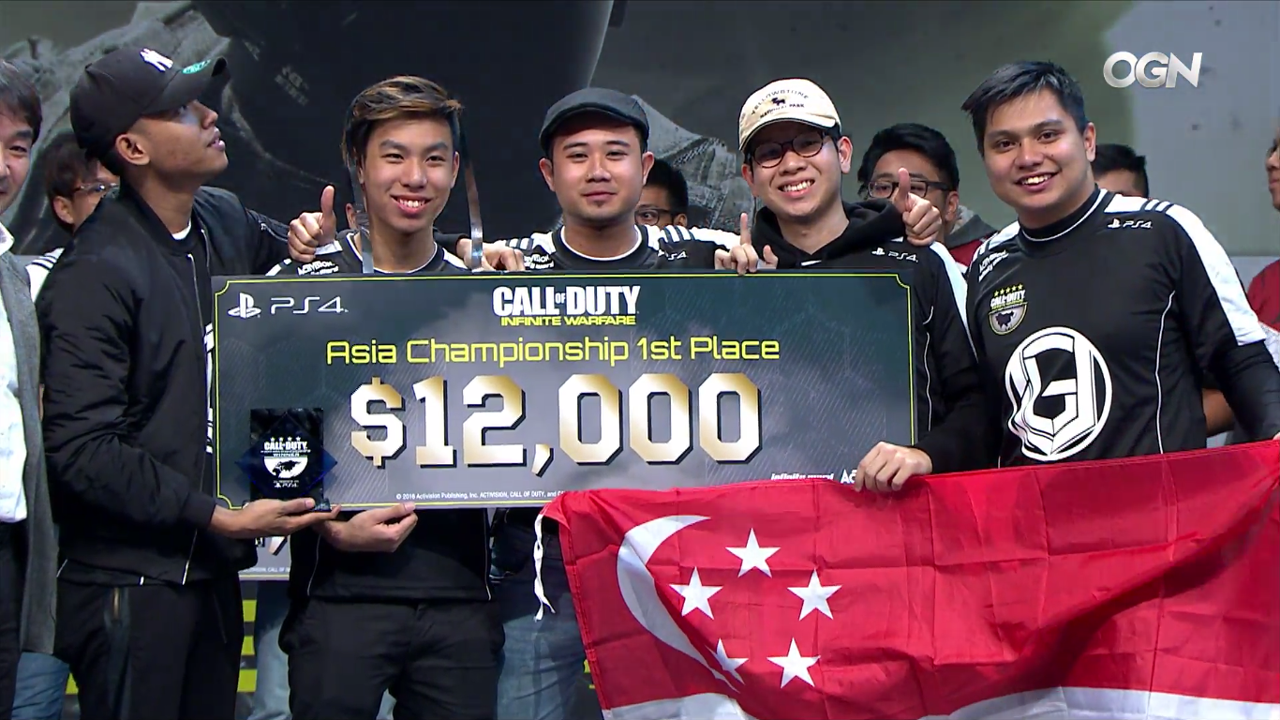 UnVeiL NoVa (UNV) are the proud winners of the Call of Duty Infinite Warfare Asia Championship. The four-man Singapore team defeated RamPaGe Gaming (RG) in a clean 3–0 sweep in the grand finals, earning themselves a cool US$12,000 (S$17,000) in prize money.

The Asia Championship is a partnership between eSports giant ESL and Call of Duty partner PlayStation. It featured six teams from this half of the globe: Singapore, Malaysia, Hong Kong, Taiwan, and South Korea (the Philippines was replaced by a second Singaporean team), all of whom had made the cut after winning their respective regional qualifiers.  They gathered in Seoul, Korea, for the finals on Jan. 22, 2017.

Players in the winning UnVeiL NoVa lineup were:

This is the second Asia Championship win for 18-year-old Mysticreal. He won last year’s US$11,000 top prize under Team NoVa, before their merger with UnVeiL in late-2016. His weapon of choice in the tournament? The OSA assault rifle.

Game 1 (Hardpoint on Breakout) saw RG in a strong lead for the first minute before their fortunes took a downward turn. UNV’s Mysticreal went on a six-kill streak by the graveyard to secure the third hardpoint, paving the way for his team’s comeback. Despite RG’s attempts they were unable to retake the lead, with UNV displaying some fine shooting skills to end the opening game in a 250–151 score.

Game 2 (Search and Destroy on Crusher) saw UNV starting on the attacking side, only to have Mysticreal offered up as first blood by RG’s Bloo. Yet that victory was short-lived as surviving UNV players Xenon and SolidRain went on to clear the rest of RG to pick up the first round. RG’s Skywhite managed to plant the bomb in the next round but it simply wasn’t enough, as Xenon charged forward with even more kills for the eventual 2–0 score.

Game 3 (Uplink on Frost) had UNV securing a quick two points early on, making it seem as if the tournament was more or less over. Skywhite brought RG back into the game midway through, spurring the team into wiping out UNV for an easy two-point dunk. However, UNV repaid the favor by doing the same in an undefended RG base, taking advantage of the opportunity to score another two dunks for a huge lead. Halftime kicked off with a score of 9–5 and a fierce shootout between the two teams. UNV’s Syns ultimately made the first point, setting the tone for the rest of the round. The game ended with a final score of 11–5, just as RG were beginning to cave under the immense pressure.

Unfortunately, not all of UNV’s matches are available for viewing due to stream issues. You can, however, watch the deciding three on Twitch from this timestamp on.

Ade thinks there's nothing quite like a good game and a snug headcrab. He grew up with HIDEO KOJIMA's Metal Gear Solid, lives for RPGs, and is waiting for light guns to make their comeback.
Previous post Ariana Grande now in Final Fantasy Brave Exvius until Feb. 2
Next post What you’ll get to do in this week’s For Honor beta