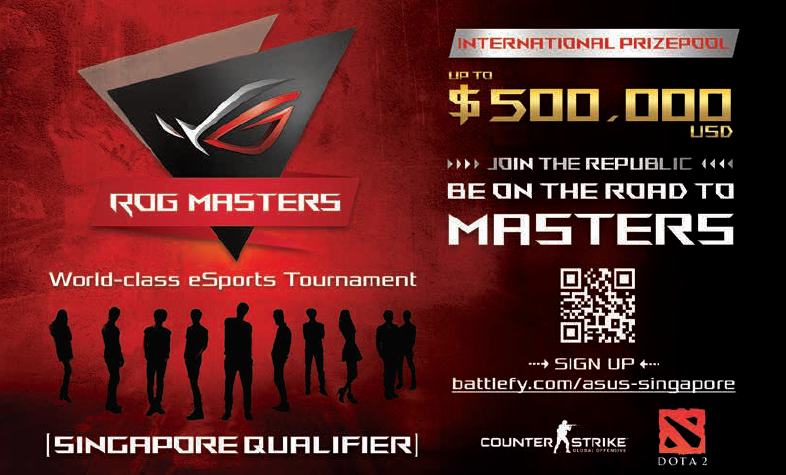 ASUS Republic of Gamers (ROG) has officially kick off its preparation for the ROG Masters 2017 tournament with the Singapore Qualifiers as part of its road to masters campaign.

In the press release sent by ASUS, we were told that an expected total of 64 teams from Singapore alone will be battling it out at both DoTA 2 and Counter-Strike: Global Offensive (CS:GO) for the top 2 spots to represent Singapore at the Regional, and possibly global Grand Finals. The winning team from each game will also walk away with S$5,000 at the end of the Singapore Qualifiers.

If you and your team are up for it, registration for the Singapore Qualifiers has commenced for both Dota 2 and CS:GO. Interested teams from Singapore can proceed to the ROG Masters official tournament sign up page to sign up before registration closes on 13 August, 2359hrs.

The ROG Masters 2017 eSports tournament will feature over 20 top professional teams globally, and offer a grand prize pool of up to US$500,000. Since May this year, teams from around the world have been battling it out in a series of 30 country qualifiers and four regional qualifiers (EMEA, America, APAC, and China). The winners of these open qualifiers will then come together and fight for a place in the Grand Finals in November, 2017.

Aaron Yip is an industry veteran with more than 15 years of experience. When not spending time on his gaming PC and consoles, he can be found in Hyrule solving ungodly puzzles and collecting gems.
Previous post PSX SEA – PlayStation Asia’s next big leap for the region
Next post Review – Sound bar or Home theater? LG’s SJ7 Sound Bar Flex gives you both