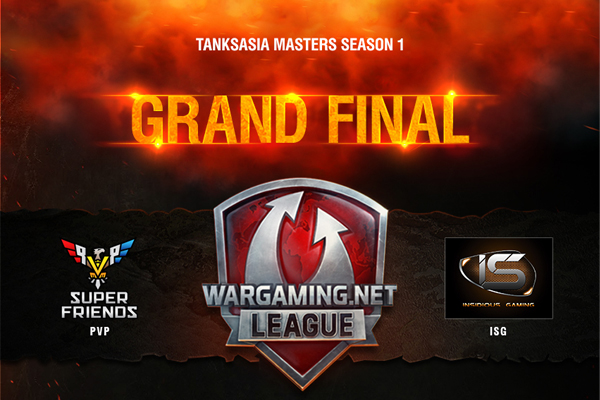 “How’d he get up there?” blurts out one spectator.

Tucked away in a quiet spot near Plaza Singapura is the Command Centre cybercafé, where the grand finals in Wargaming’s TanksAsia Masters Season 1 were playing out. Everyone’s eyes were glued to the projection screen, showing a T32 heavy tank precariously crawling along a sloped edge.

It was a timely reminder that both teams were professionals, just as the pace of the tournament was grounding to a crawl. PVP (Philippine Vanguards of Peace) Super Friends were leading 2:1 in the showdown with local team ISG (Insidious Gaming), and after a draw on Set 4’s map, Abbey, the players grew increasingly conservative, prompting rematches on the same three-lane map. It’s hard to fault them for it – a US$60,000 top prize was on the line, after all. As the languid atmosphere of the audience followed the events on-screen, the tension in the player booths slowly continued to rise.

The slog of Set 4 eventually ended in PVP’s favour, but it was Set 5’s Widepark that set the stage for victory.  ISG’s aggressive, two-pronged push quickly crumbled after losing two 110 heavy tanks at the underpass. With one side broken, the other half was soon cleaned up by PVP, celebrating even before the final shot rang out. The team’s cheers were met by the rousing applause of their supporters outside, many of whom had come early to get front-row seats. Even Spencer “ISG_Deathskyz” Wan, team captain of ISG, was quick to congratulate his opponents by visiting their booth.

Once the celebrations, speeches and prize-giving were over, I caught up with panda-donning Deathskyz for his thoughts on the tournament’s end.

“Just relief – utter and sheer relief,” the young player remarked, taking a moment to compose himself. “The stress build-up when you’re playing the game really gets intense, and we [made] mistakes every now and then which actually cost us the game, but after all this… it’s just immense relief. Congrats to PVP, they’re a very good team to fight with.”

He later shared that PVP went into the tournament better prepared than his team was. Not only did ISG have less training sessions, their matches were also livestreamed more often during the Masters series, offering opponents like PVP a chance to study their tactics. “We pretty much did what they wanted us to do. It was a valiant effort from my team [and] at least we didn’t go down 4:0 – we put up a fight.”

This is just the start for ISG, of course. They’re actively recruiting in hopes to find a second or third dedicated team, are already training new field commanders and plan to work more on their team coordination. There’s little doubt that we’ll see ISG again in the final stretch of Season 2, one that’s better trained and better motivated now that they’ve nearly tasted victory.

“We want to fight PVP again.”

Over by the stage, cameras from media all over the region were still rolling on PVP. While most of the celebratory energy has ebbed away, wide grins still plastered their faces, even when I crept up to team captain “Batman” (we don’t reveal superhero identities) once the lights died down. With the cowl still on, it provided quite the comical contrast to the man’s friendly disposition; turns out that was its intended purpose after all.

Attributing his team’s jovial attitude during the tournament to the Filipino love of expressing their feelings, he goes on to explain that the mask and his team’s on-camera antics are all in the hopes of promoting the game. “I think World of Tanks needs a big promotion and I think my team delivered on that.”

Unsurprisingly, Set 4’s Abbey proved to be PVP’s toughest challenge that night. “That was really intense. I went down to a hundred hit points there and we were just hiding behind that house. We were like, ’Oh come on, time, just go down. We want to win, we don’t want to replay.’ Its good my team killed those two tier eights – we were so happy.”

With no plans at the moment (“we want to rest and enjoy our $60,000”) other than conferring with the clan’s main commander, it looks like PVP will be celebrating for quite a while. When Season 2 comes round, however, Batman will be there with his Super Friends.

Will we see more super-powered teammates next time? “I hope so!” We certainly hope so too.

Congratulations to PVP Super Friends for their 4:1 victory and US$60,000 prize! As runners-up, ISG takes home US$20,000. Here’s the official minisite with the full team roster, while the full video can be viewed on the wargamingasia Twitch channel (begins sometime after 18:20).

Ade thinks there's nothing quite like a good game and a snug headcrab. He grew up with HIDEO KOJIMA's Metal Gear Solid, lives for RPGs, and is waiting for light guns to make their comeback.
Previous post Local Pre-Order Details For Beyond: Two Souls
Next post New PlayStation Vita Detailed, Releases in Oct for Japan