Player Center, Tournaments and More Coming To Heroes of the Storm SEA 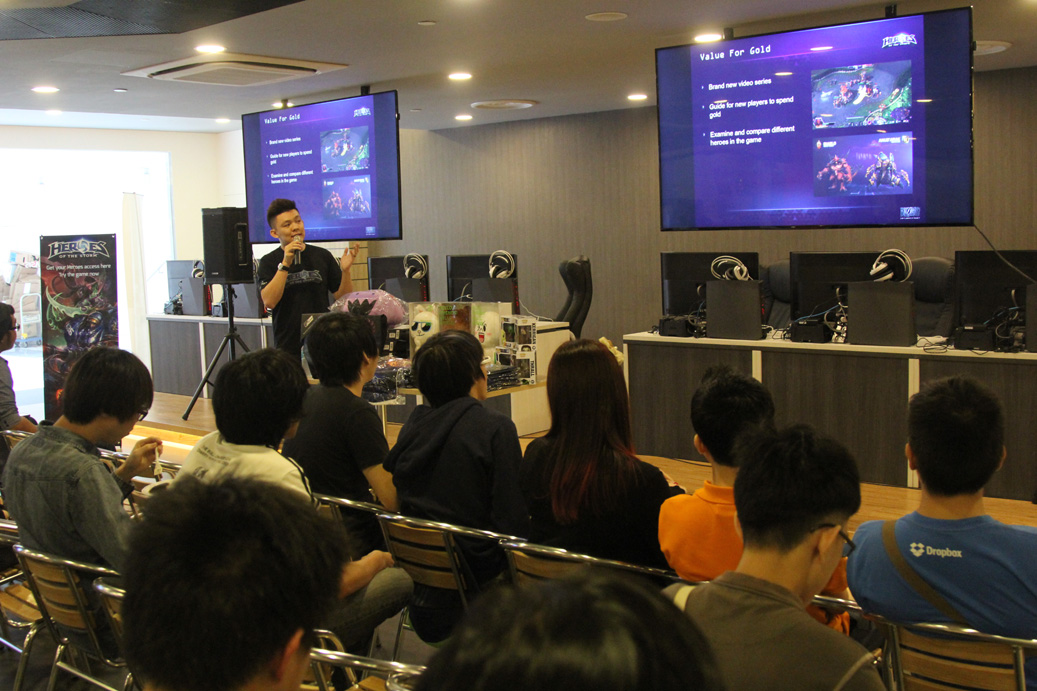 Local Heroes of the Storm fans were treated to a special community event by Asiasoft last Saturday. Held at the cosy OASIS Cafe, the Heroes Gathering saw attendees drafted into random teams for a friendly tournament. It was a great moment for newcomers to bond with the outspoken regulars, yet the event also served as an opportunity for us to hear about Asiasoft’s big plans for the future.

Heroes of the Storm is now in closed beta and they want as many people as possible playing it. One of the perks Southeast Asia has compared to the rest of the world is Asiasoft’s Beta Key Redemption App. If you don’t have access to the game, simply refer to this page and you’ll be on your way to a stomping good time.

For what it’s worth, I had trouble accessing the app via Firefox but Chrome works just fine.

With what basically amounts to free beta keys in hand, Asiasoft will be embarking on a Cybercafe Tour across six Saturdays.

What does a competitive game ultimately need? Why, tournaments of course. While not a lot was revealed regarding the format or prizes, we do know when these one-off showcase tournaments will be held.

The earliest will be on 21 March 2015, just five weeks from now, at the very same Oasis Cafe as part of the CyberCafe Tour. There’s still time to go form a team and start practicing!

The second is an online tournament scheduled for 11 April 2015. The third and largest will be sometime in May, although things aren’t confirmed yet. To keep up-to-date with the latest information, stick around on BlizzHeroesSEA and BlizzHeroesSG.

Separate from those is the seemingly bigger Heroes Championship – Singapore, coming “sooner than you think.” All we know is that it’ll have prizes “way above the level” of their previous tournaments.

Here’s where things get exciting. The Player Center is a two-phase initiative to get players better involved with the game and community.

The first phase is “like a help center for teams.”  Being a team-centric game, forming a group of five isn’t easy when you’re always flying solo. With that in mind, the Player Center will be a one-stop hub for recruitment purposes, where players fill up a standardized form indicating their country, in-game level, commitment level, and competitive history to find like-minded teammates.

Phase two is essentially a stepping stone for the more competitive players and teams. Gatherings will be conducted every so often for two purposes: recruitments and courting potential sponsors.

For now, local players can type “/join SG” in the Heroes of the Storm client to enter the community channel. Here they can form teams, share knowledge, or just bicker about network issues to their heart’s content. The best part about it is that the client will automatically join the channel in the future.

The SEA Showcase livestreams professional scrim matches between teams from Singapore, Malaysia, Philippines, and Thailand. Commentary will accompany these matches, providing insights to current competitive meta. It’s essentially a great resource to learn what the pros (or your competitors!) are up to, and you can catch them live on Twitch or as VODs (video-on-demand) on YouTube.

On the other hand, Value for Gold is a local weekly series that aims to cover all the Heroes individually, serving as a guide for new players on how best to spend their hard-earned gold. It examines the strengths and weaknesses of each, compares them against similar options and provides a value rating at the end – all subject to debate, of course!

They admitted to having a low budget microphone so hopefully the next one turns out better.

It’s amazing how much is in store for a game’s that not even officially launched. Be sure to check out the new Battlegrounds if you haven’t played since alpha!

[Disclosure: Door gifts were provided by the event’s sponsor, LINE.]

Ade thinks there's nothing quite like a good game and a snug headcrab. He grew up with HIDEO KOJIMA's Metal Gear Solid, lives for RPGs, and is waiting for light guns to make their comeback.
Previous post ASUS Swift ROG PG278Q G-Sync Experience
Next post Deus Ex Universe's Hair Will Be Shown Off At GDC 2015