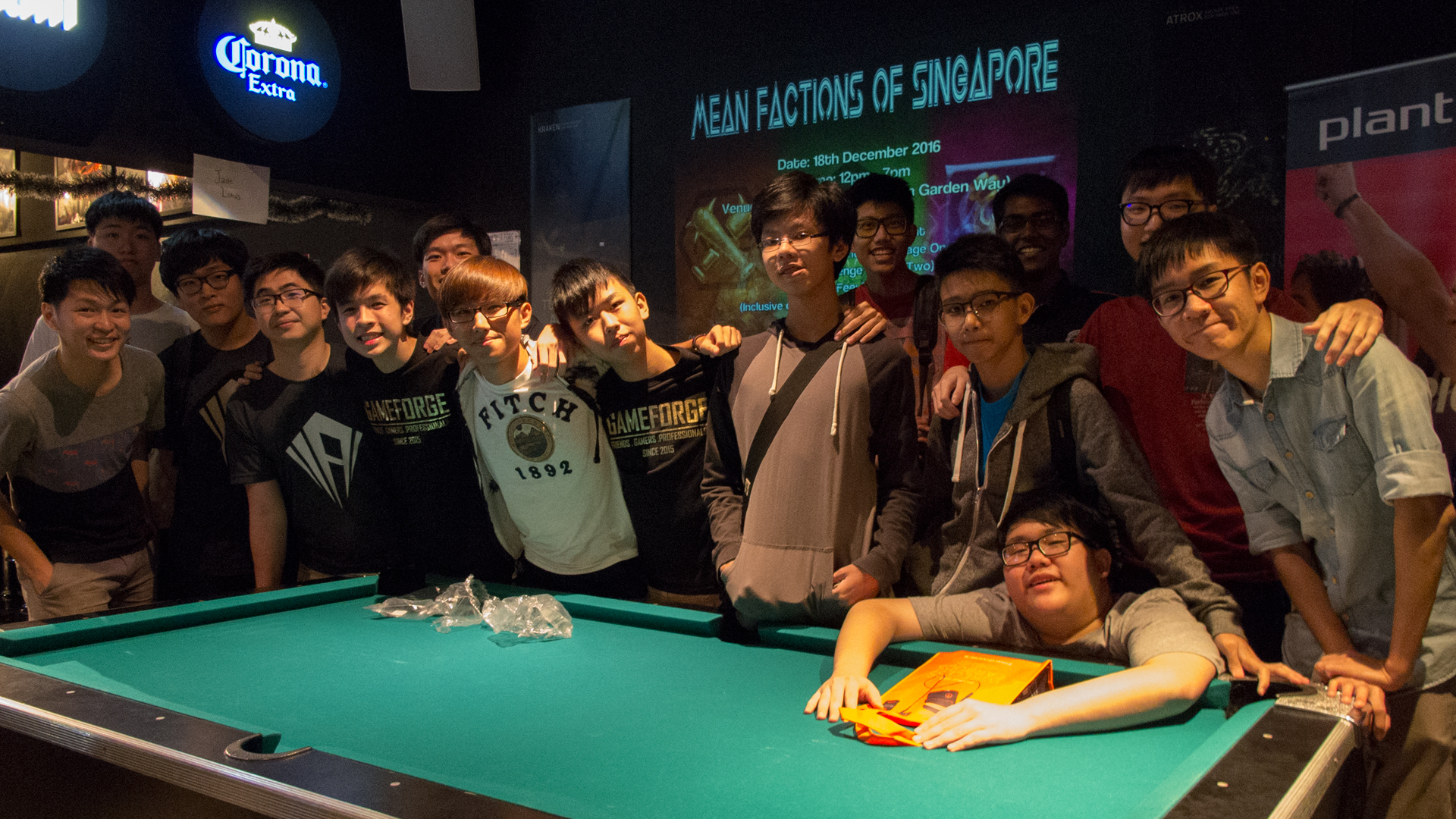 The din of a predominantly teenage crowd belies the venue they are in: an unassuming, dimly-lit bar hidden amongst fellow shophouses. Far from being illegal, here the lone bartender serves Sprites in place of spirits, while televisions display sports of a digital persuasion. Welcome to Mean Factions of Singapore, the first Fireside Gathering since Hearthstone’s latest expansion; and like Gadgetzan, the crowd can be unflinchingly ruthless.

Organized by Team Abyssus and eSports bar Brewlings, Mean Factions of Singapore had participants fighting in a three-way brawl under the banners of Jade Lotus, Grimy Goons, and the Kabal – crime families in the Mean Streets of Gadgetzan expansion.

Each side was helmed by a local team: Abyssus with Jade Lotus, ManaSurge with Grimy Goons, and GameForge with the Kabal. The first order of business was an internal Best-of-5 to determine a faction’s top three players, who then faced their rivals in a last-faction-standing showdown.

“When the new expansion released we saw an opportunity,” explained Goh Yuan Tat, better known as ‘Silfer’, the founder of Team Abyssus.

“Using Brewlings as our usual venue, we approached ManaSurge and GameForge and came up with this new idea of each team supporting one faction. It’ll create hype among the players; they can choose who they want to represent and then bring glory to that faction.”

There were no cash prizes or league points on the line, only a well-lit pool table decorated with gear sponsored by Plantronics Gaming South East Asia, Blizzard SEA, and GameForge. Nonetheless, over fifty people showed up that Sunday afternoon – more than any of Abyssus’ past events – in what eventually turned out to be a nine-hour affair. 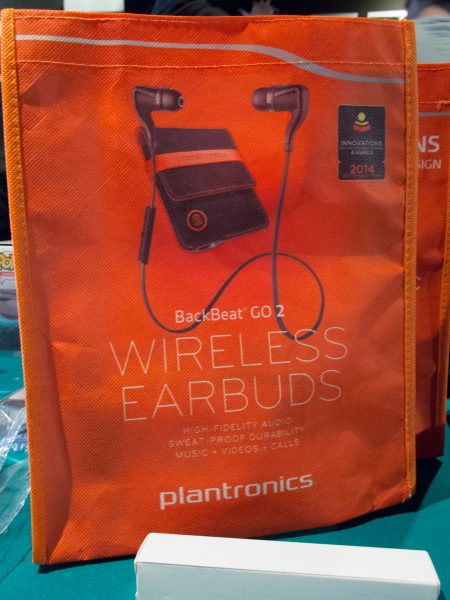 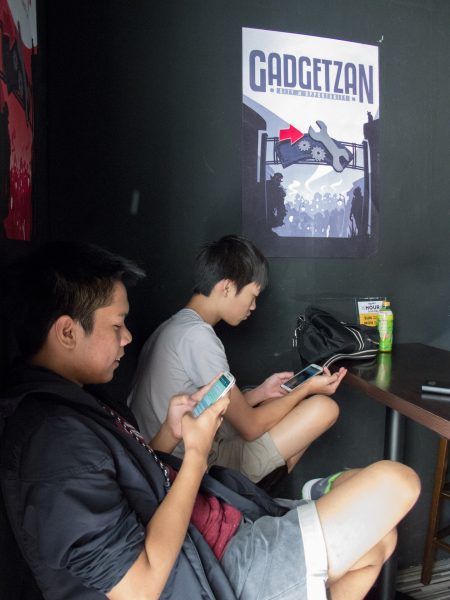 Some players saw Mean Factions of Singapore as a gateway to local tournaments. Bryan, a 20-year-old fresh out of national service, had just returned from the Malaysia Major a week earlier, eager to test his mettle. “Last month I got Rank 11 on Legend so I’m now trying to enter the tournament scene.”

Others were as fresh-faced as they get. For Michael, all he wanted out of his first event was the Fireside-exclusive card back.  “I like how you could just challenge your opponent at any time without being in a super competitive setting,” said the 17-year-old, who also commended the smooth proceedings. When asked whether he’d return for future gatherings, he seemed a little less than confident: “If I get better.”

It’s a reservation shared by Pathi, another first-timer. Enticed to participate together with his friend, the student sheepishly confessed to a losing streak: “The event is pretty good but I got wrecked. I lost two in a row but, yeah, it was quite fun.”

“I’ll probably come back,” he mused. “I just get wiped by the good decks so, I think I’ll build better decks then come back. Or I might spectate too.”

‘[Hearthstone] is still small compared to games like League or Dota but the community is close enough. It’s not toxic – there are some exceptions but it’s not that toxic. Well played, well played, happy feast of Winterveil!” he laughed, referring to voiced emotes that may pass as trash talk.

Up till then, the atmosphere had been immensely casual and relaxed. Some quietly huddled over their mobile devices or chatting, while others bemoaned the fact that Kabal was taking forever with their Bo5 placements. That changed once the tournament’s final phase was underway, streamed on televisions and projectors around the bar for all to see. As with any sporting event the crowd grew rowdy, choosing to indulge in either backseat analysis, what-if scenarios, reactions or scathing commentary. Standard fare, except the players could hear it too.

In one match, a finalist clearly changed their mind after eliciting a roaring “no” from the audience, prompting him to drop his selection and pick another card. In another series, the players found themselves receiving streams of blunt insults for their poor decisions and overall lack of skill. While the organizers did step in, passions remained high.

In spite of the distractions, 15-year-old Skye Lim and his teammates blew aside the competition to bring Jade Lotus to victory.

The two years spent playing and attending offline events had paid off. However, winning with the current meta did not mean he was happy with the expansion.

“It’s pretty cancer,” began Skye. “I think it’s a mistake to introduce Patches [the Pirate]. They wanted something new so we got the three factions, but Patches really changed everything.”

Skye felt that players were now incentivized to go with aggressive decks rather than control-focused ones “because Patches is too good.” He also said that the Grimy Goons and Kabal factions had classes that were underwhelming, whereas Jade Lotus would have the more consistent win rate owing to its balanced nature.

Be that as it may, his tone lightened considerably when the topic shifted to the local Hearthstone scene: “I think more people should come down for these tournaments. I have a few friends who don’t want to because they’re afraid to play, they don’t want to lose, but I think they should just try it out for the experience.”

This is merely another checkmark for the collaboration between Team Abyssus and Brewlings. The two are currently planning their next event slated for 21 January, catering to both Hearthstone and Street Fighter communities.

“Our aim is to actually grow other scenes, not just Hearthstone,” said Silfer. “We intend to expand into other scenes, to impart and share our skills and knowledge, and to learn from each other.”

Ade thinks there's nothing quite like a good game and a snug headcrab. He grew up with HIDEO KOJIMA's Metal Gear Solid, lives for RPGs, and is waiting for light guns to make their comeback.
Previous post Don’t miss out on these 7 free PC games by Ubisoft
Next post Final Fantasy XV Holiday DLC lands on 22 Dec with New Game+