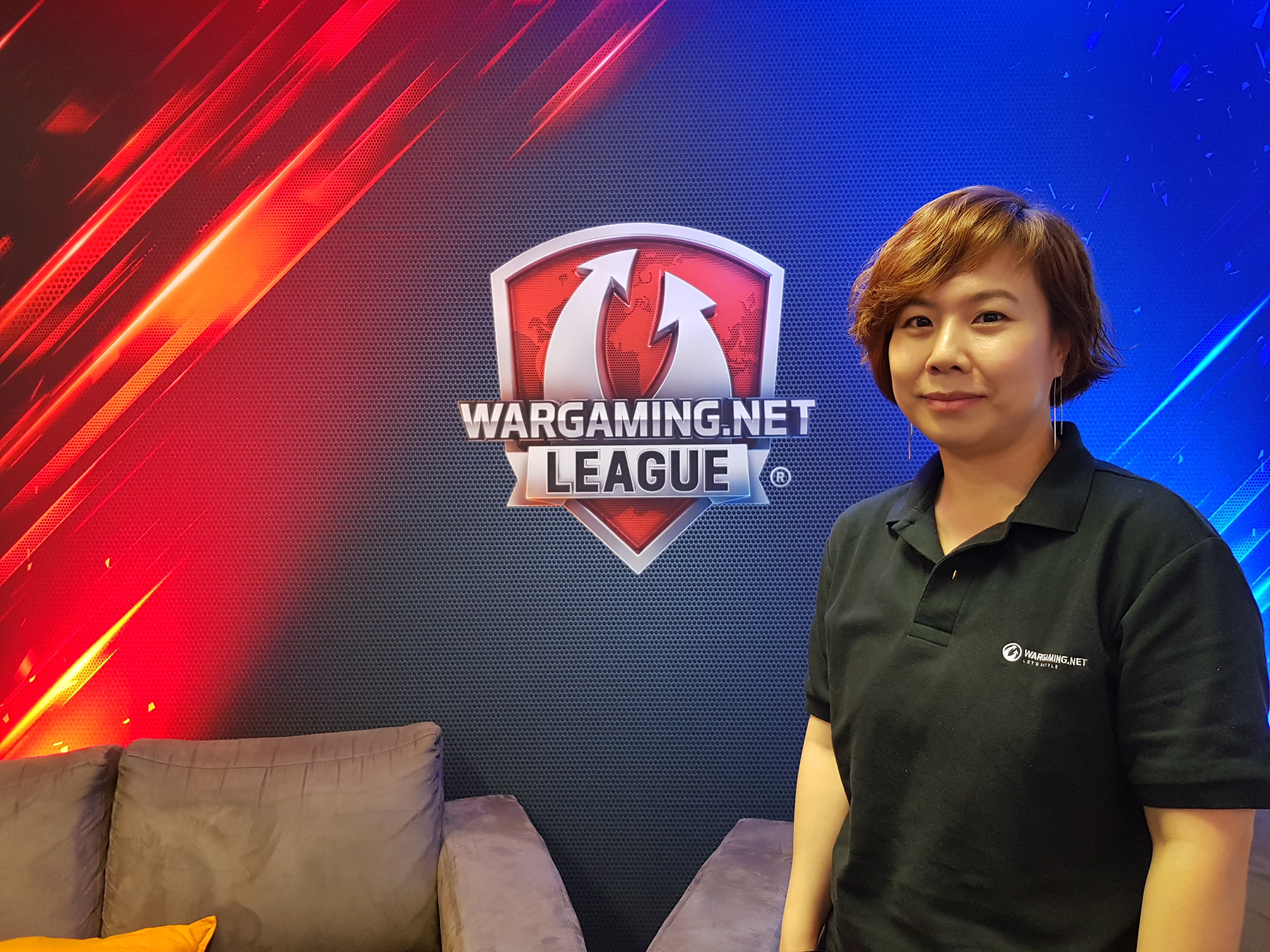 As the Head of Wargaming Competitive Gaming for APAC, Jini Jun has her hands full all year round. Part of her scope of work include developing the growth of the eSports community for World of Tanks in this region, as well as to ensure that Wargaming.net League tournaments are run smoothly. We managed to sit down with her to talk about her thoughts on the growth of eSports in Southeast Asia, her challenges, and more.

We haven’t seen a team from Southeast Asia at the pinnacle competitive gaming for World of Tanks. Why do you think this is so compared to other regions?
So we have our Gold Series, followed down by the Silver Series, and another casual tournament that is the Bronze. For Bronze and Silver Series, we do have a lot of teams from Southeast Asia, especially the Philippines. It will be a matter of time before these teams move up to the Gold Series.

So there’s still a gulf between the skills?
Yeah, I think, yeah.

What kind of steps or measures is Wargaming doing in helping the lower rank, the lower team to move up to the Gold Series?
It’s like the ones that we have for the casual tournaments. We have three, five, eight and ten tiers and they are all different tournaments. So, they can try out those, whichever their level are at, and then after that they can move up – all the way up to tier 10. After they have tried out those tournaments, they can try participating in our WGL series.

Apart from measures like this, what other steps do you think can help to bring up the level of competitive gaming in Asia Pacific?
The other stuff that we do is conducting training camps. It’s not online tournaments, it’s not like those stuff, so it’s just offline activities. We invite established players from regional teams, streamers, or let’s say, a famous player. These players will help to do some lectures for how you can improve your playing, or explain his experience as working as a team and stuff. Interested players who want to improve their game play or get some tips on how to be able to reach the WGL can come and participate at such camps or lectures.

How has the response been?
We started the program in Taiwan first, and expanded it to Japan and Hong Kong. We are going to bring it to another country soon too, and will be looking to do it more often and into more countries and cities. You can see it was positive, and players like it. In Taiwan for example, we had no intention of creating one event after another so quickly, but there are many players who want to attend even after knowing it will be the same featured player conducting the lecture. They really love these activities that we are conducting.

How has the response being like, since WGL move on to tier 10 tanks? Has it been great?
Oh yes, definitely. We saw an improvement in viewership by as much as 50% as compared to when we had tier 8. This year alone we also saw the average viewership grow by at least 10% for Season 1. The most interesting part is that the average watching time is now 13% longer too, which translates to an average match watching time to be about 35 minutes.

What are your thoughts on WGL APAC being dominated by one or two teams? Is it healthy for our region?
First, when I started three years ago, I was thinking the same way too. There would be no chance for the other regions to win. If you remember last year’s grand finals (2014/15), EL was an Asian team that got second place. Then, we saw that for one and a half year it was always Team Arete winning the Asian finals, but then, it’s now changed to EL. But if you see the other three Asian teams, it’s all new teams. So, I think a winner today may not necessarily mean they will be at the top of the perch forever. There will always be teams trying to catch up with them, and they will go on with tried and new strategies and stuff. So, I think it’s still good right now.

How long do you think it would take for World of Warships to be at a level that World of Tanks already is for competitive gaming?
That one I can’t really say [laughter]. It’s hard to say as we must always first see how the players and the community react before we roll out competitive gaming for Warships. World of Tanks Blitz for instance, well I wasn’t expecting it to be huge but we had a lot of attendees and participants and in just three days the participation list was full. So, no one knows. We’ll have to start and see.

Okay. Do you think it will be a younger or older crowd?
Probably a bit younger or similar.

eSports is such an important component for Wargaming. What would you say is your biggest challenge in your role in the company? And what would you say is the highlight of your career so far?
That’s a tricky one [chuckles]. My challenge is still, I would say well, I wouldn’t say the performance, but as you mentioned the numbers of the teams for eSports is still not that big in Asia Pacific, so that’s always a challenge for me and our team. With that, we are still improving, so I think that will be the most challenging part for me still.

Because WGL is always the main highlight for my team and I, ensuring that every Finals run successfully would each be a highlight for me. Last year’s Rumbles in Tokyo would probably be the most recent highlight for me, I supposed. Each season may only last three months, but we have to start at least a year before hand so there’s a lot of work going on…and then it climaxs with a Grand Finals.

Aaron Yip is an industry veteran with more than 15 years of experience. When not spending time on his gaming PC and consoles, he can be found in Hyrule solving ungodly puzzles and collecting gems.
Previous post Sony’s Limited Edition “Naruto” Walkman and Headphones are beautiful
Next post Catch the PGL CS:GO Minor Championship Asia live on Twitch