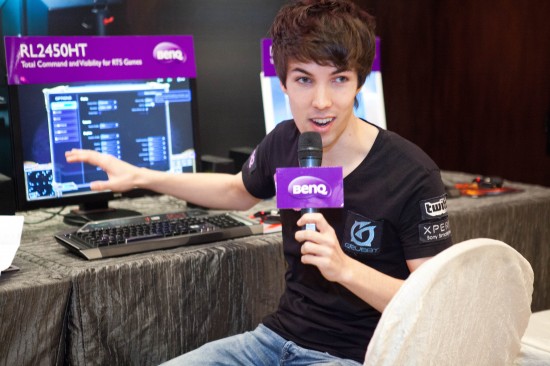 Manuel ‘Grubby’ Schenkhuizen played at Intel Extreme Masters Singapore last weekend, narrowly losing in the Grand Finals to Western Wolves’ young prodigy Sting. We sat down with him before the playoffs started to get his insights into professional gaming.

RGB: Did you ever think, when you were first started out as a professional gamer, that you would one day be a legend?

Grubby: *laughs* No. Actually, I didn’t believe that I could be the best at anything in life, in general.

Grubby: I don’t know, I just didn’t consider myself to be someone who could be a champion. Maybe I was too modest. I didn’t really consider that, but I didn’t start out playing so I could be a winner. I just played and focused on becoming better, and that was an ambition by itself, just to become better.

RGB: You’re considered to be one of the best gamers in the world. So is there anything left in e-Sports that you haven’t achieved?

Grubby: Tons of things. So many things, like co-developing a product, tying my name to it, producing it, and bringing it out – like co-branding. Maybe having my own team.

I may or may not do any or all of this, but there are a lot of things I haven’t done yet. Also, winning big StarCraft II championships. That hasn’t happened yet. And to be one of the most consistent players over a very long time, because I’ve been playing RTS games longer than almost anyone else right now. The longer I keep at it while still being successful is also a record unto itself.

RGB: So for how long more do you see yourself in competitive gaming?

Grubby: So I’ve learned from experience that estimating or predicting this is highly inaccurate. So I stopped trying. I would like to continue for as long as I can.

RGB: Do you think it’s important for a player who is just starting out to have a team behind him?

Grubby: I think it’s really quite important, because when you’re just starting out you don’t really know how everything goes yet. I think for [new players] it’s very important. Either a coach or agent, or a team, is quite essential for a player just starting out, so he can focus on playing.

RGB: Why did you choose to go independent?

Grubby: I asked myself if there was anything a team could provide for me that I couldn’t in someway arrange for myself and the answer was no. And then I thought: how would going independent benefit me? I had been thinking about it for a while, and there were many answers.

I can be more independent, I can have more freedom; and I can choose for myself the companies that I want to work with. If I liked a product or service, I could ask them to sponsor me. It’s different from being handed a list of sponsors which I have to use.

It offers more integrity for me because I really believe in the product of the companies I choose. I think that’s important for me that fans know I can display that kind of integrity.

And in the end, any time I have a plan to start a new vlog series, or to go practice in a special place like Korea, any plans I want I can immediately make them happen. Because we’re just a small team, so we can make decisions really quickly. I think that kind of thing really helps me to be mobile in a world where that’s very necessary. RGB: You’ve had a lot of sponsors through the years. What a lot of local players experience is that with sponsors it’s difficult to get monetary support – they prefer to support with products in kind. Based on your experience why do you think this could be the case?

Grubby: Rather than complain about why certain companies want to commit money to a player or a team, I think it’s important that we look towards ourselves and ask why are we a player, or a team, that deserves to get financial support. Because in the end it’s not charity.

There is some idealistic sensibility of wanting to grow e-Sports. Companies also want to see e-Sports grow, and there are always a number of people within marketing departments who actually have the passion for e-Sports. They have idealistic motives. But these companies also need to see some form of ROI, to see their brand strengthen or to have its brand awareness increase.

So we must look towards ourselves and say: I need to become the player or the team that is able to offer the kind of visibility, exposure, and results, or video, or written content for that company. Anything that makes it easy for a marketing person to go to their boss and say that is why we’re committing resources to this venture.

Of course sometimes it can be challenging, and sometimes we need to go through a natural learning process to be able to develop that kind of value for sponsors, but this should be our ambition.

RGB: Another entity local gamers like to blame is our Singapore government. Do you think players should be relying on the government to get them to tournaments?

Grubby: Maybe I’m lucky, but nothing I have achieved has had any help from the government whatsoever. The Netherlands and Singapore are quite wealthy countries, so there are plenty of opportunities. There is nothing really big there to prevent people from achieving their goals.

I once was invited to a crappy game slash art show as someone to draw an audience – and a total of zero people showed up because there was no advertising. It was just a complete failure of an event. But then because they are considered ‘Arts’, the organisers got a very big subsidy, so that in the end they didn’t lose any money at all.

And I think, wow, the government spends money on some crappy art show and we have to scrape by in gaming. But I don’t know, maybe we (just) have to be creative in combining e-Sports with something that is already part of the foundation of government subsidies.

At the end you have to rely on yourself first. Anything else is extra.

Grubby: At the start of the day, I usually decide which specific areas of my play I will be focusing on and trying to improve. If I already know what my next tournament is and who I’m going to be facing, my training will be centred towards training specifically for those opponents, because everyone requires very different responses and approaches.

If that is not the case then I will focus just on training my fundamentals. Either to become better at minimap awareness, or map control, or speed, or strategies. I’ll be trying to develop those.

Once I’ve decided what I’m gonna do, I’ll be mostly playing ladder on Battle.net. I’ll do that for about eight hours a day, and in between sometimes I’ll watch VODs or replays of my opponents and make additional plans.

RGB: Do you have a pre-tournament routine?

RGB: Do you have any advice for aspiring RTS gamers? Especially for the really young ones?

Grubby: There’s tons of advice to give. I’ll try to summarise.

As a pro gamer and an aspiring pro gamer, it’s important to be able to focus one hundred percent on practicing when you are practicing. You have to have a really clear mind, an empty mind. It’s important that whatever worries you have, you deal with them as soon as possible, and if you can’t, you’ve got to put them in a box for a while, and close that box. Because you can’t be thinking about other things when you’re playing. That’s number one.

Number two is harmony with your parents. That is greatly conducive to having less stress. It would be nice if somehow your parents are, if not hundred percent supportive, at least understanding, because there comes a point in every aspiring pro gamer’s life where the parents will have to go through a kind of switch mentality to realise that you’re not just an avid gamer or an addicted gamer, but you’re a person for whom gaming is a passion, a lifestyle.

Trying to get them to understand that aspect is quite crucial. With their support, it will be able to be an easier journey.

Finally, it’s always important to keep enjoyment at the centre of everything. Don’t wake up and say, aahh, I have to practice, I don’t feel like it, it’s so boring, but then I want to get better because I have this ideal image of what it feels like to be a pro gamer.

RGB: Were your parents supportive of your decision to be a pro gamer?

Grubby: At first they were like any other parents. They felt I was gaming too much. I did go out with friends but I didn’t really do homework. I was doing okay in school though, I was getting good grades. So that was kind of the rule – if my grades were good then I was allowed to do what I wanted in my own free time. That was always the case.

But still, my mother would’ve liked it more if I had been doing more traditional sports. I was always playing games. She accepted it, but wished it were otherwise. Until a point where she picked me up from a Bring-Your-Own-Computer event.

It was supposed to be closed already and everyone was supposed to be picked up by their parents because we had our computers there. So my mum came by with the car and she started asking: “has anyone seen my son? Where’s Manuel?” and somebody said: “he’s over there, he’s playing on stage.”

And my mother was like: “my son? My son playing on stage?”

She went over and there was this small gathering of about 150 people, and they were looking at me. I was playing the finals and there was a Danish star that was in the Netherlands. He was the favourite for the tournament and I was playing against him. And I won a very small amount of money, like 100 or 200 Euros for winning that tournament.

But the significance of winning that tournament, with my mother watching…finally she had that click. She told me later there was that click for her; she said, “it’s more than just an addiction or a hobby. It’s like a passion. People are watching it.”

Finally she understood, that her son is also an entertainer. It’s not much different from when I was playing the piano or performing at school. People like to watch it. I’m an entertainer. And suddenly she could connect it with something she understands and recognises.

RGB: Cassandra is Singaporean. Do you think you’d ever want to settle in Singapore some day and contribute to the e-Sports scene here?

RGB: Okay, we’ll hold you to that!