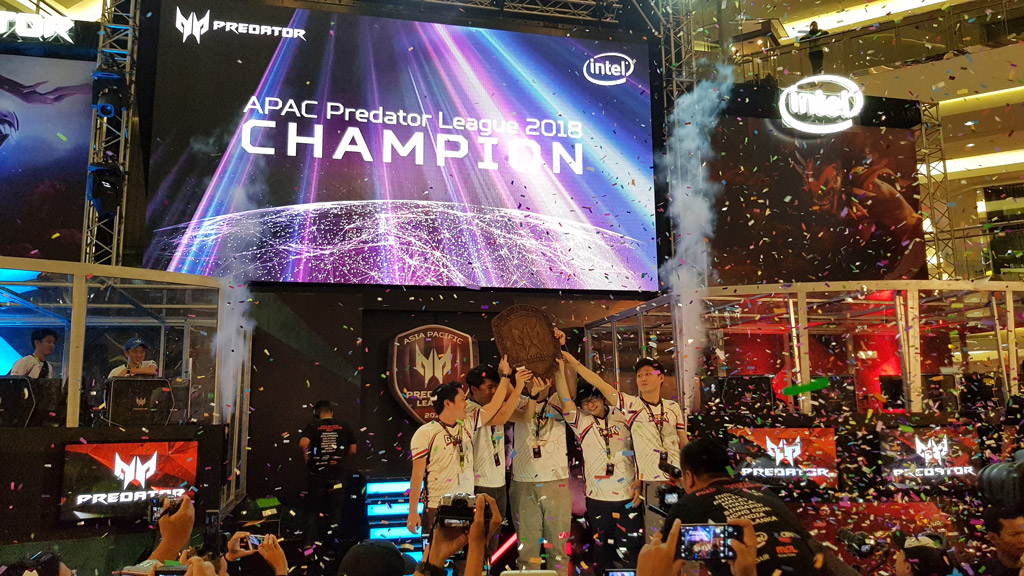 Singapore’s representatives Ten Twenty had a decent showing at the Asia Pacific Predator League 2018, but were stopped in their tracks by the home team BOOM ID of Indonesia in the second round.

The team had dispatched Hong Kong’s Azure eSports with relative ease in the first round, but just couldn’t find a way past the Indonesians’ superior team play and lost 2-0. Ten Twenty were then given a second chance in the Lower (aka Loser) Brackets of round two, but despite mounting a fiercer resistance fell to the Philippines’ team Quid Pro Quo 2-1. Hopefully at the next Predator League Finals, there will be a separate competition area for matches to be played physically further away from crowds.

According to one Ten Twenty’s player, however, he felt they could have beaten Quid Pro Quo 2-0, as they had started strongly. “We were actually doing very well in the game, but became overconfident and did not follow our strategies as planned”, he added. Another Ten Twenty player also thought that the team did not cope well with the noise level around the competition areas (as only selected matches were played in closed-off booths on stage), and cited the lack of experience to cope with such distractions.

The group will now regroup once back in Singapore and reassess their performance. They now hope to qualify and mount a stronger challenge at next year’s Predator League Finals in Bangkok.

Coming back to BOOM ID, their performance in the Finals were a little more dramatic (you can catch replays here.). Losing 2-1 to one of Malaysia’s top DOTA 2 team, Geek Fam (and eventual champion), in a closely fought Semi-Finals, the team climbed back out of their Final Lower Bracket by eliminating Singapore’s vanquisher Quid Pro Quo 2-1. Kudos must be given to the Filipinos, who lost 2-0 from their first round match with Geek Fam, and so had the toughest journey in reaching their face-off with BOOM ID. Their efforts in this tournament were not entirely in vain, as they took the third spot in the league and with it, US$15,000.

The final match between BOOM ID and Geek Fam had all the hallmarks you’d expect from two very good DOTA 2 teams, with an excited home crowd roaring at each point scored by the Indonesian team. But Geek Fam is Southeast Asia’s 4th ranked DOTA 2 team, and their superiority in experience and team work showed as they completely dominated BOOM ID. While BOOM ID had put up a valiant fight against their first round tormentor, they were in fact, completely outclassed despite a flattering 2-1 scoreline.

It was heart-breaking for BOOM ID, to say the least, but Geek Fam has proven that they are now one of the DOTA 2 team to continue to watch out for in Southeast Asia. They take home the Predator League Shield trophy, US$50,000 and the title of champion of Acer’s inaugural Predator League.

Aaron Yip is an industry veteran with more than 15 years of experience. When not spending time on his gaming PC and consoles, he can be found in Hyrule solving ungodly puzzles and collecting gems.
Previous post This 9-year old’s Gundam RX-78 mobile suit is awesome
Next post Revisit Johto in this orchestral arrangement of Pokémon Gold and Silver