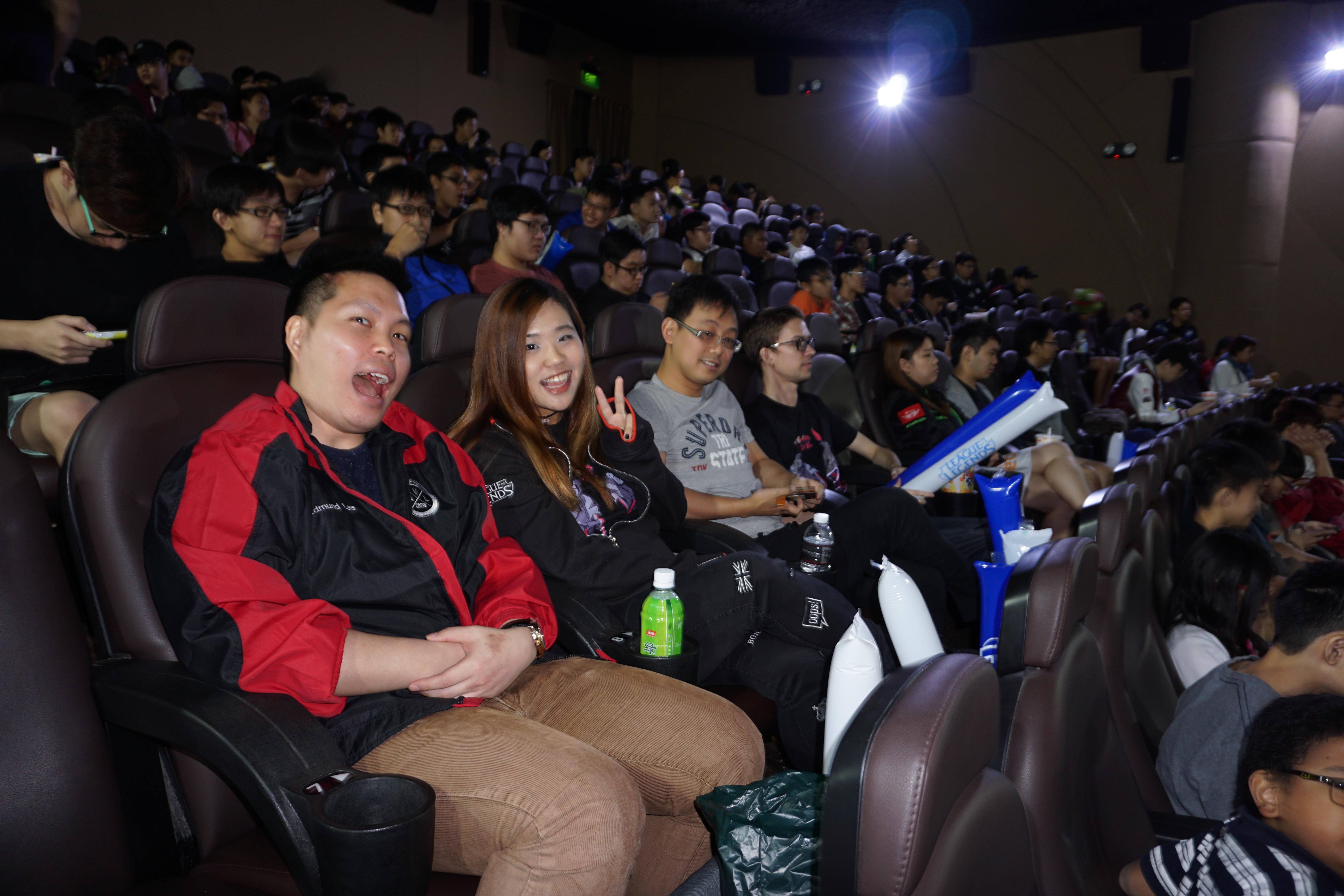 You’ve watched eSports tournaments at home, at a friend’s place or even at small viewing parties, but have you ever tuned in to a livestream from the plush comforts of a movie theater?

That’s exactly what over 300 passionate fans in Singapore got to do last Sunday, 30 October, at Shaw Theatres Lido in Orchard. Organized by Garena, the regional publisher for League of Legends in Southeast Asia, these fans had already endured a grueling queue for the tickets a week earlier – a sales event where demand outstripped supply within 30 minutes.

The tournament in question was the 2016 League of Legends World Championship, specifically the six-hour Grand Finals between the reigning crowd favorite, SK Telecom T1, and challenger Samsung Galaxy, both from South Korea. More than 20,000 people filled the Staples Center in Los Angeles, USA, to witness this nail-biting series in person, with millions more spectating online.

A 15-hour time difference meant the show started at 7am locally, ensuring that a mix of sleep-deprivation and excitement was scrawled across the sea of faces. League of Legends is one of the largest games in the world and that day’s demographic reflected that – we saw friends, couples, even parents accompanying children; a gaming community get-together that is still quite a sight to see.

Thankfully, the registration process itself was a breeze, allowing everyone to busy themselves with a light breakfast or simply settling in. Before the actual matches started, Garena’s Game Masters attempted to engage with the anemic crowd.

On one hand, you could attribute the lacklustre response to it being an early Sunday morning, coupled with the sleep-inducing chairs and the innate reservation most locals have. On the other hand, there was the fact that the semi-finals between SK Telecom T1 and ROX Tigers were simply phenomenal – so much so that, for some people, the climax of the World Championship was already over.

As it turns out, Samsung Galaxy had plenty of fight in them. What was initially shaping up to be a 3-0 sweep in SKT’s favor suddenly turned into a full best-of-5 series after SSG’s shocking comeback, in what is now the second longest match in Worlds’ history. That got the crowds’ unreserved attention, along with their cheers and thundersticks-enabled applause. Our chairs literally shook from the excitement.

(Sidenote: You can watch the official VODs here or the New Viewer version of it on Twitch.)

To their credit, Garena’s GMs persevered in their efforts, showering the crowd with prizes and lucky draws in-between matches, consisting of some drool-worthy official merchandise. They even managed to elicit a few tongue-in-cheek “TSM” shout-outs from the fans, referencing the US-based Team SoloMid who have, in various ways, risen to meme status.

Unfortunately, these sessions also cut out the post-game commentary. We saw a handful of people whipping out their phones to watch these segments, not wanting to miss out on the thoughts of James “Dash” Patterson, Mitch “Krepo” Voorspoels, Jake “Spawn” Tiberi and Martin “Deficio” Lynge from the analysis desk.

All that said, the viewing experience was certainly something worth talking about. While the seating arrangement does hamper conversations between friends, as opposed to an eSports bar or some other homely venue, the closer proximity to the large screen does make it easier to appreciate the match itself.

Rather than squinting at a mess of colors, we got to make out what exactly is happening when SSG makes a push for STK’s Nexus amid a swarm of minions, or when the legendary Lee “Faker” Sang-hyeok lives up to his reputation by waltzing through death and chaos to deliver a match-swinging kill. Sure, you’ll get the same visual clarity from the comforts of home but, sometimes, scale does make a difference.

More importantly, what most homes don’t have is a multi-thousand dollar speaker system, playing at levels that would easily tick off neighbors. eSport broadcasts haven’t progressed to the point of supporting surround sound, so hearing a stereo source in a cinema was initially jarring, but that’s easily forgotten once enough time has passed.

In other words, it’s a similar argument between watching movies at home or at the theater: presentation quality. And this being competitive gaming, you’re not going to be annoyed by talking strangers or crying babies because neither exists in an eSports viewing party.

Now that the fans have proven – with their wallets, no less – that there is a demand for such events, the baton now passes back to Garena.

Garena Singapore got back to us with their thoughts on the event, citing surprise at the turnout considering the time.

“We must thank the community for their warm support, so we are more confident in creating more such events for our players in the future,” responded Tony Jiang Tian, Garena Singapore, via email correspondence. “For this particular viewing party, there is still much room for improvement. We had 300-plus tickets for sale, but the actual demand was much more than that, [at] around 500. We will definitely upgrade our future event capacity accordingly.”

“While the traditional Asian mindset still tends to be more conservative when it comes to gaming, we do believe that eSports events now start to appeal more to [the] general public, and eventually we will receive the support similar to mainstream sports.”

Ade thinks there's nothing quite like a good game and a snug headcrab. He grew up with HIDEO KOJIMA's Metal Gear Solid, lives for RPGs, and is waiting for light guns to make their comeback.
Previous post Masquerada: Songs and Shadows Review (PC)
Next post Call of Duty: Infinite Warfare outlines side missions, YOLO mode and more