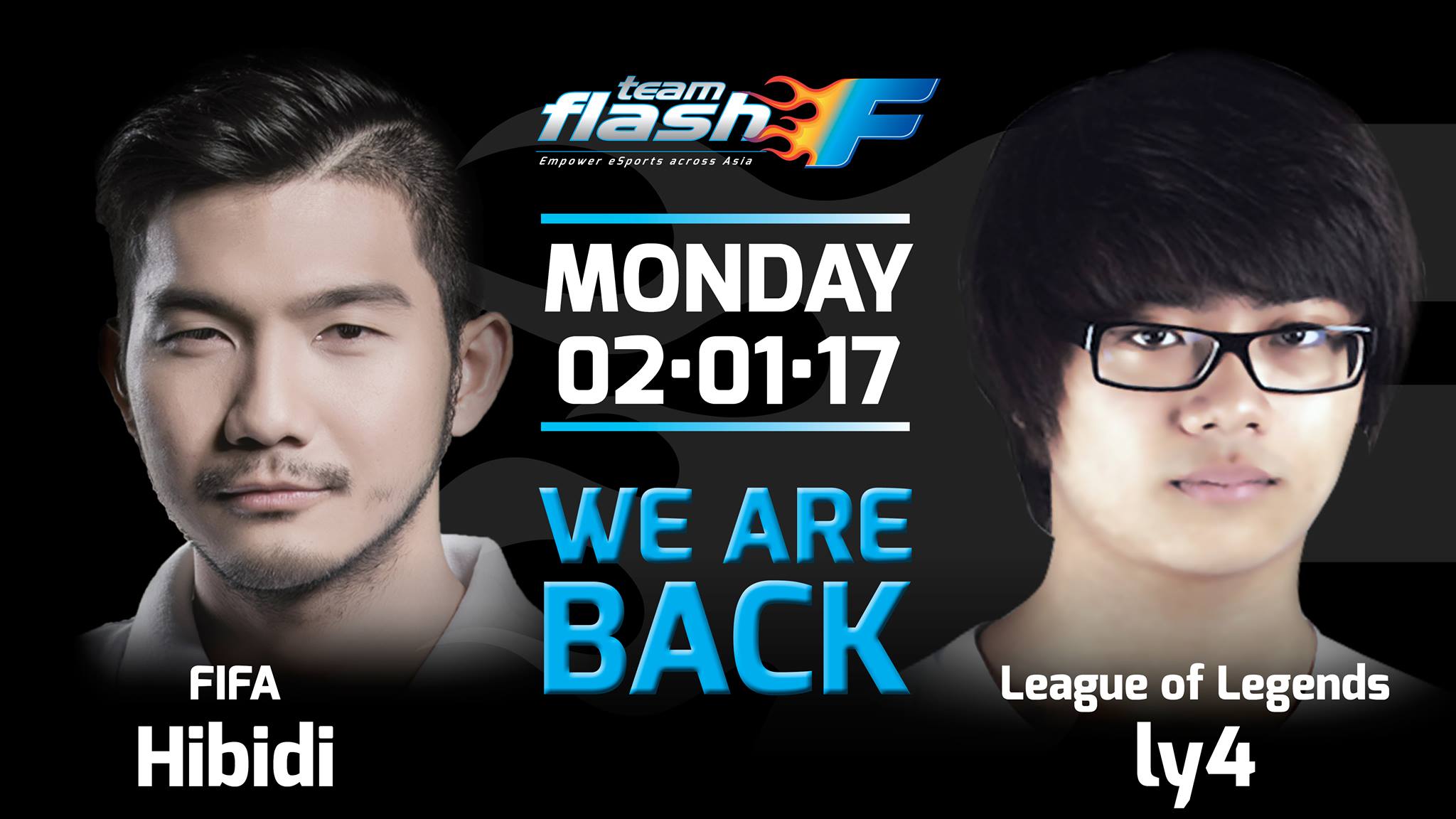 Some dreams never die. Following a two-year absence from the competitive gaming scene, Flash eSports founder Terence Ting has revived the brand as Team Flash, with offices located in Singapore and Indonesia.

Recently crowned third at the Garena Premier League 2016 Summer, Team Vestigial has proudly kept the Singapore banner flying in the regional circuit, their efforts going as far back as 2013 under the name Insidious Gaming. Now representing Flash, the team’s first order of business is The Legends Circuit 2017 Spring which starts in early February.

“Flash was a very supportive eSports organization and helped the scene a lot previously. I’m very excited and honored to be able to represent Flash once again and I’m confident our collaboration will bring eSports to greater heights,” said team captain ly4.

Wen Jun “hibidi” Chiang is no stranger to either competitive FIFA or, indeed, Flash itself. Before joining team Impunity, the star played under Flash since 2010, rising to become a two-time gold medallist at the World Cyber Games (WCG) Singapore. His latest success at the Garena EA Champions Cup 2016 Winter made national headlines, where he single-handedly defeated favorites from Europe to secure a bronze medal for his team.

“Team Flash was the all-conquering force in Singapore from 2010 to 2014. 2017 will be no different. We are back to shake up the world, and we intend to do it with more panache than ever. The best is yet to be,” said hibidi.

“When I left the scene behind in 2014, I never thought I would return,” said Terence Ting.

Flash eSports’ brief but storied history showcases just how much of a major player they were. With over 50 podium finishes to their name, their achievements include gold medals at WCG Singapore and first-place finishes at Electronic Sports Thailand Championship, World Championship Series Singapore, and at the International e-Sports Federation Singapore Qualifiers.

On a grassroots level, they ran two seasons of the Flash Dota 2 League, co-organized with the help of notable eSports player Tammy “Furryfish” Tang.

Despite their successes, the Flash eSports journey ended in early 2014. Contractual obligations with sponsor Cooler Master was cited as a catalyst for the shutdown.

After disbanding the team, Ting went off to join the marketing team at Attica, one of two longest standing nightclubs in Singapore. Those two years of experience, he says, will help make Team Flash even stronger.

Of course, the spectacular rise of competitive gaming played a role too.

“eSports has come a long way with million-dollar prize pools and renowned business owners and celebrities investing, causing the stigma of video gaming to gradually disappear. I am extremely fortunate to have found a team of like-minded professionals to continue the Flash legacy,” added Ting.

Joining him is co-founder Andrew Tobias, who will be tapping on his past work as community manager at NVIDIA Indonesia to help develop the brand’s presence in the budding market.

With a stake in both League of Legends and FIFA Online 3, Team Flash has naturally attracted the attention of Garena, the exclusive regional distributor for both eSports titles.

“We are very happy to see organizations such as Team Flash stepping up to invest in Singapore’s eSports infrastructure. Garena has always been a strong advocate for eSports in Southeast Asia, and the return of Team Flash bodes well for continued development of eSports in Singapore,” said Jason Ng, Garena’s vice-president of group game operations.

2016 saw huge developments for eSports, both globally and regionally. With increasing viewership, financial interest, and the launch of a new eSports and gaming hub, there certainly hasn’t been a better time than now to make a grand return.

Stay abreast of Team Flash updates on both their community hub and Facebook page.

Ade thinks there's nothing quite like a good game and a snug headcrab. He grew up with HIDEO KOJIMA's Metal Gear Solid, lives for RPGs, and is waiting for light guns to make their comeback.
Previous post We are giving away 1x WD Blue 1TB SSD!
Next post New Gaming Motherboards from ASUS