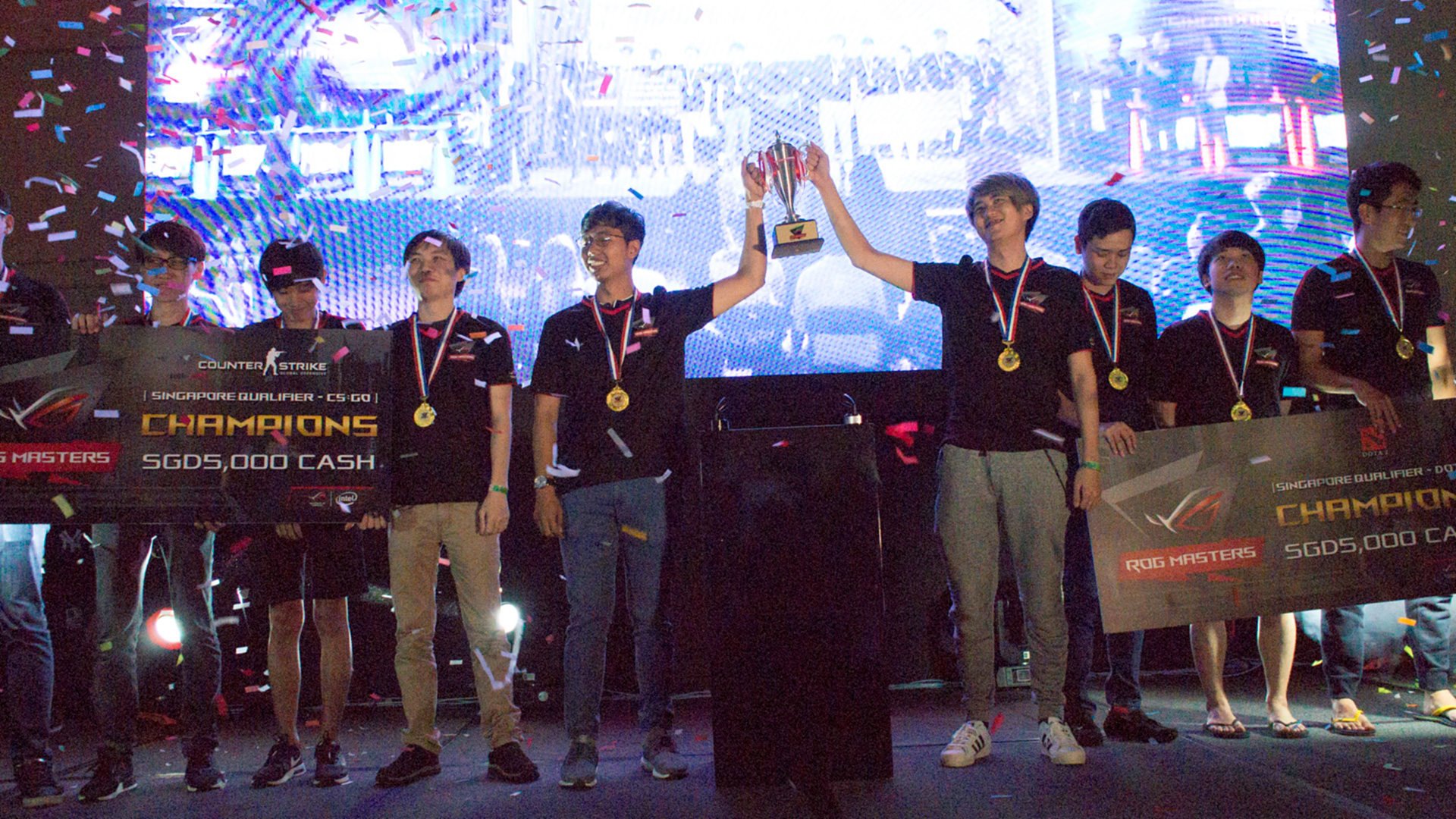 Taking center stage at STGCC’s gaming zone is the ROG Masters 2017 Singapore Qualifiers, a set of tournaments jointly organized by ASUS and Gam3.Asia. As with any good convention showing, the stakes were relatively high. Day 1 saw the climactic end of a three-week journey for local Counter-Strike: Global Offensive and Dota 2 teams, the winners taking home $5,000 in prize money and a nation-representing slot at the APAC regionals in October.

Only finalists braved the stage, competing under the scrutiny of a full audience and viewers online. Fighting under the CS:GO banner were One Time Wonder and Axylum, both of whom had secured clean victories at the semi-finals a week prior. When they finally clashed, the battle seemed anything but predictable.

The first match in this Best-of-3 saw One Time Wonder picking up an early lead over Axylum in the bomb defusal map Mirage, only to falter after taking their eighth round. A series of close exchanges saw the teams matching point for point till Round 25, yet Axylum’s gaining momentum proved too much to oppose.

Unfortunately, that momentum fizzled out far too soon. One Time Wonder returned to blaze through the second match in Cobblestone, taking advantage of their greater economy and positioning for a 16-4 win. Not keen on repeating history, Axylum rallied for a strong pushback in Nuke not once but twice, reestablishing themselves as equals against the domineering One Time Wonder. Despite fierce resistance, often boiling down to the last man standing, the tense see-saw eventually favored One Time Wonder’s corner.

Team captain Muhd Faiz ‘dejavux’ Ismam was all smiles post-ceremony, yet his story prematurely ends here – the 23-year-old can’t join his team in the APAC regionals due to National Service obligations. Even so, he wishes his teammates well. “Hopefully they can get more experience at the Asian qualifier and do the Singapore scene proud,” adding that they’ll aim to put on a good show in Manila.

Some hours later, the venue grew livelier as the Dota 2 tournament (and its larger fanbase) approached. This time the crowd proved too large for the available seating, with plenty of onlookers hanging by the rear and sides reacting to the on-screen action. The subjects of their attention were Desert Tiger and ABC, the teams having proved their mettle in the weeks leading up to the finals. Here the former stood out as underdogs, as ABC’s roster contained veteran professionals such as 24-year-old Nicholas ‘xFreedom’ Lim.

The first match saw ABC drafting a crowd-control heavy team with picks such as Earth Spirit and Warlock, while their opponents went with options such as Riki, Wraith King, and Lina. Ultimately, ABC’s selection gave them the upper edge during confrontations, and once they had taken Roshan the team simply snowballed to victory, ending matters in just under thirty minutes.

Game two kicked things into higher gear as Desert Tiger placed their bets on a riskier, more offensive draft while ABC stuck by pairings such as Omniknight, Outworld Devourer, and Earthshaker. Things kicked off on an even footing and remained in lockstep for much of game, only for Desert Tiger to crack under the pressure around the 50-minute mark, overextending themselves one too many times. After both teams expended their buybacks, ABC slowly and methodically crept their way into Desert Tiger’s territory, reducing their opponents and their throne to ghosts and rubble.

ABC’s xFreedom attributes his team’s up and down performance to communication troubles. “We just couldn’t hear each other,” he states, calling back to a game pause early during the tournament. Though the team is happy with the outcome, fans may be dismayed to hear that they won’t be proceeding to Manila due to player commitments. As such, runners-up Desert Tiger will be representing Singapore at the APAC regionals in October.

Helping to present the prizes was ASUS Country Manager Emma Ou, who was happy to see the crowd’s turnout and excitement, not because it was a tournament in their name but because it aligned with the brand’s purpose. “ROG (Republic of Gamers) is not just branding. We’re trying to build up a community and that’s very important to ASUS.” She leaves with a parting note for the winners: “I have 200% confidence in the Singapore teams and believe they can win the regional and global finals.”

The ROG Masters APAC Qualifiers will be held in Manila, Philippines from 26-29 October 2017.

As for STGCC, the esports buzz isn’t over just yet. Today sees the Vainglory Championship 2017 SEA Open running all-day, with the finals scheduled to start at 5pm.

Ade thinks there's nothing quite like a good game and a snug headcrab. He grew up with HIDEO KOJIMA's Metal Gear Solid, lives for RPGs, and is waiting for light guns to make their comeback.
Previous post The Hidden Gems of STGCC 2017 that you wouldn’t want to miss!
Next post Games gets a much-needed boost at STGCC 2017