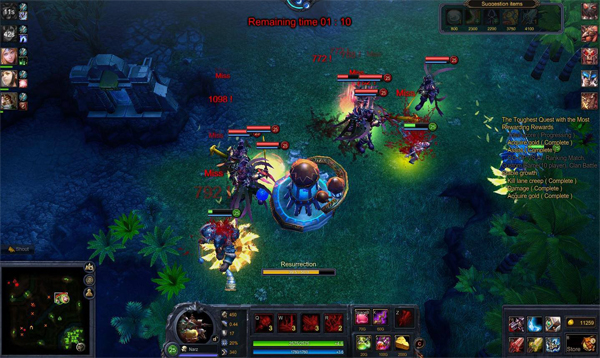 Last weekend has been particularly exciting for local gamers, especially for those with a little competitive streak in them. Take Chaos Online’s first Invitational Tournament, for example. With the event still fresh in our memory banks, the developers have decided to announce a few new things for the recently launched MOBA.

Before we get to what’s new, let’s take a moment to congratulate last Saturday’s winners, who’ve managed to bring home a total cash prize of $6,500 – pretty impressive for a debut tournament!

The Chaos Online Invitational journey doesn’t end here, either. On 6th and 7th July, our Malaysian neighbours will get their own shot at the RM4,800 prize pool. Held at FTZ Subang Jaya, the two-day tournament will have its own schedule and live streams, of which more information (including registration) can be found at the event website.

As is the fate of all free-to-play games, Chaos Online now has a Cash Shop up and running effective immediately. Performance-boosting items such as Potions, Skins and Charms can be purchased, as well as the Heroes themselves. With the Cash Shop live, only 30 Heroes will be freely available on a rotational basis. Permanently getting a Hero will require the player to spend Red Soul Stones on said character.

In conjunction with the shop’s opening, a 2x EXP and GP boost will be running from now until 1st July, 11:59PM. You can also earn free Red Soul Stones by participating in their Facebook App – sharing gets you a single-use code for 4 Stones while each invited friend is worth 5 Stones.

The items mentioned in the Cash Shop definitely raise an eyebrow with regards to fair play, especially in a PvP-oriented genre such as a MOBA. However, with the game still in its infancy there’s more flexibility for change; someone has even given a go at the suggestion board already.

Now that F2P MOBAs are becoming the next MMORPG of the industry, it’s going to be an uphill struggle for Chaos Online to bring in players. The Online Invitational is clearly helping with the marketing but ultimately, word-of-mouth and general impressions will be all that matters.

If you’ve already tried the game, do let us know what you think!

Ade thinks there's nothing quite like a good game and a snug headcrab. He grew up with HIDEO KOJIMA's Metal Gear Solid, lives for RPGs, and is waiting for light guns to make their comeback.
Previous post XCOM: Enemy Unknown Has Landed For iOS
Next post Razer Surround Grants Virtual 7.1 to Your Headphones