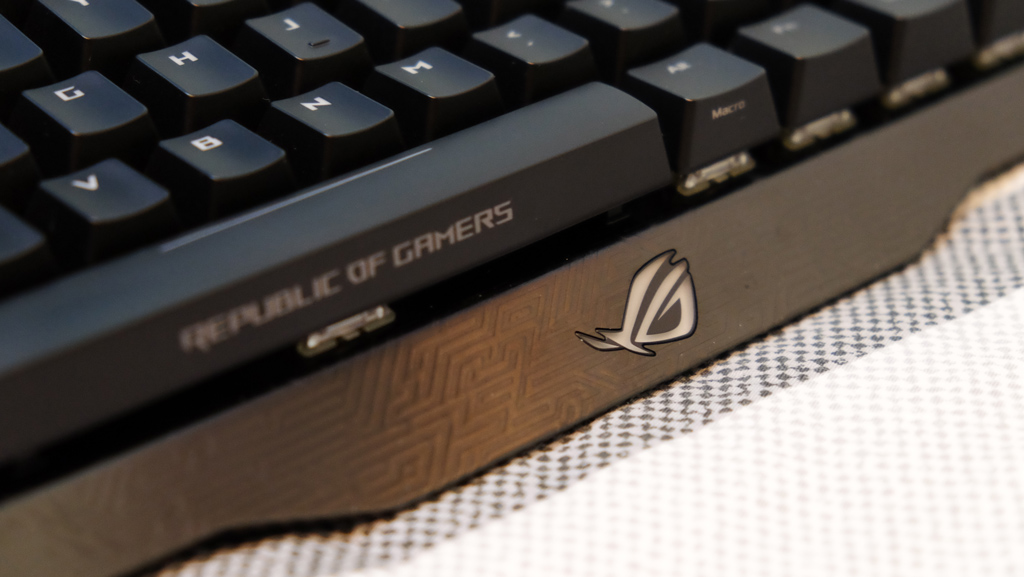 I’ve always preferred tenkeyless keyboards (after all, they create more space and are generally easier to center, thus enabling better posture) over their full-sized counterparts, but I’ve had people tell me that the number pad is indispensable for them. The reasons are varied, ranging from quibbles over how keyboards look odd without a number pad to the fact that they do extensive data entry.

Ultimately, you’re forced to make a choice between the two form factors, and you’ll have to live with that decision even if you have a change of heart later on. 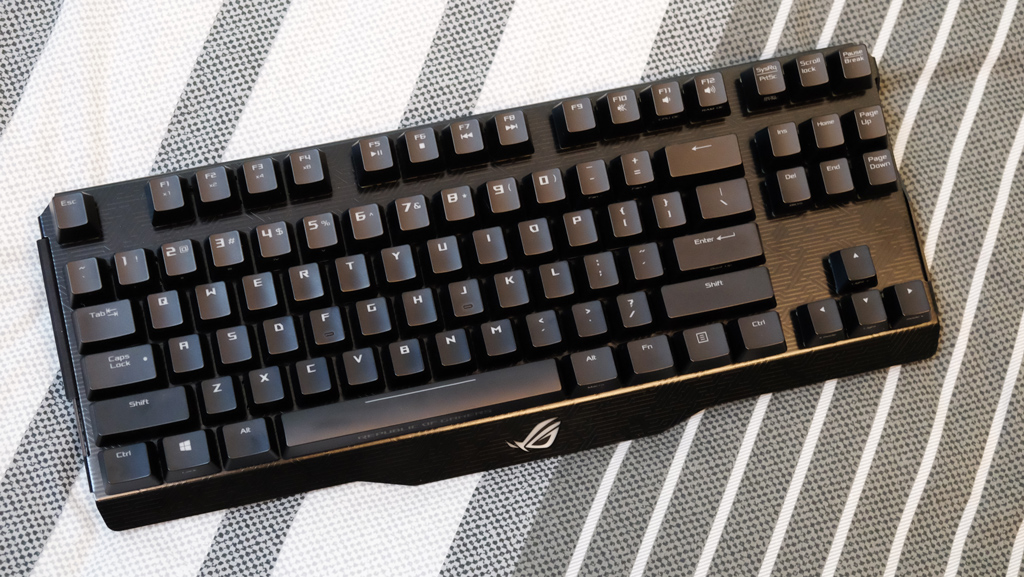 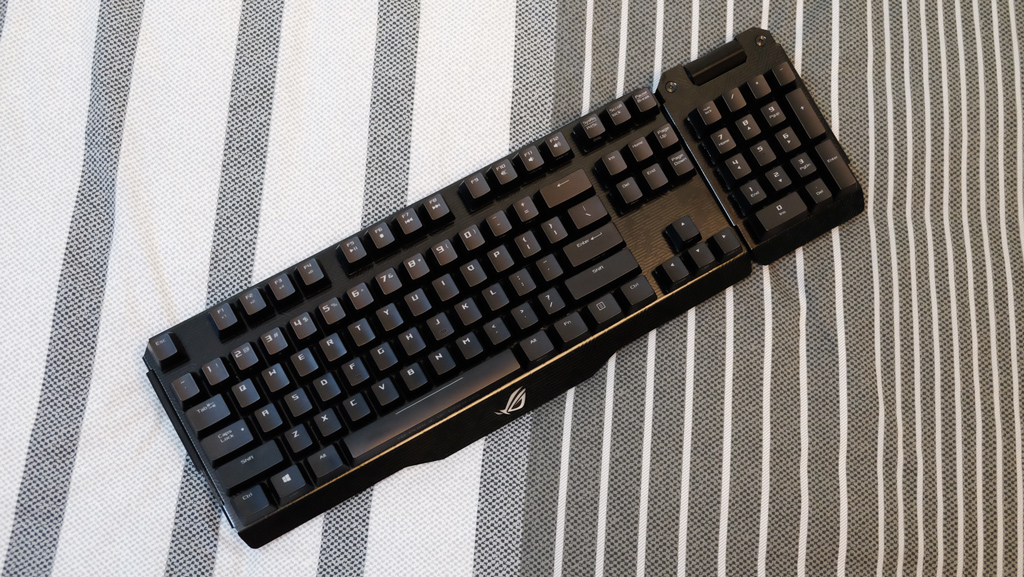 The ASUS ROG Claymore attempts to give gamers an added degree of flexibility with its detachable number pad, which you can attach on either the left or right side. It’s actually a wonderfully convenient system – the number pad snaps on and off easily, and the metal contacts are protected by snug rubber grips. 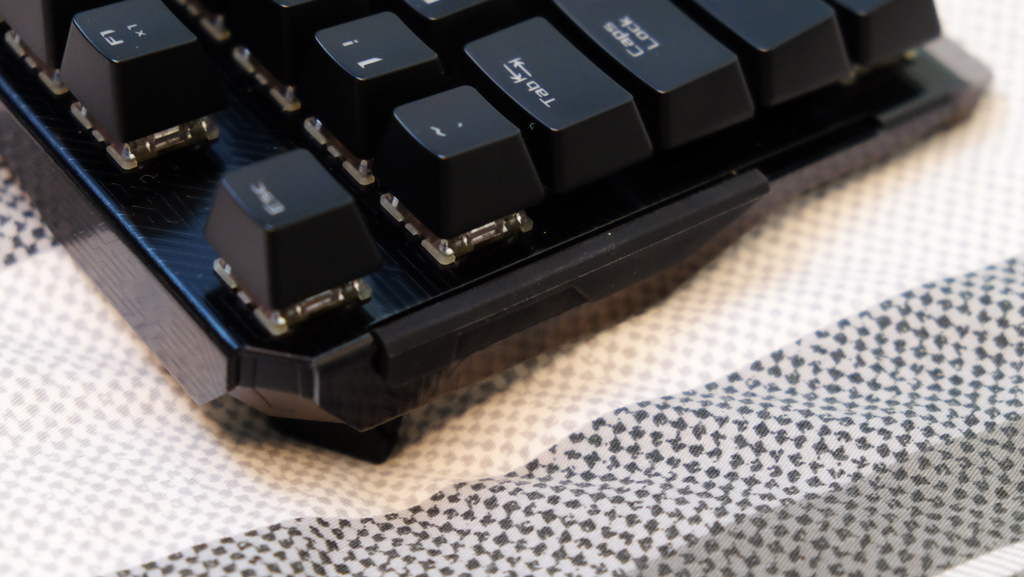 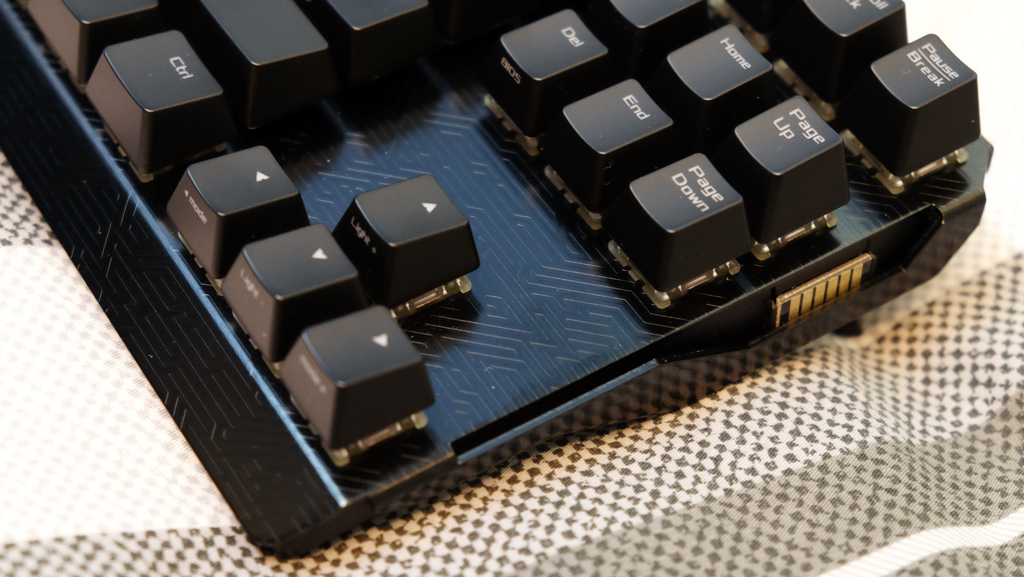 The only problem is that the interface can feel a little flimsy and even gently lifting up the edges of the number pad is enough to cause it to wobble. This doesn’t seem to affect performance, but it is a bit disturbing at times.

A large volume knob sits at the top of the number pad, making volume controls a cinch. If you remove the number pad however, you can still adjust your volume via media keys bound to the Function row.

The design of they keyboard is subtle yet striking, and like a lot of other keyboards today, it ditches the traditional baseplate and top cover design in favor of a single top plate for all the keys to sit on. This creates a floating-key effect that gives the keyboard a more minimalist look, and it’ll also make clearing out the dirt from under the keys a little easier.

The top plate itself is constructed of aluminum, which adds to the rigidity of the keyboard, but the base is mostly plastic. Overall, the keyboard feels a little on the light side, and I’d have preferred something a little more hefty, but there’s little to complain about overall in terms of build quality.

Most ROG products also feature signature Mayan-inspired bits in their designs, and you’ll notice a similar print on the top plate of the keyboard. The more exposed nature of the keys means that the Cherry MX Red RGB switches are shown off quite nicely as well, and the resulting underglow is quite appealing. There are four different levels of brightness, and you can cycle through them using the Fn key and the Up and Down arrow keys. Similarly, different lighting modes are available directly on the keyboard as well, and can be accessed using the Fn button and the Left and Right arrow keys. 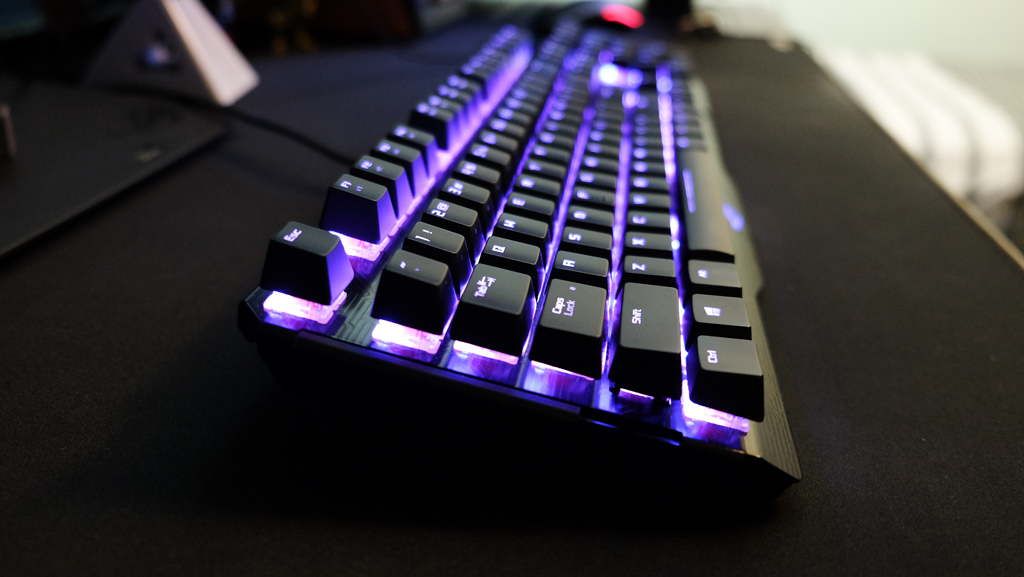 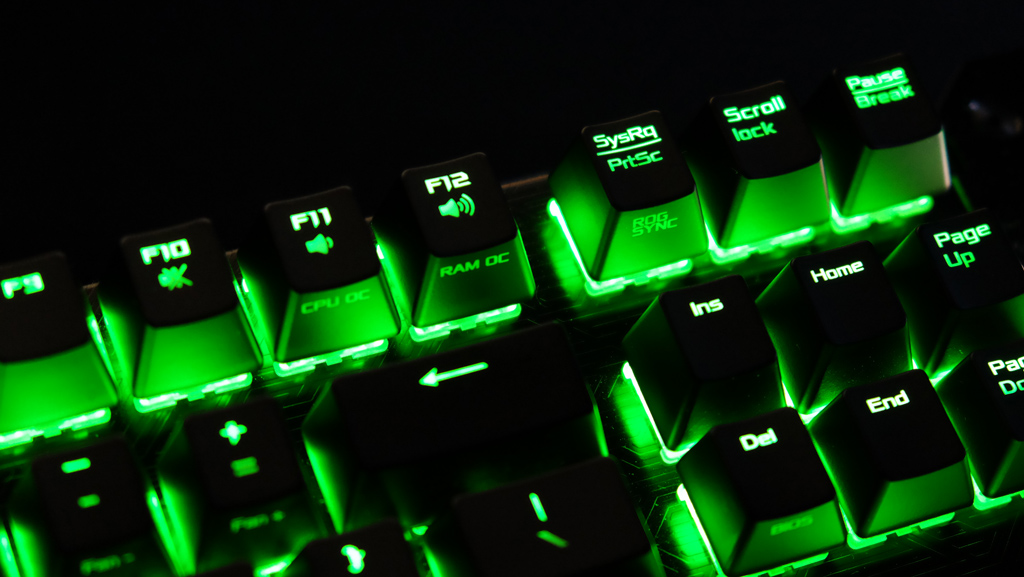 At maximum brightness, the LEDs are quite evenly lit, and the transparent housing of the MX RGB switches helps nicely with illuminating the side-printed legends, even if they aren’t as bright as the top-printed ones.

The MX Red RGB switches themselves are probably best suited to gaming, but their light 45g actuation force and linear action mean that you’ll end up bottoming out very frequently when typing. That’s not necessarily a bad thing, but those who are used to not hitting the bottom on heavier switches will need to get used to the MX Reds.

That said, one of the more interesting features of the ROG Claymore is its support for ASUS’ own Aura Sync technology. It can be paired with compatible ASUS motherboards and graphics cards with Aura RGB lighting, and the effects can be synchronized across your entire system. There’s even a dedicated ROG Sync function bound to the PrtSc key, and you can activate the syncing when the ROG Armoury software is open.

The latter utility is also where you go to customize the lighting effects on the keyboard. It supports per-key customizations, so you’ll have considerable freedom in that respect if none of the presets appeal to you. The keyboard supports up to five profiles that can be stored on the onboard memory, so you’ll keep your settings even when you use it on a different computer.

On top of that, you get on-the-fly macro recording, and that together with the buttons for brightness and mode toggling mean that you don’t necessarily have to download the ROG Armoury software if you want to keep things simple.

ASUS clearly hopes that you’ll use the ROG Claymore with the other products in its ecosystem, and there are secondary controls to adjust CPU fan speed and even one-click buttons for overclocking your CPU and RAM. If you want to boot up your PC or enter the BIOS directly from a power off state using the keyboard, that’s possible as well.

To cap things off, holding the Fn key and one of the F1 to F4 keys will let you select the repeat rate of the keyboard, which is basically the rate at which a key repeats itself when it is held down. This is similar to Zowie’s RTR technology on its Celeritas keyboard, but I don’t see many people actually making use of it.

Furthermore, while the dedicated ROG features are a nice touch for die-hard ROG fans, they can appear a bit superfluous for everyone else. In fact, you don’t even need the ROG Claymore if you want to have direct access to overclocking and the BIOS on your keyboard.

The ASUS KeyBot II software and a compatible ASUS motherboard with a KeyBot USB port is all you need to enable those features on any other keyboard. That’s the route you’ll have to take with the ROG Claymore as well, so it’s not like the keyboard makes it any more convenient.

Ultimately, it feels like ASUS could have dispensed with these features and shaved a bit off the price of the keyboard, especially considering its prohibitive S$319 price tag. At that price, the keyboard simply feels exorbitant, and it appears difficult to justify the price unless you’re a committed ROG fan (and even then, it’s a stretch). There isn’t even a USB passthrough here, when it feels like nothing should be omitted at this price.

There’s no denying that this is a great keyboard, and that’s evident in small details like the detachable braided cable. It attaches firmly to the keyboard with little give, held in place firmly by the plastic guides. But there are few must-have inclusions, and its feature set is matched by most other competitors on the market that also happen to cost less.

Would I pay S$319 for this keyboard? Probably not. What’s more, ASUS also offers the ROG Claymore Core for S$219, and that is a much more sensible choice – it’s essentially the same keyboard – if you must have an ROG keyboard but don’t need the number pad. So unless you really need the detachable number pad, there are really more reasonable options you could look at without breaking the bank.

Squee delights in trash talking on Overwatch and sleeping till 5pm on weekends. Few other things matter, except perhaps the next episode of Game of Thrones.
Previous post ViewQwest’s latest Android box does more than just TV
Next post Heroes of the Storm 2.0 is now live