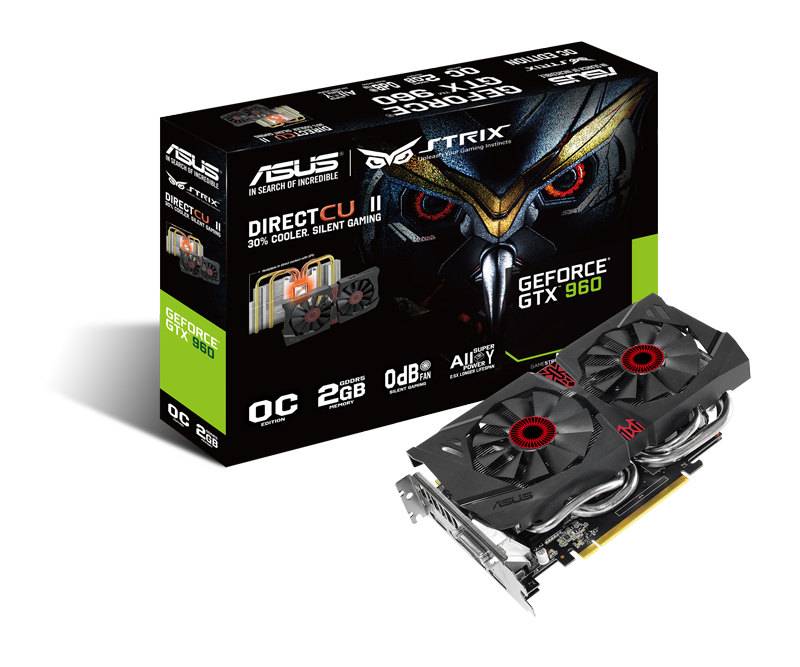 ASUS has announced the launch of their Strix GTX 960, targeted at the mid-end gamers who require a fast card without all the high-end bells and whistles that the top-tier GTX 980 and 970 cards come with. If you’re a big MOBA games (DOTA 2, League of Legends, Heroes of the Storm, etc…) player, for instance, and doesn’t want to break the bank for an overpowered card, the Strix GTX 960 may just be your answer.

The card comes packed with exclusive ASUS technologies, including DirectCU II for cooler, quieter and faster performance, and 0dB fan technology for totally-silent light gameplay. The new card also feature ASUS’ Super Alloy Power components for enhanced durability and cooling, and GPU Tweak with XSplit Gamecaster for overclocking and online streaming. Strix GTX 960 comes equipped with a DisplayPort interface to support connections up to 4K/UHD (ultra-high definition) resolution, although at this resolution you’ll need to run it in SLI-mode with another card for better performance.

The Strix GTX 960 is based on NVIDIA’s newer GM206 core, and promises 1080p gaming at the gold standard of 60 fps. That won’t be in every game and with every detail slider turned up to maximum, of course, but for the price of S$369 (and comes with a free ASUS gaming mousepad) it’s a deal. And while 1080p gaming may sound pedestrian in a world of curved monitors and 4K displays, it’s actually where the sweet spot is. In fact, NVIDIA says 95 percent of games are played at 1080p or lower, and cards like this ASUS Strix GTX 960 is for them.

Aaron Yip is an industry veteran with more than 15 years of experience. When not spending time on his gaming PC and consoles, he can be found in Hyrule solving ungodly puzzles and collecting gems.
Previous post App Assessment: Chain Chronicle (Android)
Next post Heroes of Might and Magic III – HD Edition Out This Week