Home / E-Sports / aL EventPotion Qualify For Sao Paulo, But How Are They Getting There?

aL EventPotion Qualify For Sao Paulo, But How Are They Getting There? 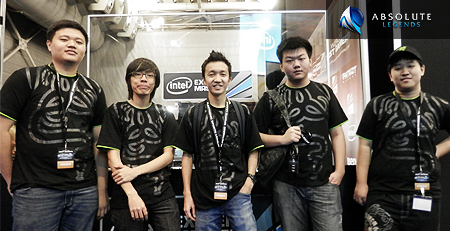 ‘Our team qualified for IEM Sao Paolo. We want to ask for help to get there.’

This was the message that greeted me on our Facebook page two nights ago. Local team Absolute Legends Eventpotion (aL EventPotion) has made it past the Singapore and Malaysian League of Legends Intel Extreme Masters qualifiers to earn themselves a spot at Intel Extreme Masters Sao Paulo, Brazil. The problem is, they can’t get there.

Absolute Legends is still considering lending financial support to their Southeast Asian team. While the e-Sports organisation does have enough funding, EventPotion themselves feel that Absolute Legends would be taking a huge risk by sending their recently acquired team to IEM Sao Paulo. While aL EventPotion has consistently placed top three in Singapore-based tournaments it has been taking part in, IEM Sao Paulo will be their first overseas LAN competition.

“The situation will be more optimistic if we manage to raise funds on our own,” Nelson said, explaining that US$8,000 would not be a small sum for a medium-sized e-Sports outfit like Absolute Legends.

So EventPotion are not resting on their laurels. Nelson, who is currently a full-time student, told me the team had already approached SCOGA, a Singaporean non-profit organisation that doles out financial aid and (to some extent) governmental support to gamers. He also mentioned having sent a presentation to Razer. Absolute Legends has Razer onboard as a team sponsor, but it’s possible that the same support their North American and European contingents enjoy will not extend to Southeast Asia, since different regions have different budgets and key performance indicators.

“We’re planning to go to Reddit as a last resort, with me asking some of the more famous people in the NA and EU [League of Legends] scene to help us, and ask for donations. But that’s a pretty long shot,” Nelson said. Reddit has apparently served as a successful vehicle for monetary contributions to bigger League of Legends teams.

However EventPotion is nothing near the likes of teams CLG.EU and C9. According to Nelson, the team was formed only in March 2012. It went through a one-player change in its roster before settling on a team comprised of players Martin Lew (mexi), Wayne Chua (BBTY), John Dinh (ReS), Chun Wai Wong (Cwcwcw), and Yu Hong Liang (Apet). Absolute Legends picked the 5-man team up shortly before IEM Singapore kicked off last year. To date, Nelson names EventPotion’s proudest local achievements – apart from their IEM qualifier win – as winning first place at League of Legends competitions organised by the Singapore Institute of Management and the Singapore Management University. “The top [local] teams were all playing there,” he explained.

To cut a long story short, it’s likely that aL EventPotion’s best bet for financial aid will be SCOGA – Singapore’s Cybersports and Online Gaming Association – and their Gamer Assistance Programme (GAP). Even then, the GAP fund has a rigourous application process, and a grant from it might not make EventPotion’s one month deadline even when expedited. Gamers requiring aid have to go through the extremely thorough application form individually, with no convenient concession made for teams applying together. There is also no guarantee that the entire team will receive the funding they request. On top of that, the non-profit SCOGA is also staffed by volunteers, and operates more slowly than a profitable organisation would.

It’ll be nice to see our local boys take the stage all the way in Brazil, a country more than a 24 hours plane ride away. But with IEM Sao Paulo just one week away, it’s hard to say if they’ll be able to raise the funds to get there or not.