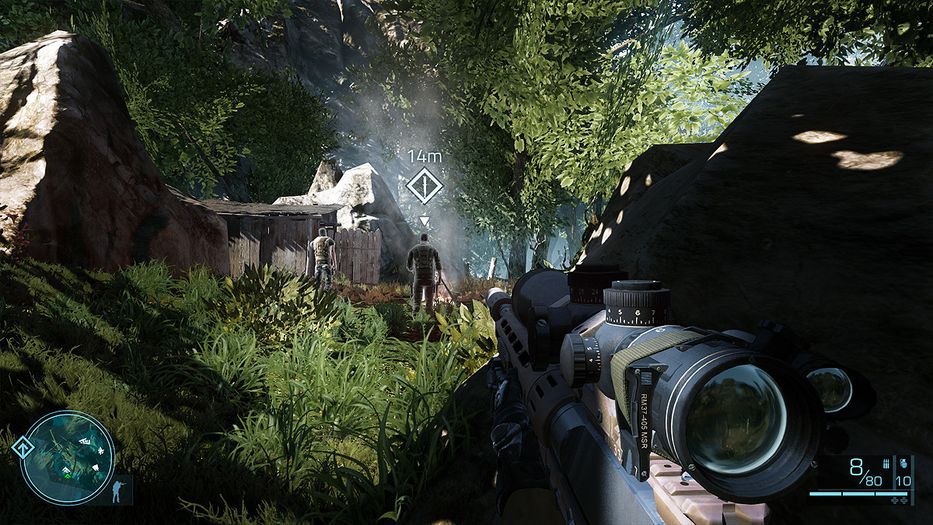 Being a sniper isn’t all acting stealthy and taking out your targets in the tight order in order not to expose your actions… Well, actually that’s about it.

Enter the life of a military sniper in Sniper: Ghost Warrior 2. The second in the series takes on more real-world locations around 3 acts. You play as Captain Cole Anderson as he takes on missions in the Philippines, Sarajevo and Tibet.

The game boasts itself as a true sniper experience, and it doesn’t lie in that department. Everything that affects the survival of a sniper is built into the game. Wind factors, breathing control and sniping position all affect the outcome of each shot you take.

Sniper: Ghost Warrior 2 emphasises on stealth, so staying out of sight is key. How soon you get spotted is indicated by a handy orange circle that grows around your radar map, pointing towards the direction of whoever has spotted you.

The game first drops you in a lush, forest area so taking cover and slithering in thick well-rendered bushes keeps you out of sight. Other points of the game have you ducking behind crumbled war-torn structures.

This game pretty much shows you how defenceless you are as a sniper since you mainly follow the calls of your spotter on which target most optimal to take out first. Some sections leaves you with no spotter to tag your targets for you, so you can use what you’ve learned and take over. The higher difficulties have less of these prompts and no scope guide for you when the wind is blustering.

Plus, you don’t really have a whole lot of weapons to go for, and you can’t pick up a proper automatic weapon to defend yourself. Being a sniper, the best you have are the rifles dropped by other fallen snipers you picked out, but getting to those are largely a hassle and offer no real benefit since they are usually perched several meters away and up from you.

These little quirks make up the bulk of the frustrations in the game, though without them, the game would be too easy and render its purpose useless. Should everything go nuts, you remain a sitting duck with just your sniper rifle and silenced pistol, with the former useless at close-range with the scrambling enemies programmed intelligent enough to come running towards you with machine guns blazing, effortlessly taking you out.

But when you’re doing good, you’ll find yourself shooting enemies without effort, sometimes netting two or three sentries in a single, well-timed shot along the way. Other occasions have you shooting out radios to distract guards or popping a grenade precariously hung on a target’s waist. These moments puts you in a more exhilarating mood to carry on. Bullets can also go through feeble materials like woodboards and glass, so you’ll have no problem taking your shot should a grunt enter a wooden hut. As with videogames like these, there’s an objective to fulfil and the ensuing story that wraps around it. I won’t spoil what little can be left to the imagination, but it lies upon betrayal and a flashback to your previous flop of a mission in Sarajevo. Don’t expect an ending that’s over-the-top, though. You’re just a sniper with a grudge to bear whose events take place in the real world.

One thing that will be easily brushed aside like the thickets you slug through is the amount of detail in the graphics, which you’ll mainly enjoy from the scope of your rifle. Going the linear path the game takes you will likely distract you from the sensation of a deserted beach resort, a war-torn city or a Tibetan temple. The game surprisingly has 4 secrets tucked away on each act, so there’s that method of exploration.

Otherwise, this game could just as easily be another free Flash game you find online, though it has to be really good for a Flash game. Sniper: Ghost Warrior 2 has its merits, and fans of a sniper-only action game should enjoy this, but stealth-wise, it’s content won’t be on as high a reach as Deus Ex: Human Revolution or Metal Gear Solid 4.

Sniper: Ghost Warrior 2 is a City Interactive Games stealth shooter game for the Xbox 360, as well as the PlayStation 3 and Windows PC.