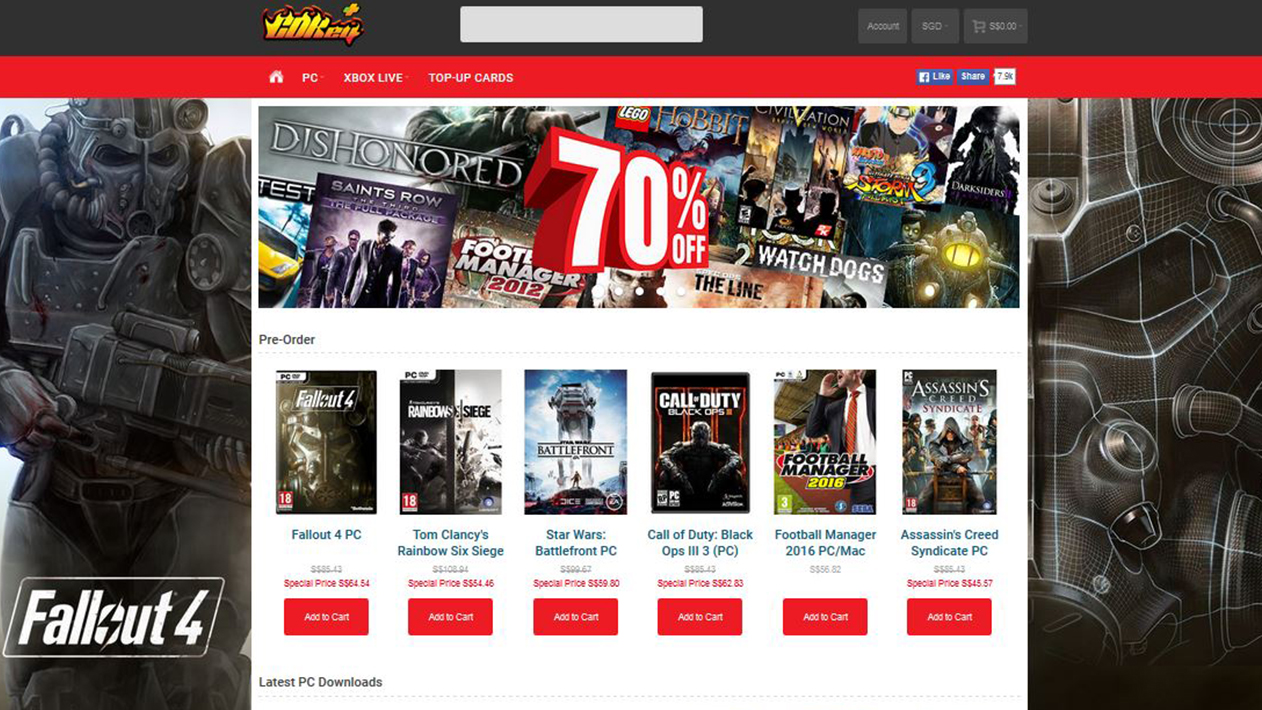 The PC gaming community has, for the most part, embraced digital storefronts for their convenience and attractive prices. Rising to serve the local market is CDkeyplus.com, an e-commerce site by Singaporean company Digital Plus. Officially launched today, their catalog consists over 60 of the latest titles, with plans to increase that number to 250–300 by mid-2016.

New releases such as Call of Duty: Black Ops 3 and StarCraft II: Legacy of the Void will go for roughly 20% cheaper than retail. For example, Bethesda Game Studios’ Fallout 4 — one of the year’s most anticipated titles and released only yesterday — can be purchased for $63.39 instead of the usual $79.

Naturally, the discounts grow even larger when it comes to older games. Football Manager 2015 is available for just $13.99 (71% off) while Mortal Kombat X Premium Edition is listed at $23.77 (72%). One could also pick up subscription cards for Xbox Live, with more to come in the future.

Andrew Li, Chief Marketing Officer of Digital Plus, stated in a press release that the company is confident they can offer the lowest prices for brand new games here.

If consumers can find any game that we are selling cheaper elsewhere at retail or online shops in Singapore, we will refund the difference upon proof of purchase.

Digital codes purchased from CDkeyplus.com, sourced via overseas channels, are redeemable at leading platforms such as Steam and Origin. At the moment only PayPal is accepted for payments, though the company does plan to explore alternatives such as game cards and other online options.

“We want to make sure that all gamers of all ages in Asia will be able to pay for these games using a variety of methods,” added Mr Li.

And it’s the younger audience that Digital Plus wants to lower costs for, as steadily rising prices are making the next-generation turn to free-to-play and mobile alternatives instead; missing out on great PC games simply due to high prices isn’t an idea that sits well with the company.

There are of course a number of sites that savvy and cost-conscious gamers already visit for launch discounts. From licensed resellers such as Green Man Gaming and Humble Bundle to gray markets like Kinguin and G2A, there are no shortage of options for anyone looking to save some money. Even Steam has launch discounts, although they’re mostly restricted to indie titles at the moment.

Digital Plus plans to expand to Malaysia by the end of the year and to launch in other Asian countries in the next. Here’s the link to CDkeyplus.com once again — just take note of any region restrictions before purchasing.

Editor’s Note:
To celebrate the launch of the site, Digital Plus will be giving us 5 tokens to give away, The specific game title will be announced on our Facebook Page, so watch out for it there!

Ade thinks there's nothing quite like a good game and a snug headcrab. He grew up with HIDEO KOJIMA's Metal Gear Solid, lives for RPGs, and is waiting for light guns to make their comeback.
Previous post EL Gaming victorious at WGL Pacific Rumble
Next post Singapore Makes Its Mark in Humble Bundle