Home / Breaking News / TGS 2018: Focus On You is a new dating adventure game for the PlayStation VR

TGS 2018: Focus On You is a new dating adventure game for the PlayStation VR

Watch out, Bandai Namco. There’s a new VR romance game (of sort) to rival your Summer Lesson from last year. At a Sony Interactive Entertainment media session earlier, South Korea’s Smilegate Entertainment announced a VR dating adventure, Focus On You, for the PlayStation VR next Spring. 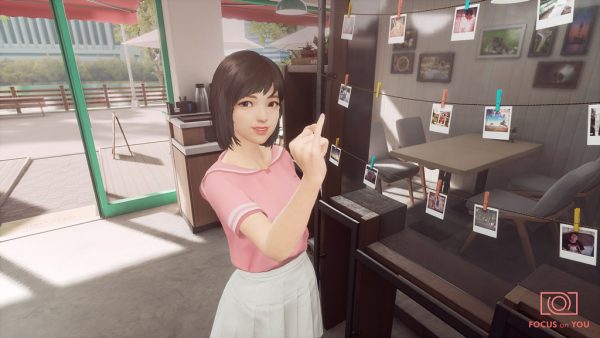 The star of the game is a Korean 3rd-grade high school photography major, Song Ah-Young, who apparently loves strawberries, K-pop and you, according to Smilegate. At the heart of the game is a romance story and is supposed to recall one’s “emotional first love” – so I’d imagine there will be petty tiffs and trivial misunderstandings that you and Ah-Young must content with each other. According to Smilegate, conversations will be “emotions-related”; perhaps a multiple-choice format where your choice of answers reflect sadness, happiness, anger and so on. The story progresses by engaging in conversations or a picture by voice. Photo-taking is also a key feature of the game, and they can be viewed in the gallery.

On the development side, Smilegate has engaged a real-life idol actress for motion-capture acting – right down to her expression. The publisher is mum about the actress’ identity for now. At launch, Focus On You will have six chapters including the prologue. Post-release will see additional episodes and costumes/hairstyles launched as DLCs.

We’ll share more information of the game nearer to the game launch.

Aaron Yip is an industry veteran with more than 15 years of experience. When not spending time on his gaming PC and consoles, he can be found in Hyrule solving ungodly puzzles and collecting gems.
Previous post Gaming Matters 2018 – Interview with Kevin Lin, Co-founder of Twitch
Next post TGS 2018: Capcom removes Dante’s Devil May Cry 5 theme song after singer’s history is exposed