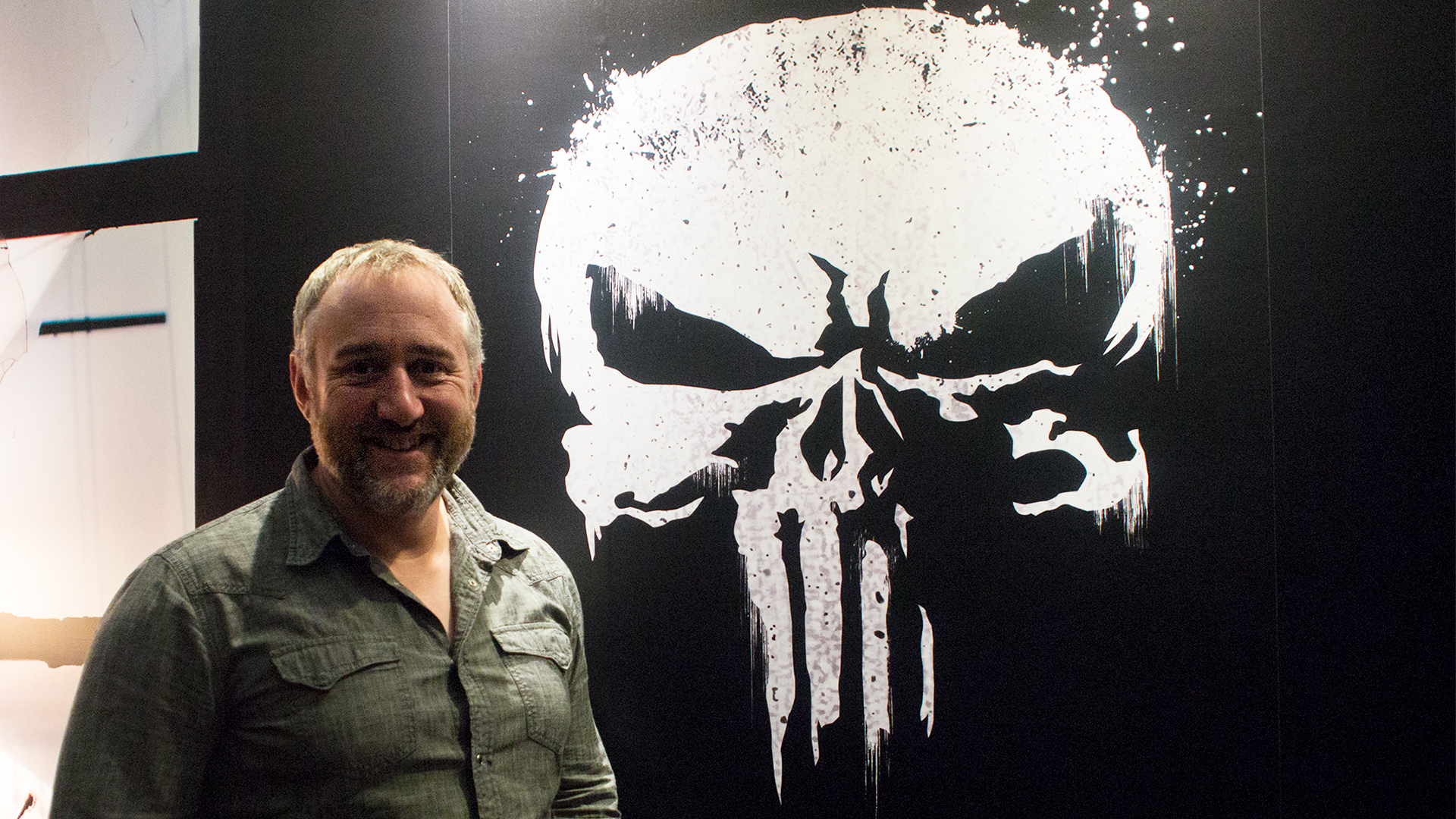 After a disappointing run with Iron Fist, Netflix’s Marvel arm is back with a vengeance in the form of The Punisher. The anti-hero’s debut in Daredevil season 2 (2016) portrayed a deeply haunted character, one coping with extreme grief and loss in the only way he knew how. While things appeared to wrap up at the season’s conclusion, things are never as they seem in the Marvel universe. With an entire season to himself, Punisher seeks to poke and prod at Frank Castle’s inner turmoil, all the while peeling back the layers of conspiracy behind his family’s massacre.

Leading the charge is British showrunner Steve Lightfoot, a high-profile producer and writer who is best known for NBC’s Hannibal (2013). His professed love for Westerns make him a perfect fit for the star vigilante, though there’s certainly going to be more here than just dead bodies and smoking guns. We caught up with him to get some brief thoughts on the show and production.

With Frank Castle a returning war veteran, is PTSD something you’re looking to explore in The Punisher?

Steve Lightfoot: I think it’s a factor. I mean, at the end of the day the show is meant to be entertainment with a fictional story. I think you can touch on those things without, you know, it’s not a driving force in the show. We never explicitly state it, but you could say that everything that is happening to Frank is driven by that. We never explicitly state in the show that Frank has PTSD because that’s not what we’re here to do, but I do think that certainly is a factor for soldiers coming back. It’s in the background of the show.

Coming on as showrunner, did you have any prior experience with the IP?

I’ve seen all the movies, starting with the Dolph Lundgren version (The Punisher, 1989) when I was a kid – I must have been 14. I remember seeing them all and a couple of issues of the comics, but I had to go back and immerse myself in the books again and sort of went and read all the books once I was involved in the show.

Did Marvel have any directive from above with regards to where you were taking the series?

It certainly wasn’t a case where they said, ‘Oh we want to do this story from this set of books.’ I think they have done that with some of the other series – I don’t know that material well. But no, they very much were happy for a story that’s original. We have homages to certain issues and things that happen in the books, but they didn’t say, ‘Oh you must do this story.’

You mentioned that you took ‘70s Western movies as a source of inspiration. What similarities would you say are there in the show, aside from the whole anti-hero angle?

It was just that very gritty, hard-boiled ‘70s vibe and I feel like the world’s in a sort of similar place. There’s lots of upheaval and turmoil, and I think shows, movies, and books always sort of reflect their times. It felt natural to go back to those, and also I just love the style of those movies back then, whether it’s Clint Eastwood’s Westerns or things like Point Blank (1967).

So how was it getting to shoot on-location in New York?

I loved it! I’ve only ever been to New York as a tourist before, so it was great to go and spend a lot of time there and being around it. It’s just such a cinematic city; you’re always in places you feel like you’ve been before, and then you realize: ‘Actually, I’ve just seen it in a bunch of movies.’

So, the diner in Episode 2 is actually now known as the ‘Goodfellas Diner’ because it’s where they shot the diner scenes back in the ‘90s. It was kind of great being able to soak New York up, and the crew and everyone working there are excellent. So often now you film in a place and pretend it’s somewhere else…if you want the Statue of Liberty or the Empire State Building in every shot, you can do it.

Do you have any notable moments working with the cast?

Oh, they were great, they’re really good actors. We already have Jon [Bernthal], obviously, and he was fantastic in the part — he’s such a great collaborative partner to work with. And then everyone else, you know, we cast the best person in the audition. They all did brilliantly in the show and it was a pretty happy experience.

Netflix has changed the industry in that we can now watch an entire season back-to-back. How would you say that has changed discussions around TV shows?

This is going to be my first one out there so, in a way, I’m about to find out. I think when you have a show on Netflix it’s a bit more like releasing a movie, so much of the conversations are about that first weekend.

What’s kind of interesting is that you’re going to get feedback on the whole season at once, which I’m excited about. I hope people like it.

Thank you for your time.

Catch all 13 episodes of The Punisher on Netflix, available now.

Ade thinks there's nothing quite like a good game and a snug headcrab. He grew up with HIDEO KOJIMA's Metal Gear Solid, lives for RPGs, and is waiting for light guns to make their comeback.
Previous post A Gamer’s Encounters at C3 Anime Festival Asia Singapore 2017
Next post In Photos: Legoland MY’s The Great Lego Race VR Coaster