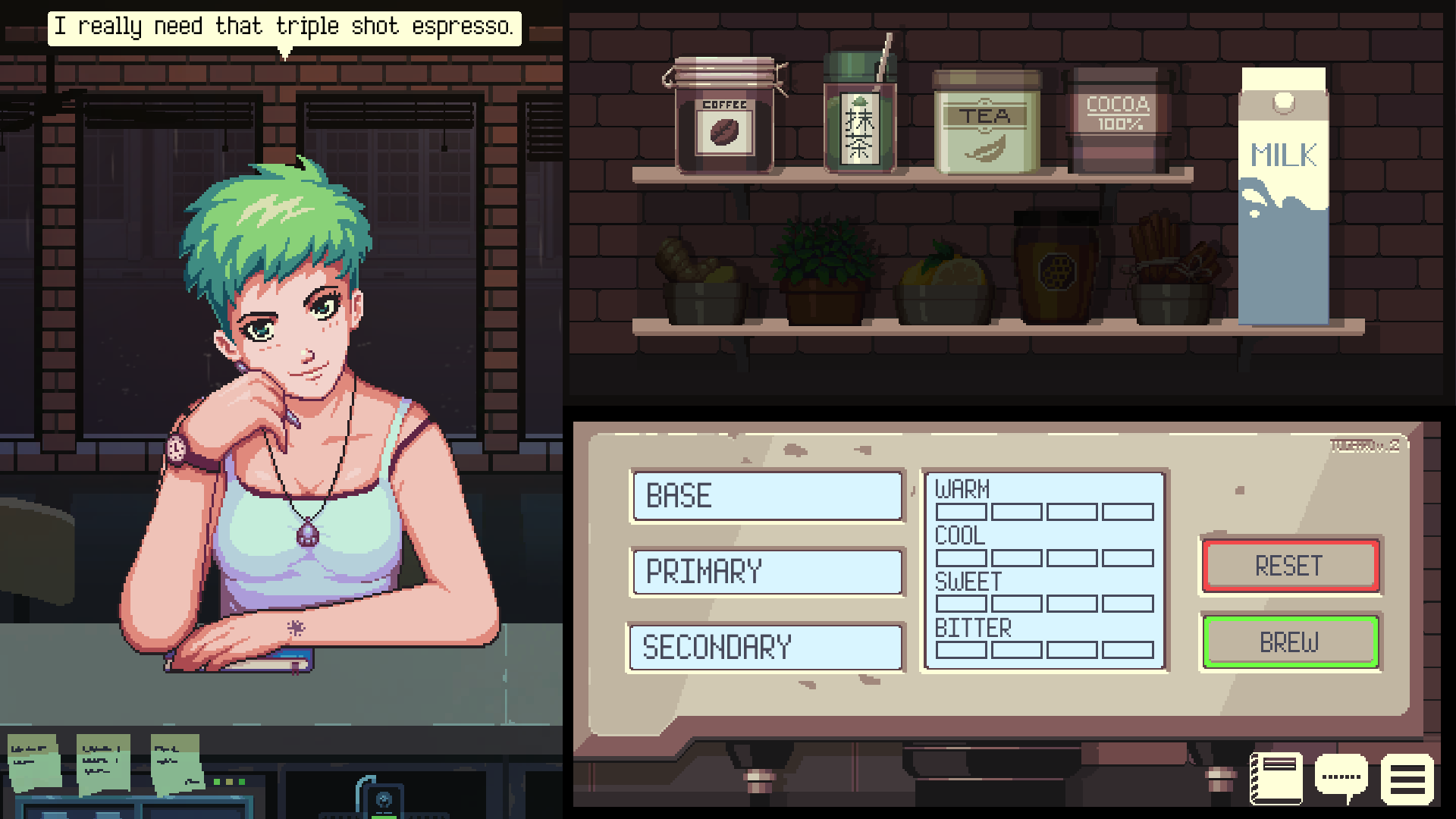 The cool chill of a rainy night, warmed by a steaming cup of coffee and the close company of friends. An atmosphere easily imagined, yet difficult to capture. It was an enchantment that Mohammad Fahmi Hasni wanted to bring to games, and the genesis for what is to become Coffee Talk.

Best described as a visual novel, Coffee Talk serves up bite-sized stories wrapped in retro colors and a damnably soothing lo-fi soundtrack. A journalist anxious about chasing her dreams, a couple facing familial opposition — stories we’ve all heard before, but with just the right amount of flavor and authenticity to keep us reading. We view it all from behind the barista’s counter, serving up triple-shot espressos and milk coffees to the cafe’s late-night clientele.

I sorely wanted to see more, and as it turns out others did too. Coffee Talk claimed the Best Storytelling trophy at the SEA Game Awards 2018, and I was lucky enough to run into one of the minds behind the game at the larger Level Up KL 2018 event. 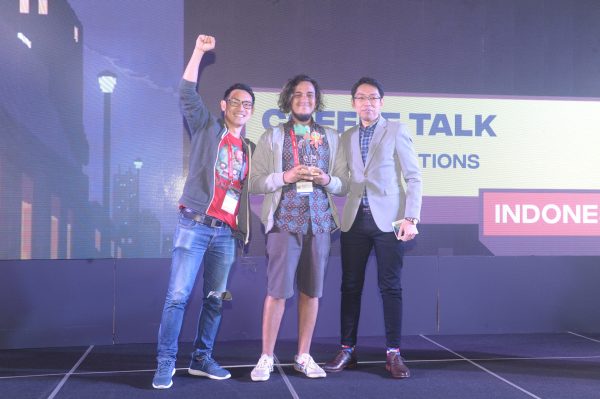 Fahmi is the marketing and PR manager for Toge Productions, a rising star in Indonesian gaming. Yet that’s just the title on his business card, as with any indie developer he has no shortage of roles to juggle.

In Coffee Talk‘s case he’s also the writer and game designer. The prototype may have been born from one of Toge’s game jams but the idea started much earlier. Fahmi was out smoking on a cold rainy night, feeling the breeze and chatting with friends, when he idly wondered how he could translate ‘that moment’ to videogames. Vocalizing the idea, he was surprised to learn that something similar already exists: Sukeban Games’ excellent VA-11 HALL-A (pronounced ‘Valhalla’). With the community being as small and connected as it is, he approached Valhalla publisher Ysbyrd Games and got to meet Sukeban themselves, who then eased Fahmi’s game design fears. There’s a whole devlog on it for anybody interested.

They say the best kind of stories are the ones you can relate to, and so Fahmi turned to friend interviews and his own personal experiences to craft them: parenting, professional life, romance, anything that could give players a hook to latch onto. It’s also why he went with a cafe, as Fahmi doesn’t drink and wouldn’t know what bar culture is like. 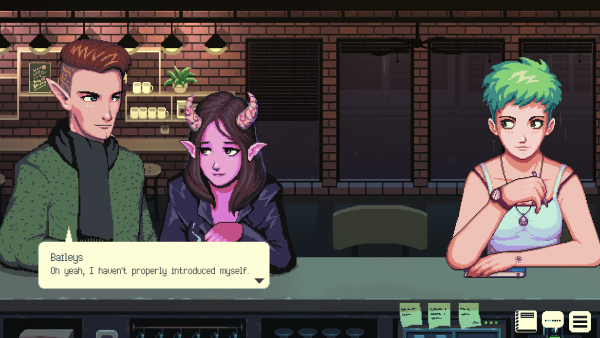 So why the urban fantasy characters? Because he still wanted to break people’s expectations, and a succubus climbing the corporate ladder isn’t exactly something most run into. Don’t expect to find anything sci-fi or mythological though, as he says the cast will still be largely Tolkien.

Like most his age Fahmi counts anime and manga among his many influences, naming well regarded classics such as Cowboy Bepop, Neon Genesis Evangelion, and other ’90s classics as visual inspirations, including adventure games. The pixel art was simply down to Toge having built a reputation for it, which fortuitously matched his desire for a colorful palette.

To nail the atmosphere, Valhalla proved an obvious study but so too were Japanese content such as the manga Bartender, the movie Our Little Sister (Umimachi Diary), and the Netflix TV series Midnight Diner. Its easy to see the similarities if you’re familiar with them, and recreating this sense of community intimacy does seem within reach for Coffee Talk. 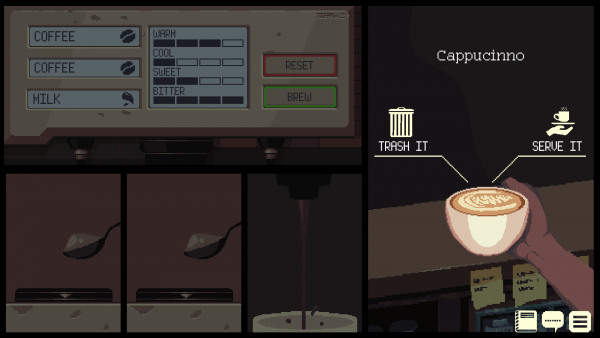 We got confirmation that the brewing mini-games are where the story branches out (they’re aiming for  14 in-game days), and that a path diagram will be available to make things clearer. And since those sections have been somewhat popular, maybe even a little meditative, there are plans to implement an endless coffee making mode.

Fahmi reports the game’s assets are almost complete, and that the bulk of the remaining work comes down to the writing — firmly his territory, making him the butt of any delays-related jokes. “Sometimes, just sometimes, I work well under pressure. So, not being able to chill might actually help me finish this game that, ironically, is all about chill,” he later wrote in an email.

Coffee Talk releases for PC, Nintendo Switch, and iOS in Q2 2019. In the meantime, check out the public demo for yourself over on Steam.

Disclosure: GameAxis was an invited guest for Level Up KL 2018 and a juror for the SEA Game Awards 2018. The writer presented the Best Storytelling trophy to Coffee Talk.

Ade thinks there's nothing quite like a good game and a snug headcrab. He grew up with HIDEO KOJIMA's Metal Gear Solid, lives for RPGs, and is waiting for light guns to make their comeback.
Previous post Invictus Gaming dominates Fnatic 3-0 to win 2018 LoL World Championship
Next post Review – Breaking the mold with Thronebreaker: The Witcher Tales