Review – Go behind the scope once more with Hitman: Sniper Assassin 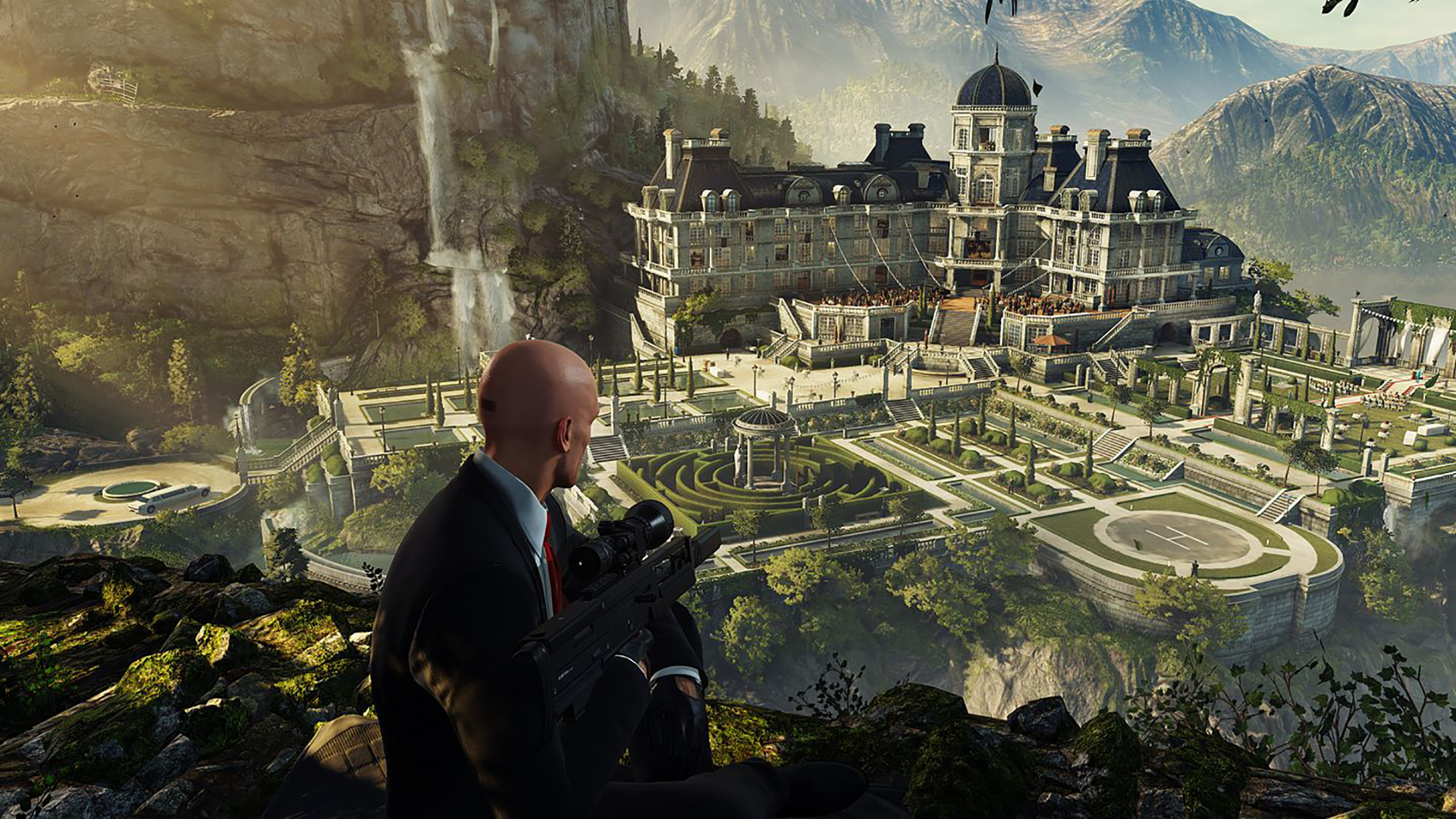 Hitman: Sniper Assassin came out of nowhere.  It wasn’t teased, it wasn’t previewed, there was no hint that it even existed. Rather apt for a game about killing quietly, though the only way to play it right now is if you pre-order the upcoming Hitman 2 (not the older Hitman 2: Silent Assassin).

Like Hitman: Sniper before it, Sniper Assassin is a trimmed down mission where you, as Agent 47, take out targets from afar with a silenced rifle. This time the setting is a humongous villa by the sea, with your stationary perch set up on a hill overlooking the place.

Your mission is to take down three main targets and their bodyguards. It still counts as a success if the guards escape, but if any primary target manages to flee then it’s an instant game over. These targets move around the mansion and mingle with guests (one even attends his daughter’s wedding), generally acting like living, breathing people. Hitman’s level design is one of the best parts of the series and it’s great to see that Sniper Assassin carries on the legacy. It’s in a much more restrictive fashion here, but the level is still nicely done and varied with a hedge maze, fountains, and a helipad underneath the towering main house.

It’s immense fun at first: staking out each target, finding out what they’re up, and planning your next move. Should you go the direct route and shoot them? Or perhaps make it look like an explosion or some other accident? Part of the fun is in the experimenting, to see just what you can get away with. Of course, skillful play is encouraged and rewarded. With careful timing, you can make it so that the bodies of your victims fall out of sight and into a body of water or some bushes. This is imperative if you’re aiming for the ‘Silent Assassin’ ranking bonus. Yet, there’s definitely a rush when you’re shooting on the fly, having bodies discovered and making all hell break loose. Taking aim at a fleeing target is much more challenging, and there’s a special kind of satisfaction in watching a compensated shot nailing them as they escape. However, repeated tries show the ugly side to Hitman: Sniper Assassin – nothing changes. After a while, you’ll memorize who will be doing what, where, when, and with whom, making the mission a robotic process of getting the highest score possible. There are multiple challenges you can attempt to boost your score but they’re nowhere near enough to offset the repetitive nature of killing the same targets at the same places over and over again, which is what you have to do if you’re shooting for records.

Repeated playthroughs do net you points that improve rifle mastery, though these are negligible benefits like a faster rate of fire and extra special ammo. They’re fun to have, certainly, but it doesn’t make for much gameplay evolution from when you were new. The biggest change to these sniping mini-games is the addition of co-op, so you and a buddy can tag team for some coordinated kills. This mode replaces Agent 47 with two new characters, Knight and Stone… and that’s about it. You still get the same level design, the same enemy placements, the same patrol routes, and the same objectives.  Like the solo experience, it gets boring after a handful of plays.

Playing on the PlayStation 4 Pro gives players the option of a stable 30 FPS or an unlocked frame rate. The unlocked option definitely saw frame rates going above 30, though it does have noticeable drops when there’s a ton happening on-screen, like explosions taking out a crowd of people, for example.

As a pre-order bonus, one does wonder: are there any benefits that carries over to Hitman 2 at launch? Sadly, the answer remains to be seen. There’s no word on whether you’ll get to bring over your rifle mastery level or get any extra in-game stuff, either. While Hitman: Sniper Assassin is fun, it doesn’t have the legs to keep most people coming back to it after a couple of days. At least it’ll help make the wait for the actual, full game a little easier.

Hitman: Sniper Assassin is available on PC, PlayStation 4, and Xbox One.
The game is a pre-order bonus for Hitman 2, which launches on 13 Nov. 2018
Developed by IO Interactive. Published by Warner Bros. Interactive Entertainment.
A PS4 digital copy was provided for review.

Sal's just your average hardcore gamer. He started gaming on the NES in the 80s and has been ever playing since. Sal doesn't care about which platforms games are on, only that he wants to play them all!
Previous post Jump (back) into World of Warcraft for free this weekend
Next post Sony bundles 12-mth PlayStation Plus with 3-mth Netflix