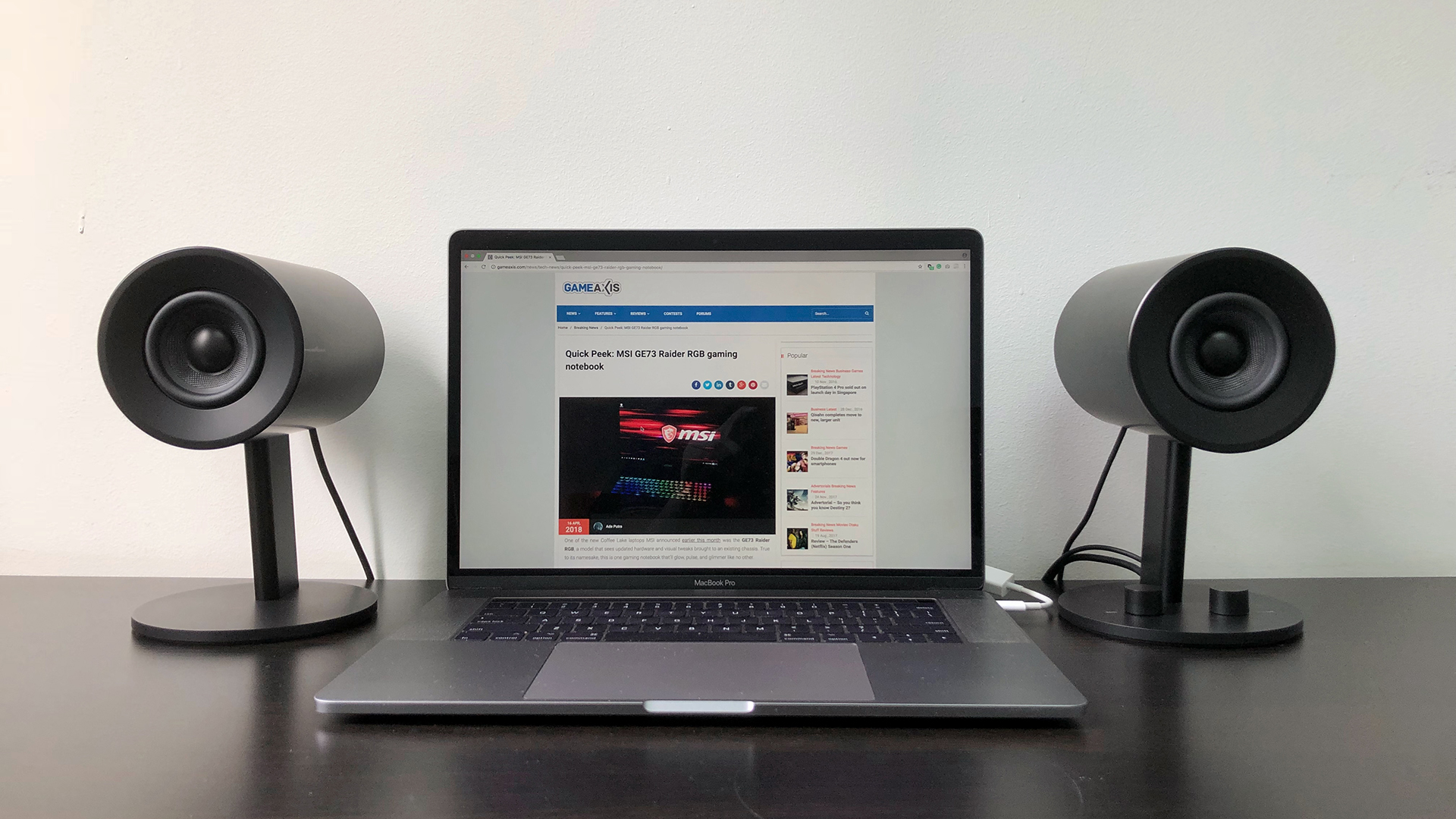 If the Razer Blade and Razer Phone are anything to go by, then it won’t come as a surprise to see that Razer has adopted a similar approach for the Nommo Chroma. You get your pick of colors so as long as it’s black, and there’s that minimalist look that makes it kosher for those who aren’t inclined towards the “edgy” (read: very loud) gaming look. Much like how non-gamers can see themselves using a Razer Blade as a regular laptop, likewise you’ll find that the Nommo are speakers that can be used in a non-gaming setting. And yet, one look from a discerning eye and it’s unmistakably clear that this is a Razer product; and that’s even before considering its signature lighting tricks and effects.

Unlike traditional, boxy bookshelf speakers, the Nommo Chroma is only as big as it should be. The stand is only as wide as it should be to be stable; the post is only as large as it should be to support the speaker’s weight; and the cylindrical speaker is not much wider than the speaker cone it contains. The power adapter is incorporated into the mains plug, so there’s no cumbersome power brick to deal with. The wires connecting the two speakers, however, might well be a little long for most, so some cable management is required. The upside, of course, is that it’s better for the cable to be far too long than far too short. They’ve placed one 3.5mm headphones jack as well as an aux-in jack on the rear of the speaker, which is also where you attach the power cable. The Nommo Chroma also sports a USB cable too, which you can use instead of the aux-in to link to your input source.

In line with the minimalist theme, the speakers are designed to plug-and-play. If you need further customization you have some Synapse 3.0. Otherwise, two dials control the bass and volume, the latter of which doubles up as a power button that you push to switch on and off. A light underneath the stand turns on to indicate that the speakers are on, and turns off when – err, you know the drill. Although the dials are digital, the stepping is smooth so volume swells and bass adjustments aren’t jerky. The LED lights double up as an indicator to show the level of volume and bass selected; the left speaker shows the bass levels while the right speaker shows volume. It’s a pretty elegant and visual way to see what adjustments you’ve made, even out of the corner of your eye. 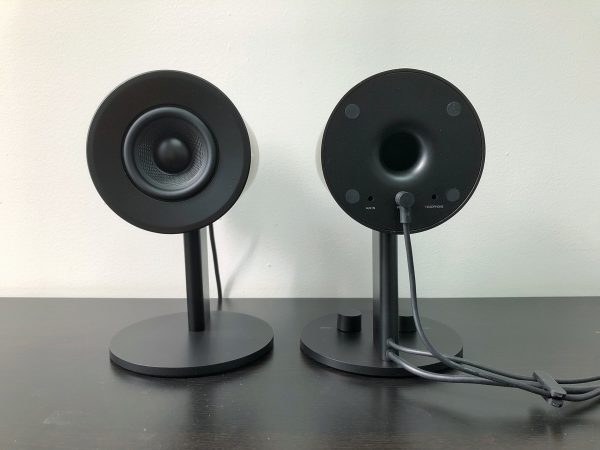 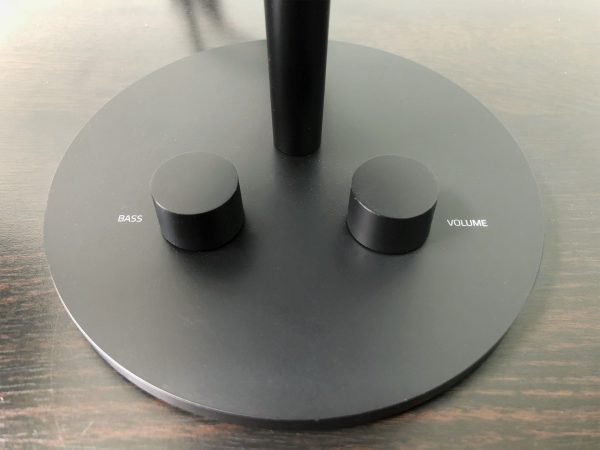 Considering how clean it looks, the Nommo Chroma is actually quite an elegant solution for simple rigs that don’t take up too much space. There is one trade-off with this design: these speakers sound their best only when your ears are directly in line with the speaker cones. Desktop speakers tend to be angled upwards (say, 18 degrees) for this reason. But unfortunately, therein lies the problem – unless you sit in your chair like how Jenkins the Griefer does, you won’t get the best possible representation of what the Nommo can do. It’s not to say that the speakers don’t sound good, it’s just that they might sound slightly squashed. You can fix that if you place them on a monitor stand, but it seems like an extra purchase that you don’t necessarily need.

So how does it sound? There’s actually two parts to this answer. With the Nommo Chroma, you can either use the built-in DAC or the aux-in as the source. The obvious choice is that you should use the USB connection for the best possible experience, no? Well yes, and, no.

With the USB connection, the Nommo handles most genres of music, as well as environmentally engaging games like PUBG well, but it’s also not the best representation of what the speakers can do. The built-in DAC is a limiting factor, especially when it comes to music. I really am nit-picking here, but the separation could be better, and there’s a slight hint of brittleness in places. If you’re primarily gaming then I don’t really see any issues, and to be fair, these are primarily gaming speakers that do their job very well. You get a good sense of where you are in a virtual space, and the bass is strong enough to give you that chest-pumping thump. 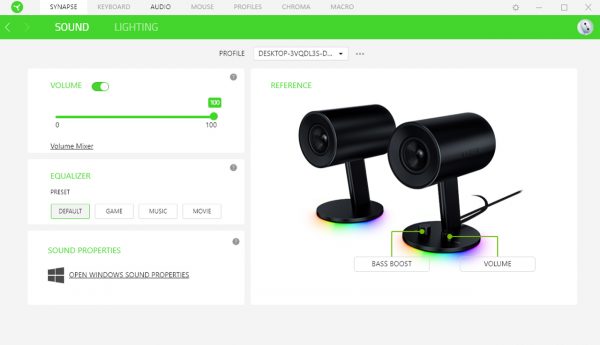 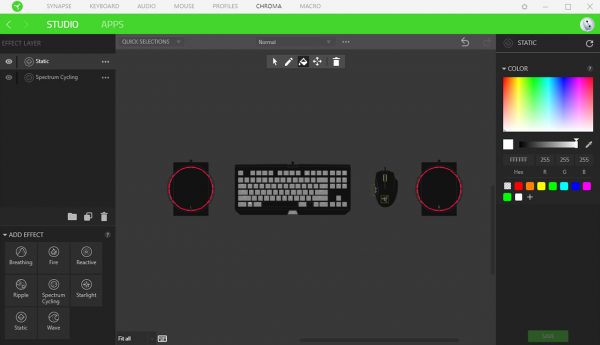 You can improve things sound-wise if you use a good source and the aux-in input instead of taking the USB route. A competent DAC, amplifier, or sound card will give you a far fuller sound that is also authoritative in the higher frequencies, letting the speakers truly come alive. However, that would mean having one extra cable to deal with.

Likewise, while it’s a nice touch to have a headphone jack built-in, rather power-hungry headphones like the Sennheiser HD 650 can’t really take advantage of it as the built-in amplifier isn’t powerful enough – even the headphone amp on a laptop like the MacBook is more powerful. Most gaming headphones should be fine, though. It would have been nice if Razer added a Bluetooth component so that you could play music off your phone, but I can understand that this would have complicated the user experience.

As these speakers were designed to support Razer Synapse 3.0, the lights will sync with your keyboard and mouse and is compatible with all of the lighting effects. The lights are on the subtle side, so that may be good or bad depending on what you had in mind. It’s a nice touch if you’re already balls deep in Razer’s ecosystem. At the moment, Mac users have to make do without Synapse, which means that lighting effects are limited to tasks like volume adjustment or bass level indication. 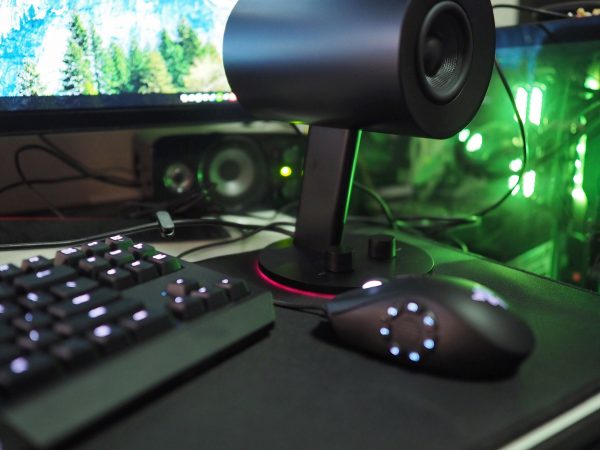 For S$229, the Razer Nommo Chroma is on the pricier side for fairly basic speakers. Essentially, you’re paying for the sleek, compact form factor and it’s ability to sound big and boomy without needing a large subwoofer added to the clutter. But there’s a place for the Nommo – other options in the price range include the likes of Logitech’s Z600 and the Edifier R1850DB. They all have their individual characteristics – the Z600 operates via Bluetooth and has a tower design but it’s not as bass-heavy, while the Edifier is more of a traditional bookshelf-type speaker that needs to be played loud to shine. So, there’s definitely a place in the market for the unique design and speaker qualities of the Nommo. Technically, you can save some money by going the non-Chroma route, which knocks a cool S$60 off the price if you don’t need the lights and the built-in DAC.

We are Team GameAxis. And we will play games for food.
Previous post Microsoft are giving away a custom Xbox One X signed by Real Madrid players
Next post Review: Stifled is pulled in opposite directions by innovative yet repetitive gameplay