Update (30 Nov): Contest is over! Congratulations to our five winners.

Original: If you aren’t already excited for Mortal Engines then we’re here to try and fix that. In cinemas on 6 December, the movie adaptation of Philip Reeve’s novel brings together an experienced crew of visionaries poised to bring his steampunk, post-apocalyptic world to life. You’ll want to read on, because we have invites to the premiere up for grabs.

The gigantic Traction city of London, churning the earth in search of others to cannibalize. The last of the Resurrected Men, hell-bent on hunting down its target. The allied forces of the Anti-Traction League, guarding their green paradise with airships and an indomitable wall.

And amid it all, an assassination attempt that’s set to change the course of the future.

Mortal Engines boasts the sort of world and premise that’ll have geeks of all stripes buzzing with excitement, and some of the credentials behind the movie paint a promising picture.

We have the Oscar-winning visual-effects artist Christian Rivers (King Kong) directing, the accomplished Peter Jackson (The Hobbit) joining Fran Walsh and Philippa Boyens on screenplay, and a team from the celebrated Weta Digital working the film’s visual effects.

They’re joined by a cast made up of Hera Hilmar and Robert Sheehan in the leading roles, supported by names such as Hugo Weaving, Jihae, and Stephan Lang.

“Hundreds of years after civilization was destroyed by a cataclysmic event, a mysterious young woman, Hester Shaw (Hera Hilmar), emerges as the only one who can stop London — now a giant, predator city on wheels — from devouring everything in its path. Feral, and fiercely driven by the memory of her mother, Hester joins forces with Tom Natsworthy (Robert Sheehan), an outcast from London, along with Anna Fang (Jihae), a dangerous outlaw with a bounty on her head.”

It has all the ingredients for an action-packed, visual stunner at the cinemas, with enough material behind it to maybe spark a new movie franchise.

So, you want to catch Mortal Engines before everyone else does, right? Thanks to the good folks at UIP Singapore you stand a chance of doing just that.

We’ve got five sets of prizes to give away, each containing:

Here’s what you have to do:

Simple enough! And here are your three questions: 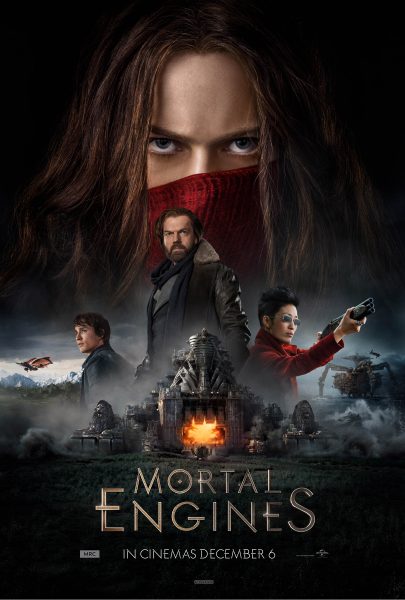 We are Team GameAxis. And we will play games for food.
Previous post Review – Not for hardcore fans but Pokemon: Let’s Go, Pikachu/Eevee! gets a few things right
Next post Review: X-Mini Xtlas+ is not the titan but comes pretty close