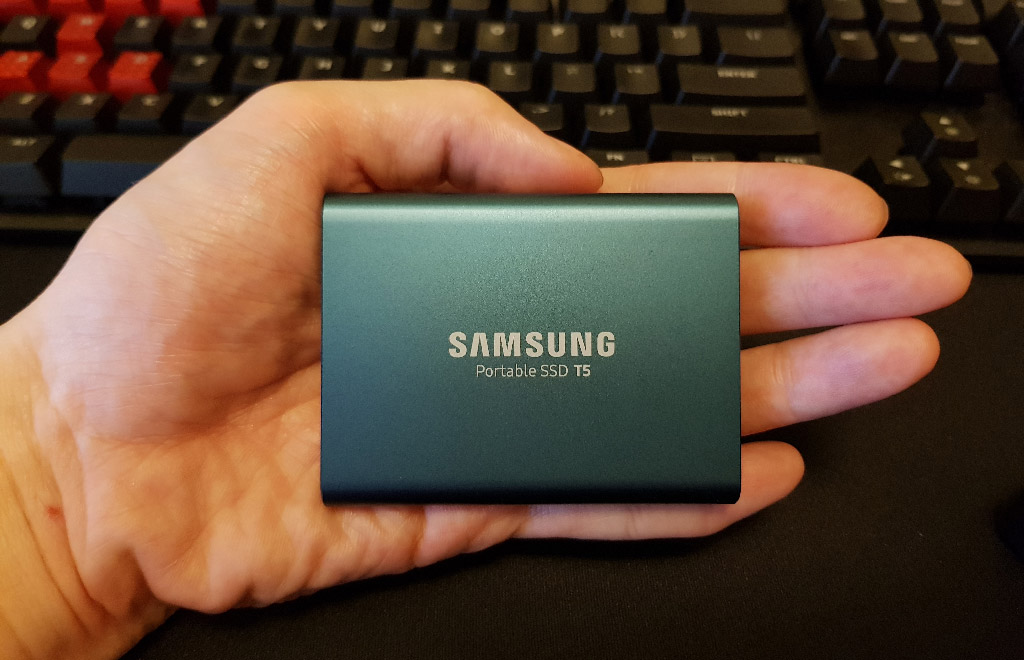 Samsung have been creating very impressive (impressively small and fast) portable SSDs for years now, starting with the T1 a couple of years back. They also make some of the best internal Solid State Drives (SSD) in the world, frequently winning the “Best Solid State Drive” award at our tech sister site HardwareZone‘s annual Tech Award showcase.

Their latest Portable SSD T5 comes with a super-speedy 64-bit TLC VNAND flash memory, which allows it to transfer files at very quickly. Unlike standard portable storage devices, the T5’s fast transfer speed also meant that running games off it does not have any slow-down or laggy effects. SSDs have no moving parts and thus nothing that can be dislodged during a fall, and the T5’s mini frame (it’s smaller than the length and width of an average name card) also has a shock-resistant internal frame which can handle drops from 2m. Ostensibly, this is a high-performance external drive, and for the serious professional users – photographers, video producers, or any folks that generate huge amounts of data on the fly and needs to transport them quickly and safely.

But with videogames’ installation size becoming increasingly larger, I suspect there is a use, even if it’s a niche one, for portable and fast drives like the T5 amongst laptop and console gamers. I have tested and used the 500GB version, which retails for S$279, as a companion to my gaming laptop to house my Steam games, and found that it is especially useful for laptop gamers, where storage space are usually scarce. The Portable SSD T5 is also available in 256GB (S$179), 1TB (S$559), and 2TB (S$1,229).

In AS SSD, I measured read/write speeds of 434.72MB/s and 435.94MB/s respectively over the standard USB interface, with that leaping up to 525.19MB/s and 538.32MB/s when I switched over to USB 3.1 Type-C. To put that into perspective, that’s faster than many SATA SSDs in laptops and the mechanical hard drives (HDDs) in today’s Xbox One and PlayStation 4 consoles.

For instance, loading an installed copy of Horizon: Zero Dawn from the SSD T5 when connected to my PlayStation 4 Pro only takes 39secs. Loading it from the PS4 Pro’s default internal HDD takes 1:14mins. That’s a lot of waiting time saved.

An excellent portable storage option but at a price

The Samsung Portable SSD T5 is a great all-rounder SSD for those looking to move or carry incredibly large amounts of data, and is an excellent showcase of Samsung being at the top of its game when it comes to NAND technology and producing a quality storage product.

That said, the Samsung Portable SSD T5 is undoubtedly a luxury purchase for most gamers. Spending S$1,229 for the 2TB version is rather unrealistic and overkill to house your extended gaming library, but the 250GB and 500GB version of the T5 are more reasonably priced in a manner of speaking. But if you are looking for the divine combination of speed and capacity, then there’s a price to be paid after all.

Aaron Yip is an industry veteran with more than 15 years of experience. When not spending time on his gaming PC and consoles, he can be found in Hyrule solving ungodly puzzles and collecting gems.
Previous post Review – Gundam Versus (PS4) is strictly a fan service affair
Next post GameStart 2017: Made in Singapore