Hands-on with the ASUS ROG Phone 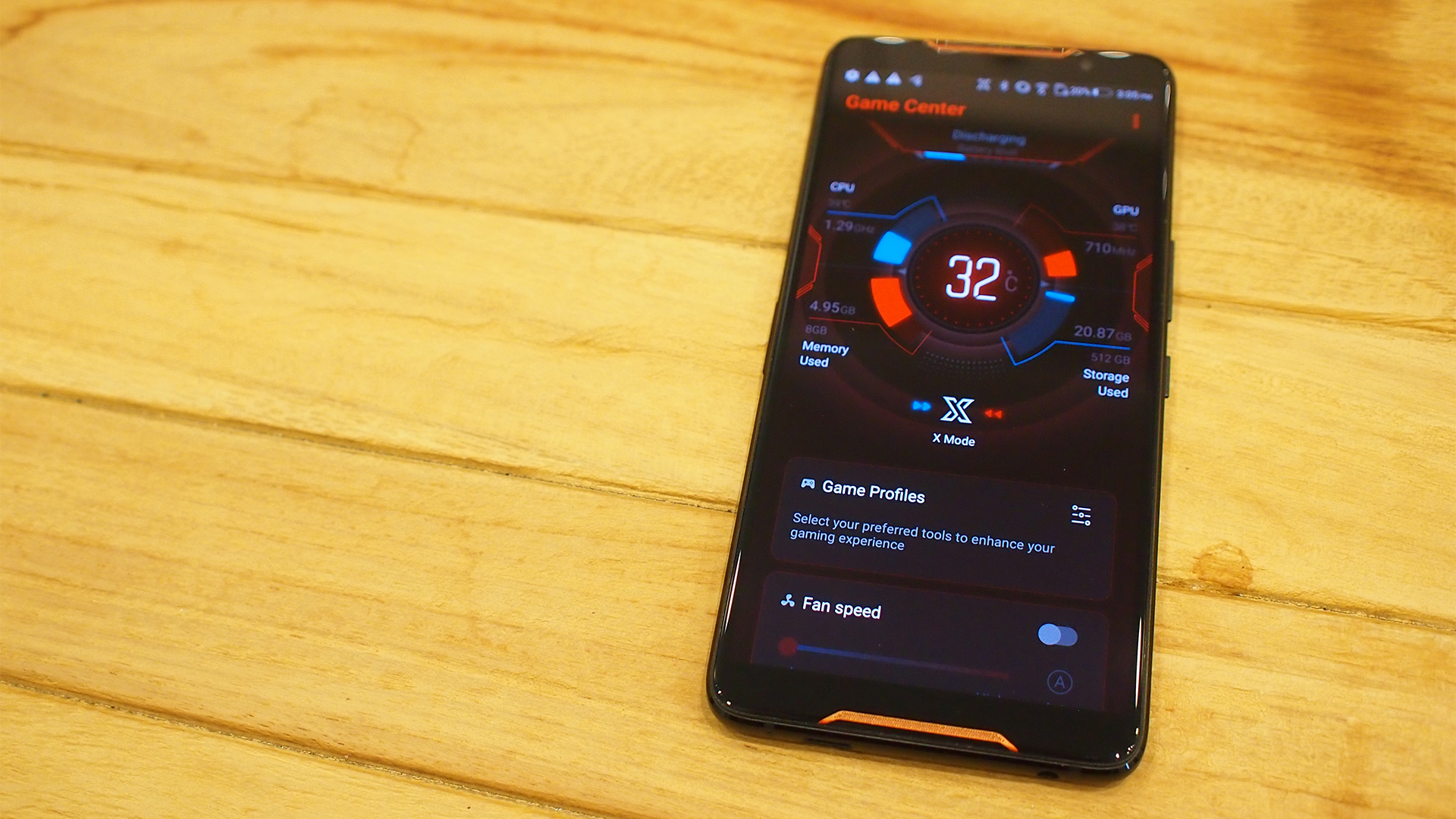 ASUS already sells smartphones, so it makes sense for their Republic of Gamers (ROG) brand to follow suit. In the wake of the “gaming phone” revival comes the ASUS ROG Phone, packed with high-end hardware and designed wholly with gaming in mind. We dare say they took a few steps further than Razer, too.

Running on Android Oreo 8.1, the ROG Phone looks fairly contemporary up front. The display is framed by black edges less than a centimeter thick at the top and bottom, with its largest visual standout being the copper-grilled front speakers. In all, it looks like standard pre-notch design philosophy and won’t raise any judgmental eyebrows.

It’s on the back where things take on a decidedly flashier aesthetic. The bulk of the rear case comprises a shiny black-silver glass, bearing both the the ROG logo and the words ‘Republic of Gamers’. Sharp circuit-like lines trace across the top quarter, where the antennas, fingerprint sensor, and dual cameras are located. You’ll also find flashes of copper here, this time for a heatsink embedded in a matte plastic section — ‘ROG Aerodynamic System’, reads the smaller stamped letters, which is basically a vapor-cooled chamber system much like what the Razer Phone uses.

Both curved glass comes from Corning Gorilla, though the front is 2.5D and the rear 3D — a combination of strength and grip respectively. Ringing the phone’s sides are the usual bevy of connectors: a USB Type-C port, a 3.5mm headphone/mic port, the power button, and a volume rocker. What’s new is a side-mount connector, one of the extra touches the ROG Phone has and something we’ll touch on later. 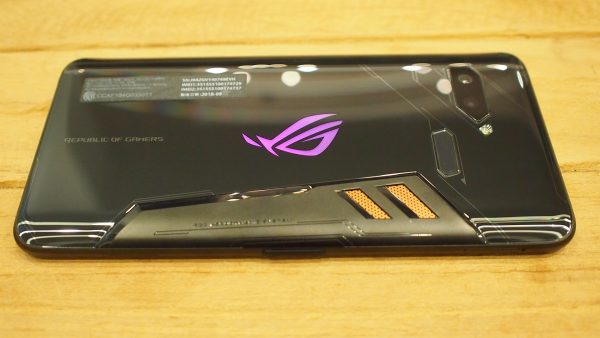 Inside the ROG Phone is the leading QualComm Snapdragon 845 processor and matching Adreno 630 graphics chip, although the former is clocked at a higher 2.96GHz instead of the usual 2.8Ghz. Packed alongside is 8GB of RAM, making for a core trio that’ll handle the latest and most demanding of mobile games. Storage comes in 128GB and 512GB flavors, though ASUS are also bundling in 100GB of Google Drive storage valid for a year. There isn’t any expandable storage, however, with the card tray only accepting two nano SIM cards.

Turning it on you’ll see the 6-inch FHD+ (2160 x 1080) AMOLED display coming to life, which looks gorgeous indoors but not so much under the noon sun. The tech sheet states a brightness of 550nits, which is easily outstripped by flagships such as the iPhone X or Galaxy Note 9, though you could argue that nobody is going to game for hours under the sun anyway. Instead, what it does feature is the wider DCI-P3 color space, HDR support, a 90Hz refresh rate, and 1ms response time — all to make that indoor gaming experience a whole lot better.

Those seemingly small speakers are backed by pretty bold sound, too. Those dual front speakers are capable of getting very loud — something you’ll immediately notice at startup — and with acceptably low distortion. You can push it even louder by enabling Outdoor Mode in the volume settings (just hit the rocker), boosting mids for emphasized vocals at the expense of everything else. If you’re not some antisocial maniac then plug in a headset instead; the onboard DAC supports high-resolution (192kHz/24bit) audio and DTS-X, so you have little reason not to. 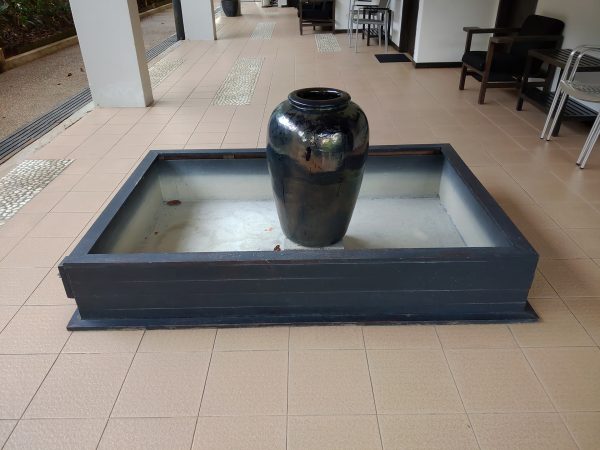 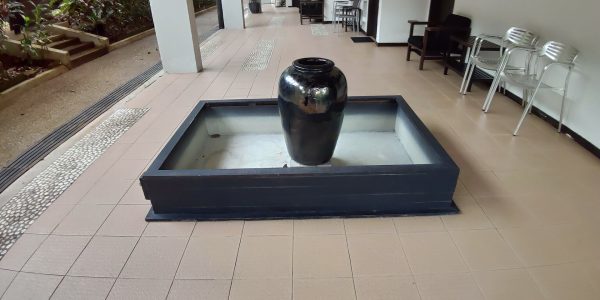 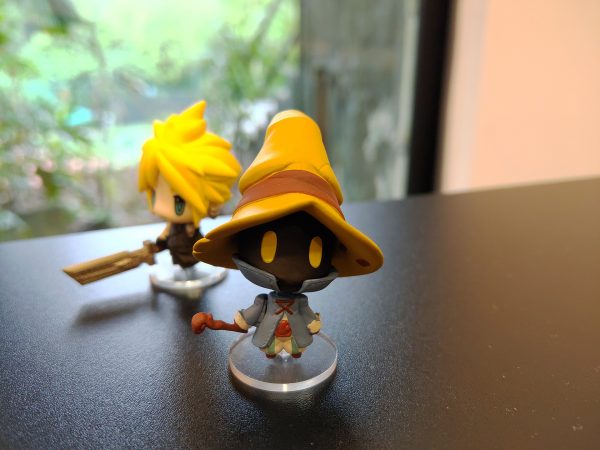 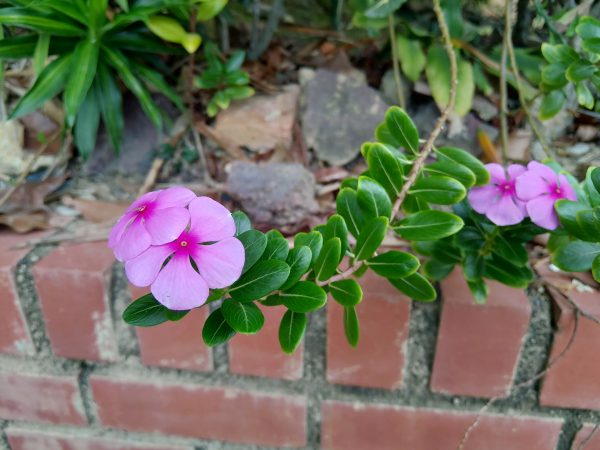 The rear cameras are good enough for a 2018 purchase but not exactly a highlight. The main camera is a 26.6mm equivalent matched to a 12MP Sony IMX363 dual-pixel sensor, while the secondary is a 12mm equivalent — giving you what are ostensibly two wide-angle lenses. It’s a puzzling decision on ASUS’ part, and a move that might detract gamers who have grown fond of their flagship zoom cameras. It does come with AI support along with HDR and beautification modes, while the PixelMaster app includes features such as 48MP Super Resolution, a Pro Mode, and Google Lens built-in.

On the software front is the ROG UI, sporting a theme that’s familiar to anyone who has used their Game Center desktop apps. It’s snappy and didn’t present any visual bugs or slowdowns during our time with it, though the strong look might be a point of contention for most. If that’s the case, just open up ASUS’ themes app to see an exclusive Gamers Domain category for the ROG Phone — there are 10 free themes as of writing.

Of greater interest is the mobile Game Center app, which functions just like its desktop counterpart. You get a system monitor with usage and temperature readings, options to adjust fan speed on the included AeroActive Cooler accessory, and Aura Lighting controls. Yes, this phone does have RGB lighting on it, strobing away via the ROG logo on the back when X Mode is on. You get full color, brightness, and mode control, as well as the ability to sync it with your ASUS ROG desktop or notebook. 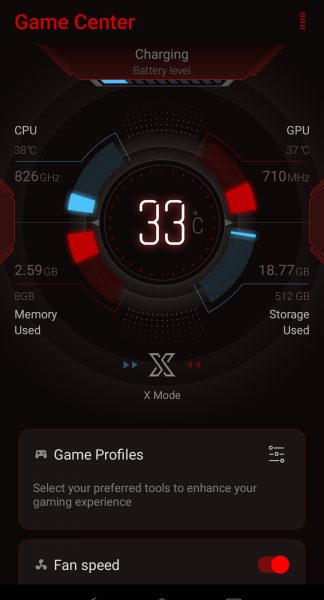 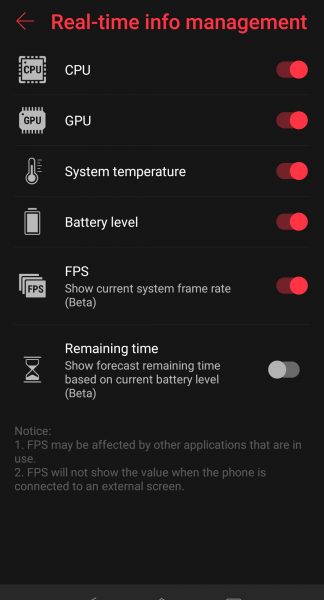 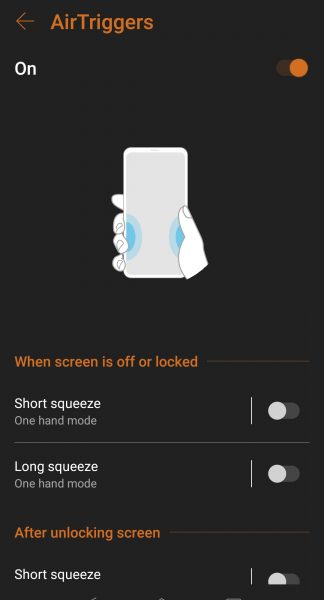 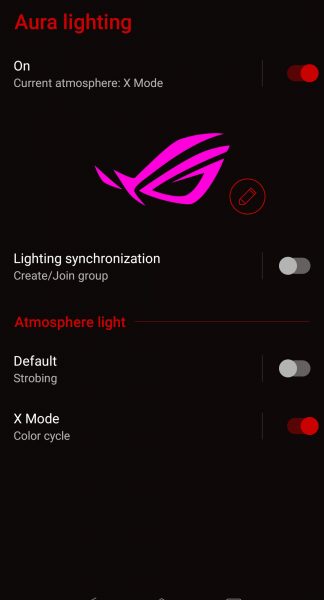 Yet that’s just the surface options. You can set up Game Profiles so that less demanding games could use less CPU power and a lower refresh rate to save battery, or to have the phone ramp up and clear its background memory for full-blown performance. Alternatively, enable the aforementioned X Mode for a system-wide performance boost. This changes your ROG UI theme to red and switches on the Aura Sync lighting, so you’ll know when the device is ready to game.

Probing deeper, you’ll find the Game Genie settings in the Game Center’s dropdown menu. It’s another setting you can activate when gaming, appearing as a toolbar overlay with useful features such as automatically disabling notifications and rejecting calls; real-time monitoring for system temperatures, game framerates and remaining battery time; and options for recording and broadcasting. Given the prevalent rise of mobile gaming in both livestreaming and esports, it’s the sort of tool that certifies the ROG Phone as a dedicated gaming device.

Another bonus add-on are the programmable AirTriggers, which simulate bumper triggers on a controller for greater control flexibility. The phone shipped with FreeFire and Asphalt 9, both of which were good testbeds for this unique feature. However, these are sensors and not physical springs, so don’t expect sensitivity along the lines of an actual gamepad. They work fine for tapping on brakes or breaking out the nitro, not so much movement or other fine commands that the touch screen is must better suited for. 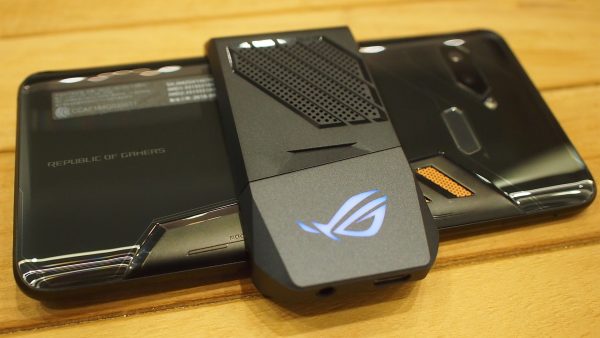 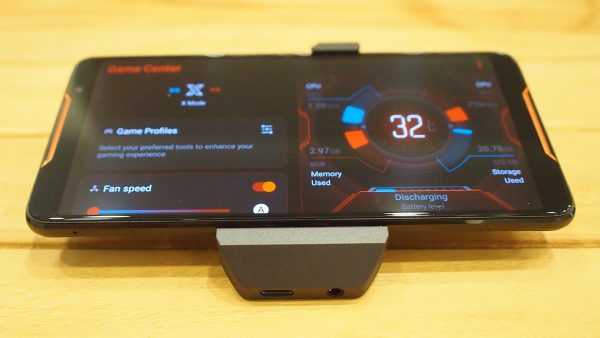 All that’s not counting the bevy of accessories ASUS have lined up. Included with the phone is an AeroActive Cooler, which mounts in the center for landscape gaming. It’s too bulky to be a permanent attachment, but what it does do is make gaming while charging viable. The accessory has a USB Type-C and 3.5mm ports so the cable won’t get in the way of your hands, and the additional fans help keep it a little cooler during this battery-straining task. The all-plastic build isn’t that great and the phone still gets a little toasty in your hands, but simply shifting the charging cable out of the way is such a huge quality-of-life improvement that it’s hard to fault it.

We didn’t get to try any of the other accessories, such as the GameVice controller pad or the highly curious TwinView Dock to emulate a Nintendo 3DS. There are also less exciting options such as the various desktop docks, with some enabling mouse and keyboard support or plugging to an external monitor. However, they do build an interesting ecosystem for the ROG Phone, and it shows that ASUS are banking a fair bit of confidence in the product.

So how does it actually play? Honestly, we had mixed results. Games such as King’s Raid, PUBG Mobile, and Shin Megami Tensei Liberation DX2 showed fluctuating framerates, reflective of larger phone software issues such as looping or crashing Google login screens (that took us quite a while to get through). These happened with and without X Mode enabled, and might be solved in a phone update. Interestingly enough, BanG Dream! Girls Band Party, Survival Heroes, Azur Lane, and the included FreeFire and Asphalt 9 fared better by comparison, performing as one would expect for a similarly configured phone.

We couldn’t really tell how much of an improvement X Mode was bringing to those games, so we ran our own 3DMark benchmark tests with and without it. The Sling Shot Extreme tests gave us OpenGL scores of 4,601 and 2,623 respectively, and Vulkan scores of 2,904 and 2,893. That curiously puts our ASUS ROG Phone (Z01QD) review model at in the top 5 of the OpenGL rankings (as of 24 Oct), and we’re certainly eager to see how it holds up to the Razer Phone 2 when that launches and both are stable. 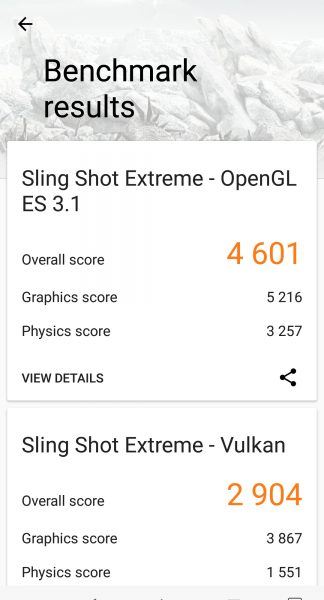 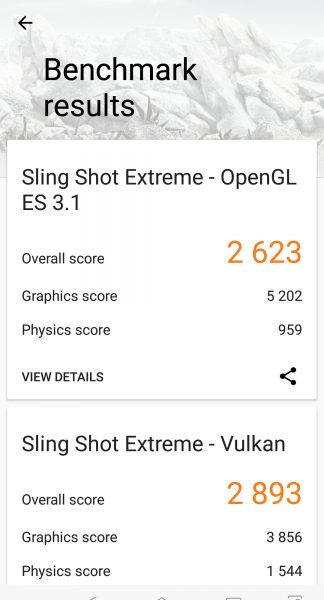 Just how much you value your mobile gaming time is a question any potential ASUS ROG Phone owner has to ask themselves. It’s a phone built for the task, in terms of both hardware and design, and it looks and feels great to use. The swathe of accessories paint some interesting possibilities too, though we’ll need some hands-on time with them to see whether they’re actually worth the trouble, or whether even all the games work well with them. Yet buying into the ROG Phone system does mean you’ll have to make sacrifices such as its cameras, and potentially a smaller user-support base should you run into any troubles. Otherwise, things are certainly looking up for the new gaming phone movement.

Ade thinks there's nothing quite like a good game and a snug headcrab. He grew up with HIDEO KOJIMA's Metal Gear Solid, lives for RPGs, and is waiting for light guns to make their comeback.
Previous post The GameAxis Playlist (November 2018): Xbox One
Next post Calling all Old Master Q fans!