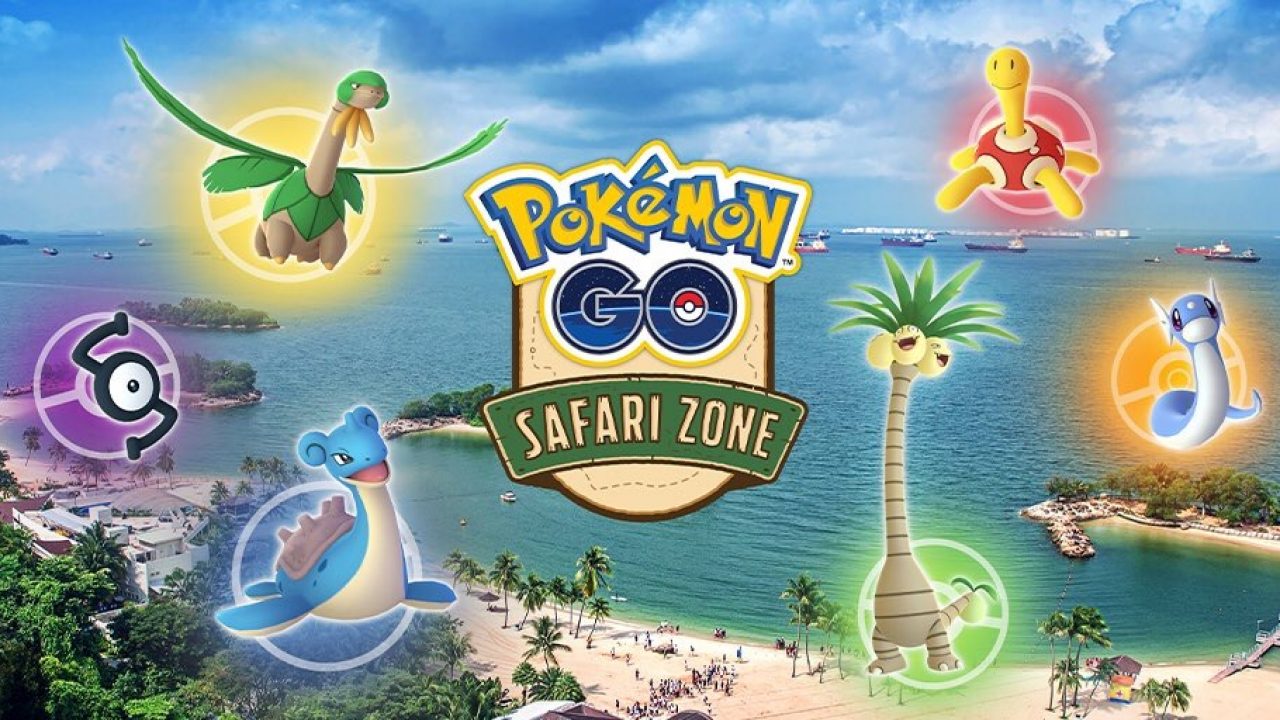 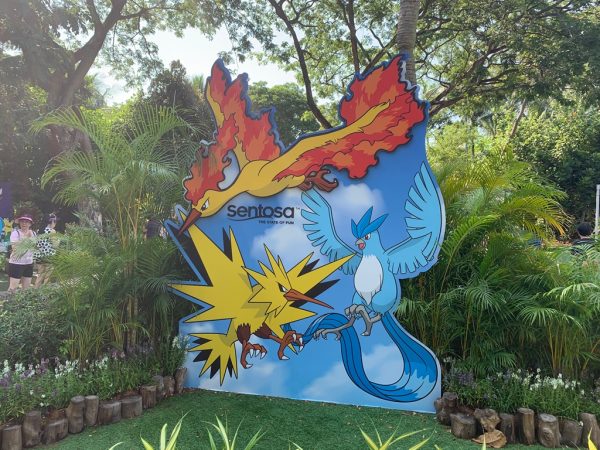 Which one of the three legendary birds is your favourite?

As usual, people (ourselves included) were having a love-hate relationship with the weather. Although we were happy that it wasn’t raining, the sun was blisteringly hot that day, so the air-conditioning of the nearby restaurants seemed irresistibly tempting. But no, it would take a lot more than that to deter us. Not with a ton of rare Pokemon (and photo opportunities!) on the line.

And so, with Pokeball in hand, Pikachu visor on our heads and steely (albeit sweaty) resolve in our eyes, we set out on our Safari Zone adventure. 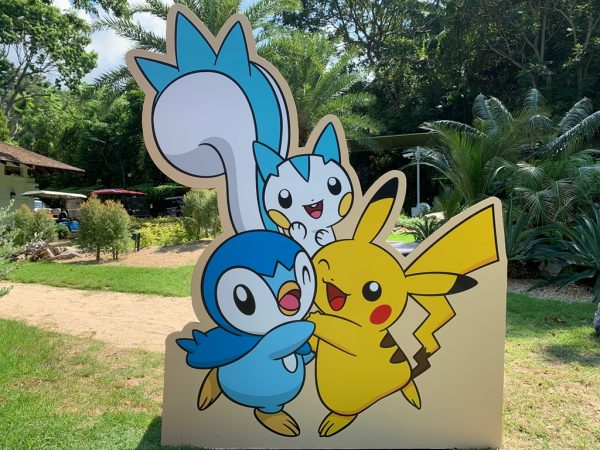 People often say the best way to enjoy something is to get into the right mood. To the organisers’ credit, we think they did an amazing job. Want to know what sealed the deal? Remastered Pokemon music, playing nearly every step of the way. Yup, even in the gents. We could have sworn people were whistling Route 1’s tune in the washroom, which was both amusing and a little strange. Not that we were surprised anyway, since we were humming along to the remastered Gym Leader tune at some point too!

Well, we’ve got to hand it to the organisers for playing on nostalgia.

Apart from the music, there were numerous Pokemon standees and small merchandise booths dotting the path, alongside several advertisements for the upcoming Detective Pikachu movie. Some of the standees were also placed to reflect the habitat of particular Pokemon. For example, we had a Raticate standee hidden among some bushes while a Kabuto standee sat patiently next to a pond. And of course we have this one…anyone got a Poke Flute? 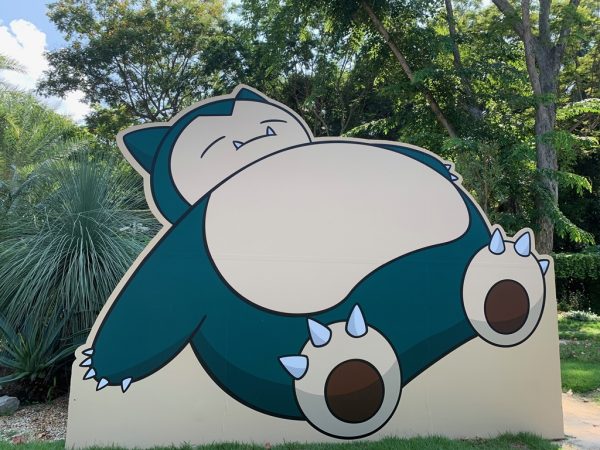 This is totally NOT us at the office…most days. Ahem.

It’s a nice consideration, and makes the experience feel more authentic in a way. There were also tents set up along the way for each of Pokemon Go‘s three teams: Valor, Mystic and Instinct. Players could take a break, have a sip of water, and even charge their devices here if needed.

However, what really caught people’s attention was the 6-metre tall Lapras floatie sitting just off the shore. Oh, you gorgeous thing. 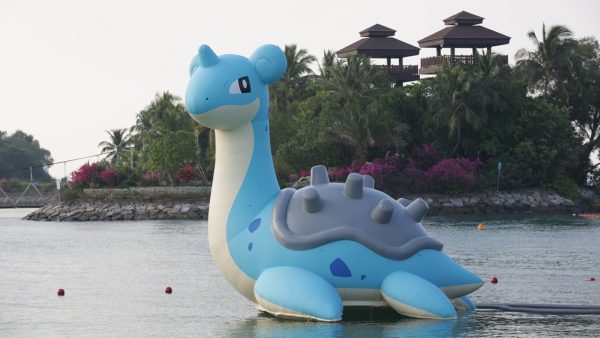 Mommy, can I take it home?

Naturally, the main topic of any Pokemon Go event is the rare Pokemon. Although legendaries might still be few and far between, we were quite content with the roster of region-exclusives. For us, the main attraction was the Fruit Pokemon, Tropius. We (and everyone else) leapt at the chance to catch the green, leafy dinosaur, which is usually limited to Africa, South Spain and Crete. Other notable Pokemon included Lapras, Dratini, Alolan Exeggutor, Shuckle and Unown, all of which are usually hard to come by.

For the competitive crowd, Shuckle is pretty important. Sporting the lowest CP and Atk (attack) values in the game, it might seem like a pushover. However, Shuckle also sports the single highest Def (defense) stat in the entire database, making it a viable tank option.

Meanwhile, Unown holds significant value as a “collection” Pokemon, since it has 28 different forms. There’s one for each letter of the alphabet, plus two more representing the exclamation and question marks. It may not be powerful, but who cares when you’ve got bragging rights? In fact, we met Trainers who were more interested in completing their Unown collection than catching Tropius or Shuckle! 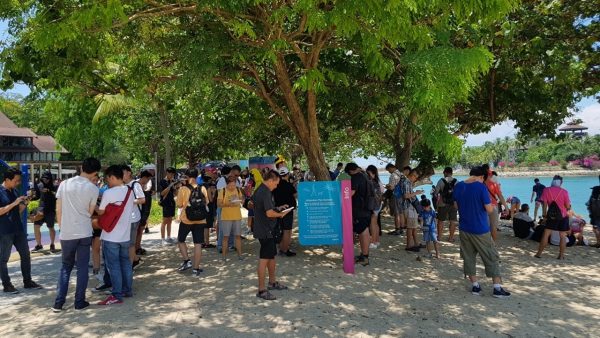 Just one of many crowds, at one of the many PokeStops.

Dratini, Lapras and Alolan Exeggutor are more of fan favourites. Dratini’s final evolution, Dragonite happens to be particularly popular, especially among veterans, and for good reason. Not only does it have a reputation for being good natured, it’s also viable competitively.

Alolan Exeggutor is…quite literally a walking meme, so much so that you can’t even see the entire Pokemon when you’re trying to catch it. That said, it is as rare as it is meme-worthy, so once again we found ourselves reaching for our Poke Balls.

Excuse the inner geek, but let’s get back on track. The event had much more to offer than rare Pokemon and cute standees. In the evening, fans were treated to a special Pikachu Mini Lightning Parade at Palawan Green. Apart from being hilarious and entertaining, it was also rather heartwarming. Seeing people of all ages gather over the shared passion that is Pokemon…all we can say is that it truly warms the soul. 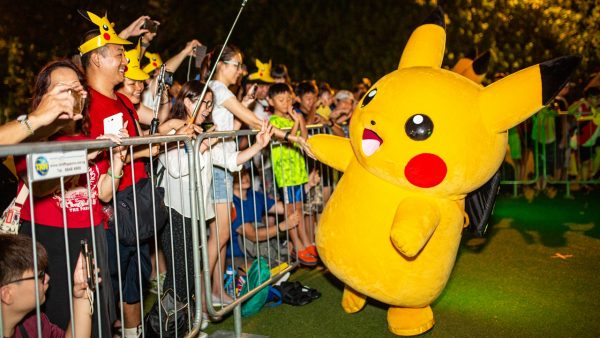 At the end of the day, the word “bushed” didn’t do our exhaustion justice. Yes, the weather wasn’t exactly ideal, but it was still a lot of fun and our only regret was that our passes were only valid for Thursday! Objectively speaking, this is a really smart play on Niantic’s end, and after seeing the crowds that gathered, we’re confident that Pokemon Go, and by extension the Pokemon community will only grow bigger in future.

Kenneth is your dedicated jack of all trades gamer and borderline anime nut. When not writing, he likes to wind down with Overwatch, Apex Legends and a bit of Fate: Grand Order on the side.
Previous post Review: DreadOut is a horror movie, minus the horror
Next post Netflix’s Playing Hard puts the spotlight on videogames development