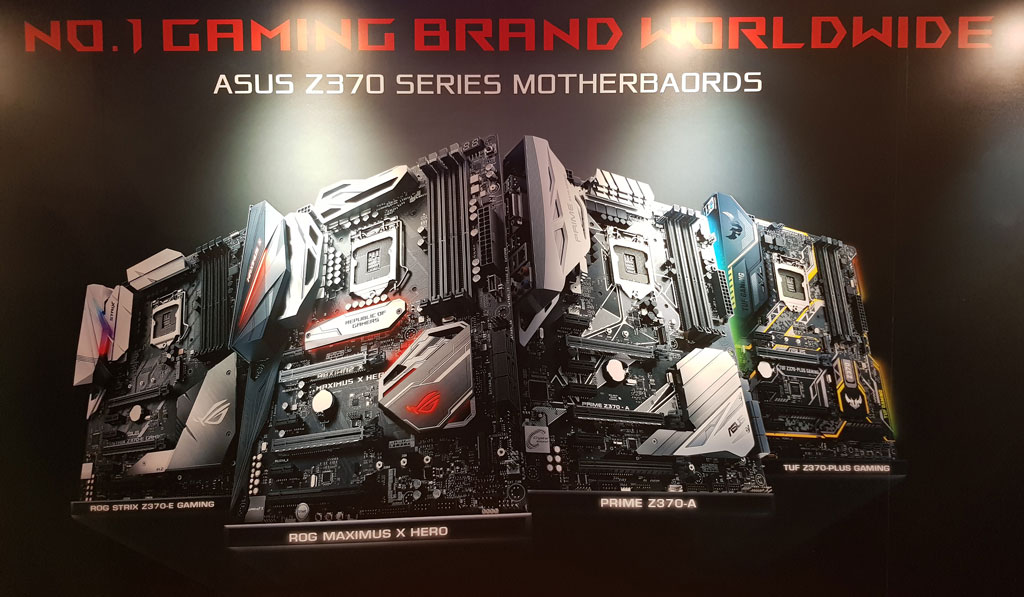 ASUS has revealed its new line-up of Intel Z370 motherboards, which supports Intel’s 8th-generation Coffee Lake processors. ASUS’ range is diverse as it caters to everyone from extreme overclockers to casual gamers looking for a reliable board.

We were invited to the launch event in Kuala Lumpur earlier this week, and had the chance to see nine Republic of Gamers (ROG) Z370-based motherboards. Gaming has always been a huge part of ASUS’ core business, and it’s not surprising that the bulk of it are the company’s gaming-focused ROG branded boards. Here they are:

The Maximus boards sit at the top of the product stack and are targeted at the PC / Gaming enthusiasts, while the ROG Strix models slot into the middle. The latter is targeted at the slightly higher-end mainstream audience. At launch, the ROG Maximus X Formula will be the top-end Maximum board available in the Z370 line-up, at least until the Maximus X Extreme makes its appearance. We weren’t sure why the Extreme wasn’t shown at the event, but an ASUS representative did confirm that the Extreme is part of the Z370 line-up.

The ROG Maximus X Formula is the company’s top-end Z370 board, for now.

That said, the Formula, with the trademark ROG Armor, is still a striking board to behold. The Extreme board might be targeted at the dedicated enthusiasts with deep wallets and with a penchant for liquid-cooling, but the line between these two boards are grayer than ever – the Formula comes with hollow copper channels built into the VRM heatsink, making it easier to integrate with custom liquid-cooling setups too.

The Maximus X Formula also features three full-length PCIe 3.0 slots, but only two are able to run in x8/x8 mode, unsurprising given that both AMD and NVIDIA are now actively limiting multi-GPU configurations to just two cards. There are also a handful of new additions, such as a LiveDash OLED display. This can be customized with an image or animation (in .GIF format) of your choice, or it can simply be set to display certain hardware monitoring information, such as CPU temperature. Have a look:

One of the two M.2 sockets has also been outfitted with a dedicated heatsink that links to that of the PCH, which supposedly helps with heat dissipation because of the larger surface area available.

The integrated I/O shield has been tweaked as well. There’s no longer any need to install the frame before fitting the board in place, and ASUS says the new design enables greater contact between the I/O shield and onboard connectors, which improves protection against ESD discharge.

The new Apex is a unique one. Unlike the rest of the boards shown, it only comes with two DIMM (memory) slots and supports up to 32GB of DDR4 RAM. Although it will supposedly be happy with modules overclocked to as high as 4,500MHz.

It also features a DIMM.2 socket, which actually looks like a memory slot (it’s located next to the actual two DIMM slots). But it really holds a DIMM.2 add-on card that has space for two M.2 drives.

The Apex also features just four SATA 6Gbps ports, instead of the usual six found on most of the other boards. However, in keeping with its focus on high performance, it is equipped with an Aquantia AQC-108 5G PCIe card for higher speed Ethernet connections, should you actually have access to one.

The PCB also comes in a unique ‘X’ shape, with cutouts along the edges. A bunch of DIP switches and buttons sits at the top right, where you’ll find things like switches to disable individual PCIe slots, a debug LED, and even voltage measurement points.

On the other hand, the Maximus X Code is sort of a pared-down Formula board, with a very similar look but missing some of the more enthusiast-oriented features, such as the liquid-cooling channels.

At the end of the Maximus X range is the Hero. It’s intended to be the more affordable Maximus ROG boards, and so some liberty were taken to make it so. For instance, the ROG Armor is absent, along with the M.2 heatsink found in the above ROG boards. But it is still a Maximus board after all, so there are still sensors for flow rate and coolant temperatures, and dedicated pump headers.

The Strix series are the mid-range members of the ROG family, and the most striking difference is the lack of the ROG Armor across all the boards. It also does not come with sensors or pump headers that water-cooling enthusiasts will want. That said, if you don’t need any of these features, the Strix series are great value-for-money options.

If the names of the five Strix boards appear to be similar and confusing, you are not alone. So we asked, and ASUS tell us that the -E, -F, and -H boards correspond to the Extreme, Formula, and Hero boards in the ROG Maximus range. That means, in essence, the ROG Strix Z370-E Gaming is actually the most feature-rich board here, so it also corresponds to the Maximus X Extreme boards (It’s also a big hint that the Extreme will be launched).

It comes with onboard Wi-Fi, which the Z370-F and Z370-H lack. It does come with an M.2 heatsink similar to the one found on the pricier ROG Maximus board though. I was intrigued most by the lower-end Z370-H though, as it looks the most visually striking of the Strix boards with its splashes of red around it.

The ROG Strix Z370-I is really tiny, but packs quite a punch.

For mini-PC builders, ASUS ROG got your back too. The mini-ITX and micro-ATX ROG Strix Z370-I and Z370-G completes the ROG Z370 range. The -I and -G suffixes actually point to the older Impact and Gene naming respectively. Don’t let the compact size fool you though. he ROG Strix Z370-I still manages to cram in two M.2 sockets, four SATA 6Gbps ports, one USB 3.1 front panel connector, and onboard Wi-Fi.

ASUS have yet to announce the exact price and availability of the above boards, but I will update them here as soon as I know more. It’s likely that the boards will coincide with Intel’s Coffee Lake launch on 5 October, but the Maximus X Formula, Code and perhaps the Extreme may arrive later in November. ASUS also showcased the TUF and Prime range, but these are targeted at non-core gaming market. If you’d like to know more, head on down to our sister site HardwareZone for more details.

Aaron Yip is an industry veteran with more than 15 years of experience. When not spending time on his gaming PC and consoles, he can be found in Hyrule solving ungodly puzzles and collecting gems.
Previous post Review – FIFA 18 (PS4) brings steady improvements to the series
Next post Gravity Rush 2 services go offline on 19 January 2018