Graphic cards that are optimised for work and play tend come in many forms and flavours. GIGABYTE’s gaming hardware arm – AORUS – believes there is no need for such distinctions, especially if when it is about its most powerful offerings. While they are not made equal, these top-end entries will deliver maximum performance. Hence, all AORUS GTX 2080 GPUs – like the water-cooled GIGABYTE AORUS GeForce® RTX™ 2080 WaterForce 8G and WaterForce WB 8G, or the air-cooled GIGABYTE AORUS GeForce® RTX™ 2080 Super 8G – with their own cooling and overclocking capabilities, promise that they will offer the very best in graphics delivery. Other next-gen GPUs from AORUS include the AORUS XTREME WATERFORCE, XTREME 11G and 8G, XTREME, Gaming, and OC line-ups.

What came into the Test Lab for this review happens to be the GIGABYTE AORUS GeForce® RTX™ 2080 Super™ 8G. For those keen on just plugging a high-spec GPU and getting into their games quick, then this air-cooled entrant is the highly-suited for the task. It’s only a matter of unboxing the GPU, removing two slot-plates on the backplane, jacking in this oversized graphics card, and plugging in the cables. Fire up the PC after, install the necessary drivers and AORUS control panel, and – as promised – gamers can immediately start playing their games in unadulterated 4K HDR graphics. 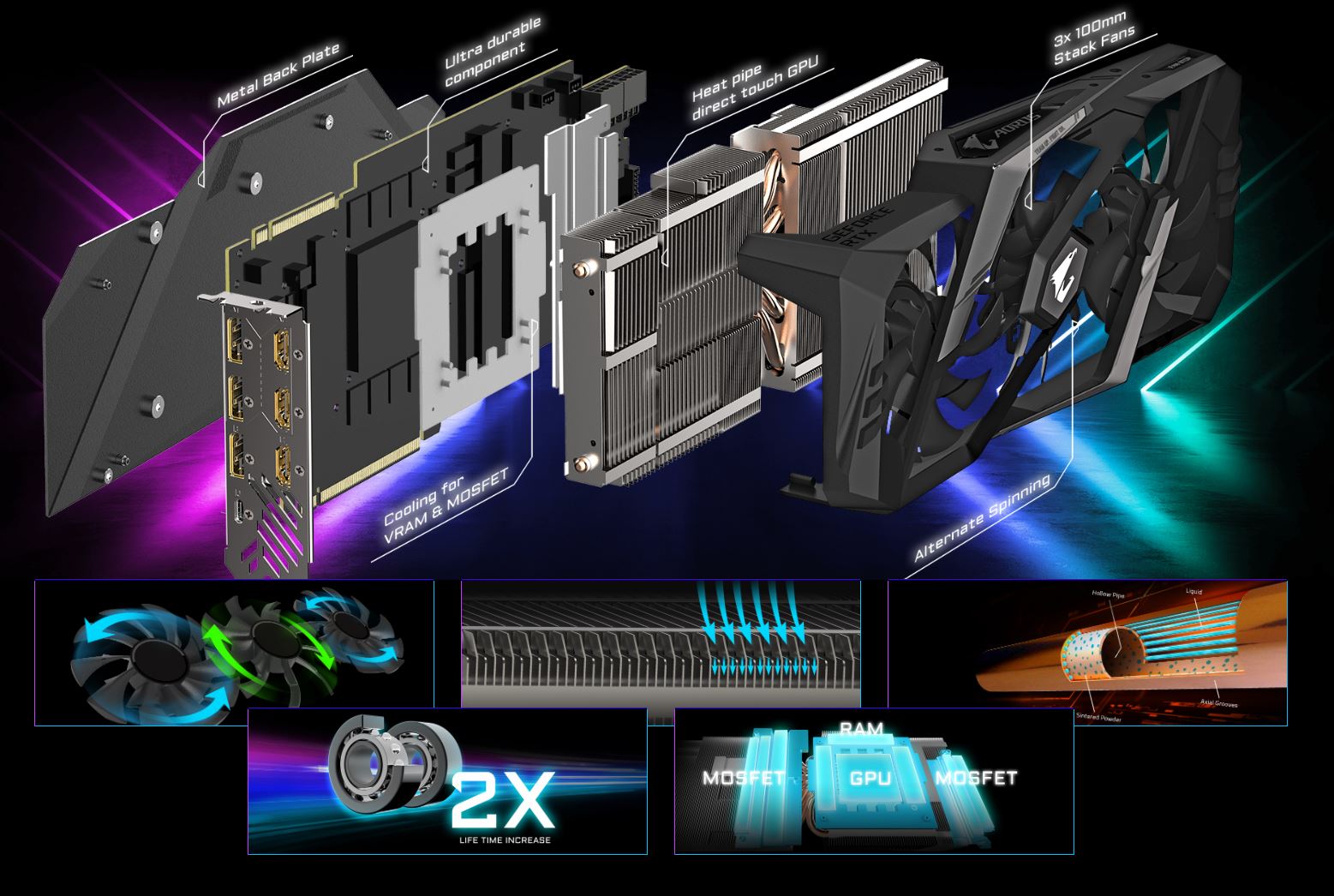 The GIGABYTE AORUS GeForce® RTX™ 2080 Super™ 8G is massive all around. From its packaging to the protective shell, and the GPU itself – nothing is spared to make the videocard look and feel hefty. By its looks alone, this graphics processor is not to be underestimated as its cooling shroud – called the WINDFORCE Stack 3X – sports three 10mm fans that sits on top of a massive heat-sink.

From the top, if one looks closely, there is a bigger-than-normal heat-pipe exchange that runs inside the cooling block. This, along with the WINDFORCE Stack shroud – GIGABYTE’s most innovative cooling system to-date – will keep the GPU chip, VRAM, and MOSFETs running cool at all times. In fact, the thermal performance is top-notch, especially during overclocking sessions, as tracked temperatures didn’t go beyond 65°C. Up front, this air-cooled videocard has a military-esque look as it combines the AORUS Wings of Excellence concept with an all-black colour scheme and silver accents for the backplane and ‘wing tips’. Even the full-metal backplate at the rear, to prevent weight warping, comes in black.

Offsetting this cool black look is the cooler, and more decked out, RGB lighting that the AORUS RTX™ 2080 Super™ 8G rocks. Instead of going all out on the LEDs, AORUS opted for subtlety as the outer rims of the fans and the AORUS ‘Eagle’ logo on the front, back, and AORUS logo and Fan-Stop button on top come with RGB lighting. The backplate RGB, not too bright or made to go bonkers, is a nice touch. Personally, how AORUS pulled off the RGB look is classy, making it the one to beat right now.

There is a purpose for using edge-lighting on the cooling fans. Instead of making it go flat-out in terms of brightness, AORUS included some cool and creative effects that takes the design visual of the GPU to another level. Among the ten modes offered, the most interesting are the Three-Colour Cycling, Dazzling (dotted lines), Colour Shift, and Claws. If anything, AORUS has redefined how GPUs can make a strong case in the RGB space. 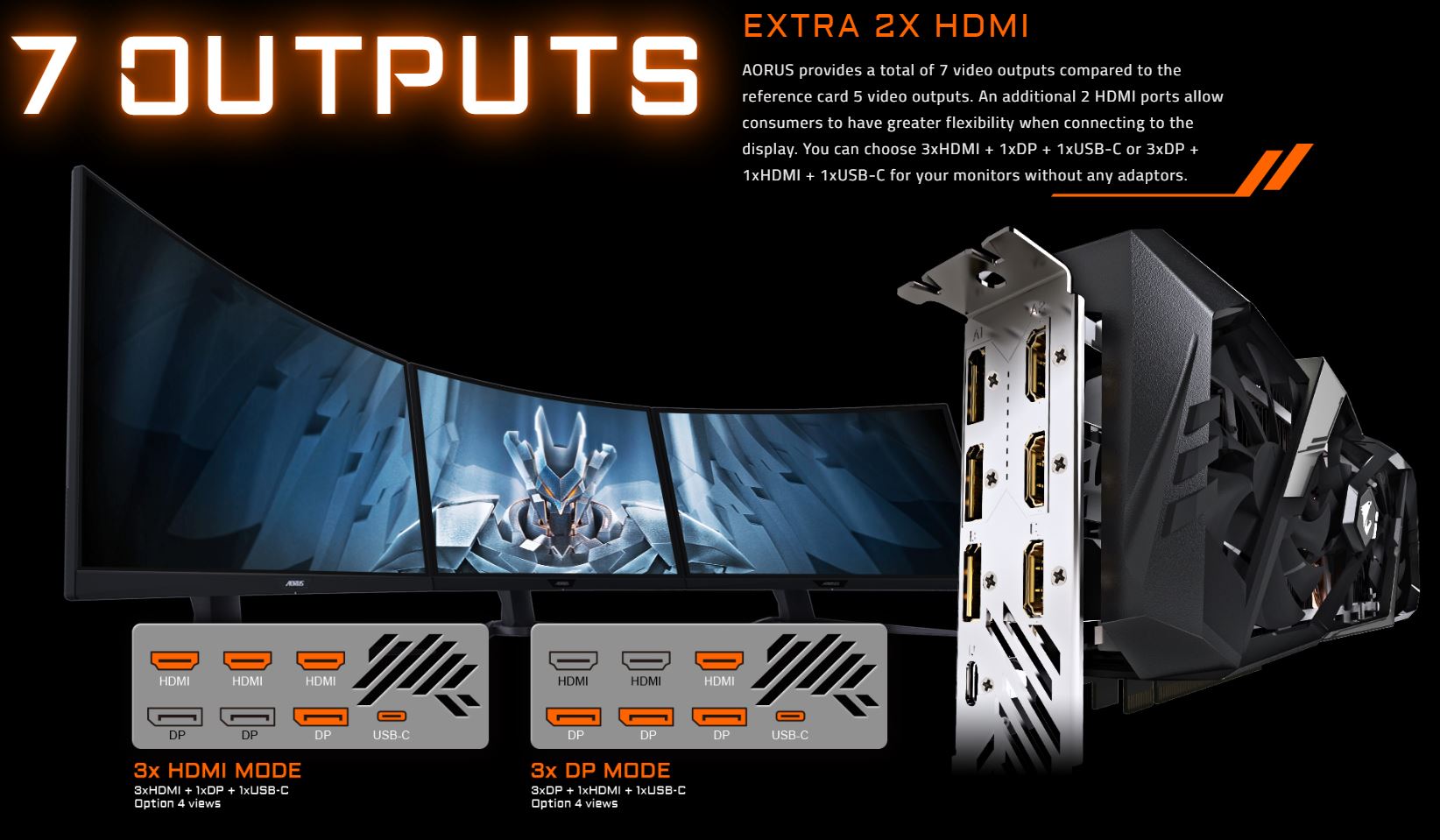 While the front and back looks amazing, equally as impressive is backplane and its spruced up I/O panel. Instead of the usual two HDMI and one DisplayPort configuration, the AORUS RTX™ 2080 Super™ 8G comes with seven video outputs! Featuring three HDMI 2.0b ports, three DisplayPort 1.4 inputs, and one USB 3.1 Type-C jack.

Having that many ports, while an awesome to-have feature, does not mean one can hook up seven displays simultaneously. Instead, only four monitors can be used as one seamless monitor array at a time. AORUS only allows all three HDMIs and one DisplayPort or in reverse to run together. While having four monitors looks impressive as it’s a literal feast for the eyes, it’d be more awesome if seven monitors can be chained into one mega display too.

With its next-gen cooling and sophisticated design, how does it fare with real-world tasks? Paired with an 9th Generation Intel Core i7-9xxx CPU with 32GB (brand) (specs) RAM and an 4K 144Hz gaming monitor/2x array,the AORUS RTX™ 2080 Super™ 8G is allowed to go all-out. Games that have been tested – at base and boost clockspeeds – include Overwatch, Call of Duty: Modern Warfare, Mechwarrior: Online (MWO), and Total War: Three Kingdoms. Framerates for these games vary, with the first-person shooters racking up a 75 to 90fps (on 1080p) and 33 to 35fps (on 4K), while MWO and Total War: Three Kingdoms, respectively, scored around 110fps (for 1080p) and 98 to 105fps (at 1080p) and 34fps (at 4K). Benchmarks? 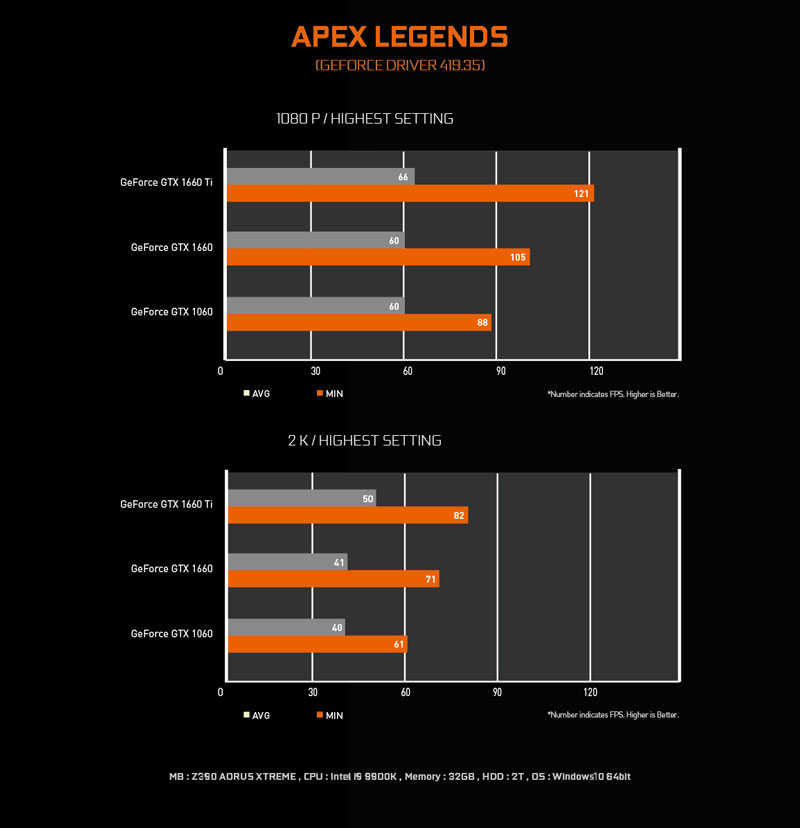 Game polygons looked ultra-crisp, even when upscaled to 4K, and the load times for shaders are near instant for a single monitor run. When running on two or four displays, render time took a little longer – at most 10 to 15 seconds more. It’s insignificant and the framerates didn’t drop at all. More impressive is how the games and benchmark tests didn’t dip at all when NVIDIA Ray Tracing is engaged. Shadows and lighting are more refined, realistic, and hyper-reactive. It almost feels like the real thing. Interesting fact, this proprietary NVIDIA feature is not unique to just the RTX line as the all-new AORUS GeForce® GTX 1600 range also comes with NVIDIA Ray Tracing capabilities.

Of course, this being a review, everything in the settings must be maxed out and turned on just to see if the AORUS RTX™ 2080 Super™ 8G struggles to put out hyper-realistic visuals with real-time lighting. After spending hours taking out rival armies and taking pin-point sniper shots, it’s clear this next-gen powerhouse graphics card took on everything with no issues.

If anything, the AORUS RTX™ 2080 Super™ 8G is ready for work and play. Even if the upgrade is more than just a name tweak and hardware re-optimisation, these improvements will deliver better visual performance. Those keen on upgrading or investing on a next-gen GPU, even for it is for a quick booster, will be able to play this year’s most anticipated titles at max performance. Even if that isn’t the case, this next-gen AORUS entry is more than suitable for those who want to amp up their gaming rig or are keen on pushing hard on the benchmarks and framerates for some impressive scores.

Gigabyte has an ongoing holiday promotion for their RTX™ 20 Super™ and GTX series of graphics cards – check it out here!

We are Team GameAxis. And we will play games for food.
Previous post Check out the Darksiders Genesis Collector’s and Nephilim Editions!
Next post The M15 gaming notebook is the new face of Alienware 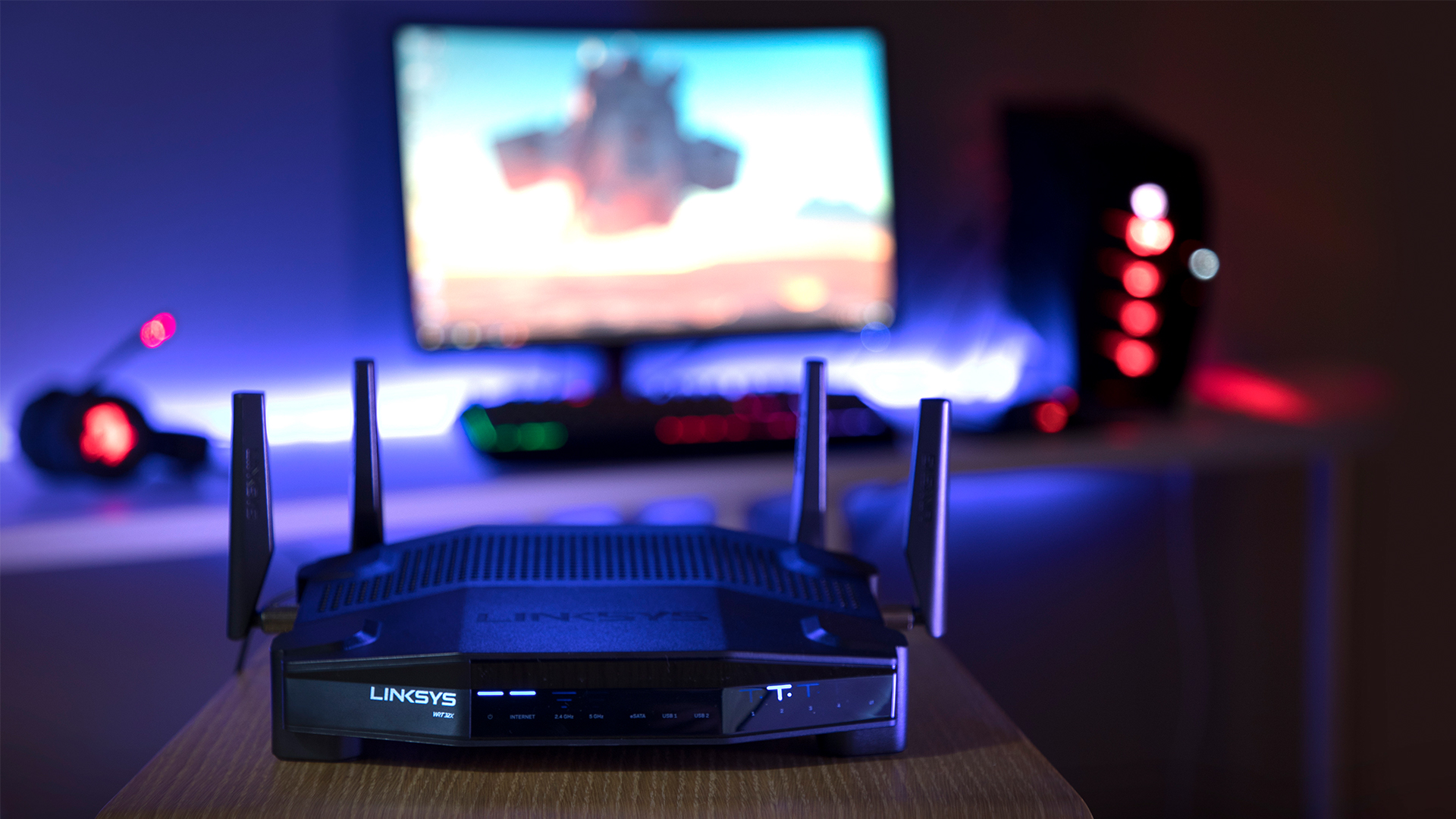 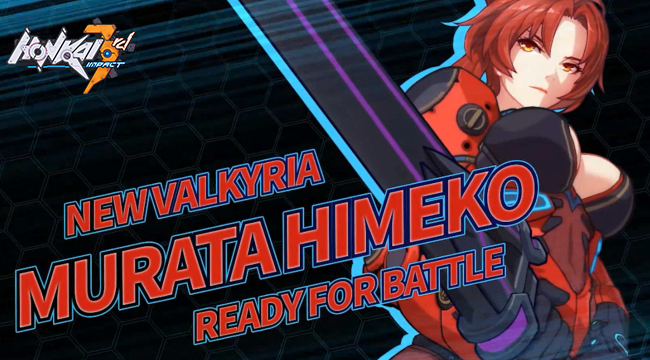