Making it’s global debut on the iOS and Android yesterday. Shin Megami Tensei Liberation Dx2 was developed by SEGA for the mobile market. The title may be a mouthful but SEGA promises the game will please longtime fans of the Shin Megami Tensei series.

Shin Megami Tensei Liberation Dx2 or Liberation Dx2 for short, features many of the classic gameplay systems of the series. It also sports fully rendered 3D models of all the Demons available. At the core, however, it is still a game about acquiring stronger Demons to battle foes and save the world. 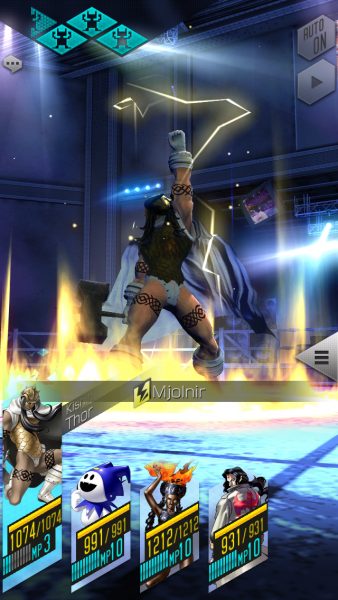 Players will gain or lose turns based on how they exploit the weaknesses of their enemies. This system is called the Press Turn-based system which may be familiar to longtime fans. Demons are both your enemies as well as your battle partners. They can be summoned by spending in-game currencies as is the norm for free mobile games with in-app purchases. Demons can also be acquired on the battlefield by talking and negotiating with them to join your side.

It is not a Shin Megami Tensei game if you can not fuse your Demons. Demon Fusion returns on Liberation Dx2 allowing you to fuse your Demons into more powerful ones. Liberation Dx2 also brings along new features like the ability to strengthen Demons through evolution and pieces of equipment called ‘Brands’. The game also has a special 3D dungeon crawl for those brave enough to challenge it.

Shin Megami Tensei Liberation Dx2 is a free game with in-app purchases. It is available now on both iOS and Android smartphones.

A bullet fired is better than two in the chamber
Previous post Hands-on with Assassin’s Creed Odyssey
Next post He came in like a Wrecking Ball! Overwatch newest hero

Relive your inter-school rivalries with cool characters in Campus Play

Check out the Darksiders Genesis Collector’s and Nephilim Editions!

Son Goku, Naruto, and Sailor Moon are just some of the ambassadors for the 2020 Tokyo Olympics